GOD VISITED ME IN BALDWIN, NEW YORK by Ryan Norman

A sad poem picked me up at the train station. I missed my stop and he was annoyed that I wasn’t paying attention. It was my first time traveling alone. The day was long. I traveled two hours into Grand Central Station and had to get to Penn Station to catch the LIRR. This was before Waze and Google Maps. I was lost before I started, but there I was. Eighteen, standing in front of someone I met at college orientation. I melted in his eyes—already a puddle from five hours of train travel—making connections, walking in the summer subway halls, tile lined, the floors covered in hot piss. Finally, with a poem, torqued verse twisting my emotions. He connected his iPod to the car radio and serenaded me with, “Dirty Little Secret” by The All-American Rejects. It was 2005, can we fault him for his opening number? Later I would come to find out he meant it. “Who has to know?” A lyric to deflate my confidence.

The truth is, I was my own dirty little secret. I had only come out to friends at this point in my life. My cover story was going to Long Island to stay with a friend I met only a month earlier to visit the beaches. It was seen through, of course. I later came to find out that my behavior was written off as a phase.

I remember sitting in a pizza place making small talk. He was kind enough to feed me. My stomach was full of electric butterflies. Eating wasn’t my priority; I wanted to be alone with him as he whispered sonnets directly into my heart. Somewhere we could be ourselves without ears signaling into our conversation. We had known a lot about each other. He went to a Catholic Prep school and played lacrosse. I had made all my sacraments up to that point and was on the rowing team. That’s not a lot, but for Queer folk, someone always feels some kind of way about the Church. I felt guilt. He did what felt right. We left lunch behind and headed to his home.

In Sunday School when I was eleven or twelve, the Church curriculum included sexual education. Sex is an act to be performed between men and women. My teacher had said that the Church wanted her to tell us that using condoms is sinful, because sex is meant to produce children. She leaned in and told us that if we are ever going to have sex, that we should use a condom. It was her way of being responsible and spreading the safe message. In my secular high school, years later, I would receive a much more thorough education on sex. But that was the word of the Lord. Amen.

We drove back to his house listening to all the best from Warped Tour. We were, after all, just a couple of Punk Rock Princesses. The house was lived in. It was nothing I was used to seeing growing up and visiting friends’ homes in spotless rooms. I met his parents and sister; they were all very nice. His mother offered me a spare bedroom, but this poem that crawls into your soul and sits there lied and said I’d be sleeping on the floor in a sleeping bag. I guess he wasn’t lying about keeping me his dirty little secret. We went to his room and staged sleeping bags on the floor. I was then complicit in the lie.

My church wasn’t openly homophobic. It was not something the priest or deacons talked about while reading from the Bible. Or if they did, it was when I was young, and I have no memory of it. But that sly wording in Sunday School sexual education made it pretty clear. Some of the kids I went to Sunday School with would bully me, mostly outside of church and in school. I know now that they learned it from their families. So, at the parishioner level, homophobia existed. But I persisted quietly along the walls avoiding attention.

We touched briefly, exploring new clothed bodies in an embrace. The butterflies were back, and they electrocuted every inch of my skin. It was going to be dark in a few hours, and we had plans to go to Jones Beach. We left the safety of a bedroom locked with a WrestleMania XX folding chair jammed under the doorknob. I changed my clothes. He didn’t look away.

The car ride was more of the same. Music. Touching. Lights lined the highway in a rhythmic pattern of spotlight glow and the dark space between, the car passing through checkpoints like a video game. When we got to the beach, the sun had already set. The ocean rolled in a silver-white shimmer tonguing the shore. We walked, fingers woven, along the crashing waves. The surf licked my heels. Together we climbed a lifeguard’s abandoned post and sat close for warmth, as the sea breeze wet our lips. He gently grabbed my face and kissed me. “I’ve never done this before,” I said. The moon illuminated my first kiss and pulled me closer to a poem that unfurls in your heart.

I sat awed and tingling. No one was around to see us trespassing on a beach at night, as a memory built under the moon. We drove back to his childhood home and kissed some more. Eventually, we fell asleep, but something woke me. Light filled the room and I shook. I pressed my nakedness against his, and he pulled me close. Two crescents waxing full. My tears evaporated on his flushed skin. God visited me in Baldwin, New York, as I lay naked in a bed with some guy I met at college orientation.

Nothing was said. Just a light floating at the foot of the bed watching me. I don’t know if it was a warning or a blessing. But I laid there against a poem to warm a cold night, silently crying. The guilt got to me, but it felt so right.

Ryan Norman is a writer from New York living in the Hudson Valley. Inspired by the landscape, he writes what he feels. He enjoys climbing tall things and swimming in mountain lakes. His work has appeared in From Whispers to Roars, Elephants Never, Vamp Cat Magazine, 3 Moon Magazine, Twist in Time Magazine, Black Bough Poetry, Storgy Magazine and elsewhere. You can find him on Twitter @RyanMGNorman. 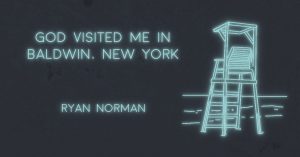 Read Next: THE PENCIL TEST by Grace Loh Prasad