IF WE MISS THIS ONE by Abbie Barker

The morning sun highlights imperfections—the cigarette burn at the edge of my seat, the dust on the dash, the dried blood hugging the edges of Grant’s thumbnail. He’s disheveled, unshaven, his black hair kinked from a restless sleep. I want to slide my hand over his cowlick and smooth it down. I want to talk about last night.

“Is there a later meeting if we miss this one?” I say.

Multi-family homes flash by in tones of gray, in varying states of disrepair. We pass a park with an overgrown baseball diamond and a playground where no children are playing. A woman in a faded purple sweatshirt sits slumped on a bench, her head rocking side to side. What’s it like to wake up wishing you could disappear? And once there, can you ever fully return?

“We’re close,” Grant says. He grazes my thigh with his knuckles. “I remember this pink house.” The three-story building is the color of Pepto Bismol.

Grant parts his lips, but no sound comes out.

“Last night. Should I have stayed at Sadie’s?”

“I hadn’t thought about it.”

As Sadie’s party thinned, I left him on the arm of a teal couch, sipping a Miller Lite. “It’s pretty much water,” he said.

“I didn’t say anything.”

He took another sip. “But you were thinking it.”

I don’t know what I was thinking. I was tired and wanted to leave. I’ve always been able to drink or not drink. What’s one Miller Lite on a couch?

“This is it,” he says, pointing to the glass door of a single-story brick building. There’s an undersized bronze cross stuck to the peak of the roof. We’ve arrived at a church, but it can’t be the one pinned on my phone. “I think there’s parking around back.”

Grant shrugs. “Once or twice.”

I wonder if this is how it will always be, the two of us searching for separate things and not knowing it.

In the parking lot, a man helps a girl down from the cab of a black truck. She wears a pink dress made of tulle and satin—the kind normally reserved for Easter Sundays. He grabs her hand and they hurry to the back entrance, the heels of her shiny shoes clicking on the pavement.

We trail the pair inside and down a carpeted hallway that smells of stewed tomatoes. Grant directs me through double metal doors propped open by two artificial palm plants. Music plays, heavy on the synthesizer.

The room reminds me of my elementary school’s cafetorium: cement walls painted a pale high-gloss, rectangular panels of fluorescent lights—misshapen gym with retractable basketball hoops. Magenta streamers hang from the orange rims, twisted and taped in uneven arcs. There are folding tables spanning one sideline, topped with an array of mayonnaise-based side salads and aluminum pans of baked ziti. I count ten people in the room, including the man and the girl from the truck.

Grant’s hands are in his pockets, his eyes directed at the phlegm-colored linoleum.

“We’re looking for an AA meeting?” I say.

“I’ve rented the room for my daughter’s birthday.”

Grant combs his fingers through his hair. This makes it stick out more. He says a few words that shouldn’t be said in a church.

The man’s eyes flicker with understanding. “In twenty minutes, this place will be overrun with kids, but we have plenty of food.”

“We should probably go.” I say.

“My brother is in the program,” the man says. He wipes his forehead with the back of his hand.

I expect Grant to craft an excuse, to drag us out of this child’s party we have no business crashing. Instead, he kneels, so he’s eye-level with the tulle-wrapped girl. “How old are you turning? Seventeen?”

The girl squints and holds up six fingers.

She lets out a musical giggle, revealing her missing front teeth, and skips to a pyramid of presents. Is it terrible that I’m craving a giant glass of Chardonnay? That all I want is to disappear?

The man pats Grant on the back. “I have to grab a few things from the truck.”

They walk through the open doors, deserting me in this drafty, multipurpose room with only my phone to swipe. With a few quick taps, I could reactivate my Match account and summon an Uber to whisk me away. Tomorrow there will be another meeting at another church on some other side of town, but missing this one feels too much like standing still.

Abbie Barker earned a degree in fiction from the Mountainview MFA and an MA in Literature from Fordham University. She teaches college English courses and lives with her husband and two kids in New Hampshire. Almost every morning, she wakes up early and writes. 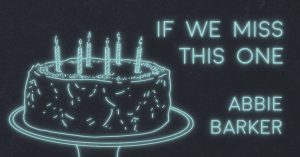