I saw Liquid Sky in high school, and although much of it was mostly just weird to me because of how young and clueless I was, the amazing blacklight monologue scene and its “cunt that kills” focus (and its 80s underground punk aesthetic in general) seemed transgressive to me in ways that were thrilling and subtle. Also, the first person I fell really, really in love with was older than me and loved Prince. Because of this person, Purple Rain was the sexiest thing I’d ever seen, and to teenaged me there was something especially intriguing and powerful and mysterious in Prince’s approach to sex and sexuality, like it lived in some dark and sacred erotic realm.

Bertolucci’s Stealing Beauty got in deep, though I was pretty young when it came out and I was definitely younger than Liv Tyler’s protagonist. I think I was stunned to see a young woman on film who seemed complex and smart, quiet and searching. Up until then, I believe I had never, ever seen a girl or a woman on screen who might have a rich inner life.

I don’t. I generally don’t use any writing prompts. I write when I can, or when I need to, but I can’t make writing happen when it’s not happening (if that makes sense), and I also can’t treat writing as a job. I don’t clock in or log word counts. I’ve absolutely been inspired by film, though! 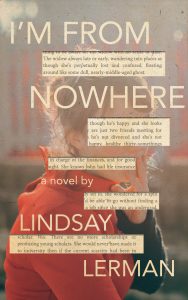 I think every place is a cinematic place in the right hands, but I spent many of my formative years wandering around the Sonoran desert and the pine forests in the high desert, so to me there is almost nowhere as cinematic. I think it’s the stark quality of life there — how everything that’s survived is almost exceptionally tough and wily. When I was writing I’m From Nowhere, I was lucky enough to live in the desert for a few years again, and since the book is set there, I found myself constructing the setting in a more cinematic way than I had planned to. The openness and the spaciousness and emptiness of the landscape made their way into even the structure of the story.

The past few years, I’ve rewatched a handful of films with some regularity. Peter Greenaway’s The Cook, The Thief, His Wife and Her Lover, Jane Campion’s Bright Star, Alejandro Jodorowsky’s Endless Poetry, Milos Forman’s Amadeus, Barry Jenkins’s Moonlight, and Claire Denis’s High Life. I’ve rewatched each of these for different reasons, but I’ve done so because it’s felt necessary to study them.

I catch myself saying “Fuck it dude, let’s go bowling” a lot. I’ve probably watched The Big Lebowski more than any other movie. I used to put it on in the background when I’d come home late, though to be honest, I really can’t remember why that movie and not some other.

So many scenes. The slow motion shots of Maggie Cheung’s arms and shoulders and neck in Wong Kar-wai’s In the Mood for Love; Béatrice Dalle smearing herself with blood in Claire Denis’s Trouble Every Day; Adele Haenel crying in the final scene of Céline Sciamma’s Portrait of a Lady on Fire; little Mai climbing on top of Totoro and taming him in Miyazaki’s My Neighbor Totoro; the scenes in Liz Garbus’s What Happened, Miss Simone when Simone turns her electric and gloriously intense stare on her audience, interrogating everyone with her presence. It’s intensity and tenderness that stay with me longest, I think.

The answer to this has changed over the years, but since the birth of my daughter, I really can’t watch anything that features kids in peril. And it’s not just because I think “oh no, what if that were my child?” — it’s because when I hear babies or young children cry, I feel alarms going off inside me and I feel a strong physical compulsion to comfort and hold and soothe. In general I’m fascinated by how caring intensely for other vulnerable beings rewires entire dimensions of us — it’s definitely not just parenthood per se that does this.

I am currently working on a screenplay. I’m adapting a short story I wrote, and it’s a really fun and intimidating challenge. I don’t know what will come of it yet, but I’m enjoying the entire process. (So far, ha.)

Lindsay Lerman is the author of I'm From Nowhere and What Are You (out in May of 2022 from CLASH Books). Her work has been published in The Los Angeles Review of Books, Entropy, New York Tyrant, and elsewhere. She is co-editor of Black Telephone Magazine.

Read Next: IRA RAT on film with Rebecca Gransden