He always walked me to my car when I left his house after sex, so stealing his albums was tricky. Not stealing. Borrowing. I started in month two, initially one album at a time, always only the record itself. He’d have to excuse himself to the restroom five or six times an evening, and I’d barefoot across his new carpet to just outside his bedroom, where the shelves began. I would slip an album out of the cover and into my messenger bag, take them home until our next engagement—he usually asked me back within a week—and after sex, put it back in its cover, fetch a fresh one. By month three I was exchanging ten at a time, and by month six, eighteen, the most I could carry in my bag. He never mentioned any missing, and he certainly hadn’t noticed the condition I returned them in. He said he’d not played music since the summer, but I was scared that he didn’t want me around for the music. I always made the short drive home in silence.

I missed him, in the in-between. Sometimes there were phone calls, about our day, about our faraway families. He did most of the talking while I painted on his records, repeating dots, lines, and swirls, starting around the center label and fanning out, playing the record backwards, pulling fine-tipped brushes over the surface of the grooved vinyl, until side A was nothing but a kaleidoscope of color. I bought a kid’s turntable and let the B-sides play wavily, lifted by the uneven, dried paint beneath, while I slept.

Vallie Lynn Watson lives in Wilmington, NC and teaches at UNCW. Her Pushcart-nominated fiction appears in journals such as PANK, decomP, and Gargoyle, and her novel, A River So Long, was published by Luminis Books in 2012. 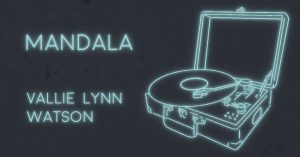 Read Next: THE PUDDLE BOYS AT NIGHT by Hadiyyah Kuma