Everything crashed into its true form following the blackout in New Orleans when Nora missed her flight and we drove to Little Rock, buzzing as trashy manic fairies. The Ozarks flopped and rolled, redefining themselves every few miles. Nora had proposed to me after pissing on the fence of an electrical transfer station somewhere outside of Austin where the grass grew through the chain link. I laughed at her, and she said, “I’m fucking serious, mate.”

“You wouldn’t want to marry me, Nora.”

“Fuck man, I love America. We could get dual citizenship.”

“It wouldn’t be worth it. I’m a difficult person.”

We forgot about it driving all the way to the bayou after picking up three Adderall from a Phish fan off 6th street. We made it to Lake Charles, but I couldn’t keep my eyes open. When I laid down, I couldn’t sleep. The next morning, I-10 was closed, and we didn’t get to New Orleans until dark. It smelled wet, and Nora’s eyes swallowed everything around her.

In those years, when we were bumping up against each other, it never registered how the interactions were shaping things. I was pushed up against myself and wanted to torment everyone around me. Torment, perhaps, is not the right word, but shape, engineer—that’s more accurate. I just wanted to take up emotional space. There was nothing intimate between us, because I had laundered all my affections for someone who viewed me as a bridge to carry them over those chasms between bouts of Real Love. In those moments they were afraid of falling, of being consumed by loneliness.

We checked into a hotel in Baton Rouge and caught a cab to the French quarter.

The cabbie said, “There’s been a lot of robberies lately. Plenty of cab drivers getting their cashboxes stolen. That’s why I carry this…” He pulled out a .50 caliber pistol from the center console.

From some angles the firearm was a shadowy, invisible thing, and from others it glistened with a mechanical beauty under the spectrum of neon lights piercing the window tint as we drove down Canal street. Stepping out of the cab there were two mingling bodies engaged in an acrobatic performance. They seemed to be merging, appendages growing from one another, legs and arms like fingers woven together.

By most measures, it was a bad trip. Everything had gone wrong. But I finally came to recognize Nora as she was—a movement I could not control, floating into my life in Prague where she had a fuck you tone toward everyone but me, and I never understood why. Nora became a perceptible junction of turmoil amid an expanse of purposelessness. Then the big blur came, and I woke up to an alarm clock.

“We need to get you to the airport.”

“Just a bit more sleep then.”

We woke up two hours after Nora’s flight took off. The first leg of her trip back to London. She called the airline. She could get home if we made it to Little Rock that afternoon. It was a tedious drive through the swamps, and the humidity hurt my head. We listened to Christian talk radio explain why transmogrification was not weird. The roads remained clear, and we made it in six hours.

As she got out of the car, she said, “The offer will always be on the table. I will leave my future husbands for you. So, just let me know.”

On the drive home, I was alone and I-40 was long. The Ozarks gave way to the plains—a yellow, dry surface endlessly inhaling the landscape. I thought of Nora on her flight, pestering some old man sitting next to her, coaxing him into three whiskey shots. I haven’t seen Nora since that afternoon, but when I think of her, she appears to me as countless swirling pieces. The car was quiet then and I heard only the humming of the asphalt and the air as I breathed in and out through my nose. On the edge of the west, there were clouds.

Mason Parker is a writer currently residing in Livingston, MT. He is the former poetry editor of Camas magazine. He holds an MS in Environmental Studies from the University of Montana. His work has been featured in Zhoupheus, Kreaxxxion, and Gods and Radical, among others. Twitter handle: @masonparkerMT. 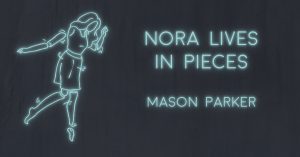 Read Next: AT THE ANIMAL LEVEL by L Mari Harris