ONE DRUNKEN M. LEVAR IN RELATION TO SMALL GROUP by Scott Malone

To ease elaborations, an assumption will be made for the reader. That, from sober perspectives, stupor-induced antics most commonly associated with alcoholics are the chaotic, frenzied movements of temporarily broken brains; they contain zero scientific insights. This case intends to show Academia why the understanding is incorrect. And that, under objective lenses of scientific method and reason, significant behavioral patterns emerge in those chronically inebriated.

Like moths to light, Drunks are attracted to groups of people. More so, if the group is standing. A strange phenomenon—especially considering a Drunk’s near-constant lack of balance—that’s generated a sort of mythos-cult following in underground psychology. However, regardless of notoriety, no peer-reviewed articles exist concerning correlations between a) size of group and/or b) subject’s inebriation level with c) likelihood of unsolicited intrusion.

Considered the local drunk by the local drunks, Mitch (male, 49, Drunk) was known by Pub’s bartenders as the regular whom under no circumstance should be served liquor, lest ye wanted a gremlin climbing the tar-stained walls, wielding darts, threatening whichever unlucky bastard nearest the jukebox with acupuncture if they dared not play “Behind Blue Eyes” again.

After stumbling half-zipped from the men’s room, Mitch shuffled toward Trudin’s booth and managed landing a heavy hand on Amethyst’s shoulder for balance before anyone realized what was unfolding.

Labored breathing, its flammable scent, increased agitation flickering behind sunken eyes—all clear evidence that, somewhere throughout the night, Amethyst had made the crucial mistake of serving Mitch the Evil Spirits.

“What?” Trudin asked the Drunk.

Mitch gave a cross-eyed smoking gesture for clarification and Amethyst shook his hand off her shoulder, tipping the belligerent forward, palm-to-table, where he vented halitosis fumes at Trudin with closer proximity.

“A CIGARETTE,” the Drunk elaborated.

Trudin faced Amethyst, avoiding the brunt of vile breath, and said, “Just the tab, Amber-thyst,” before directing full attention toward the GIDI.

“What about a cigarette?” Baco chimed in.

It’s believed Mitch planned on saying, “DO YOU HAVE ONE?” But this is unconfirmed, because the question never aired. His brain was instead forced to make an emergency interruption, updating the body on the severity of its equilibrium crisis. Firing last-ditch messages at the legs, the brain alerted both to spread out: WARNING, GAIN WIDER STANCE IMMEDIATELY.

Unfortunately, brains are also quite susceptible liquor, sadly, and left leg information was accidentally sent to the right. The result: a catastrophic crossing of extremities.

Mitch—legs buckling inward like a full-bladdered schoolboy—was spun a sharp 180° and sent staggering away from the booth, collecting speed while the brain calculated adjustments needed to offset its acute angle with the floor. Feet pigeon-toed, flopping onto locked knees, desperate to stay ahead the leaning tower of drunken mass. Acceleration continued along this trajectory until critical velocity was reached. Then, breaking into a spastic run before feet lost all contact with floor, Mitch was sent free-falling toward the bar, headfirst.

Lacking a proper variable for drunken luck, it’s unknown mathematically how Mitch’s skull missed the bar—forehead grazing the corner’s edge close enough to lift a tuft of thinning hair. And thus, thanks only to probability, damage sustained from the fall was mitigated to a 1/4” gash on Mitch’s chin where he’d caught a barstool’s polished seat and added four wooden legs to his already horizontal two.

Impact with Pub’s floor culminates the first recorded GIDI, concludes “One Drunken M. Levar in Relation to Small Group” on a successful note.

Acknowledgements: There’s no denying the burden placed on those unfortunate enough to have crossed Mitch’s path that night, but it’s Academia that’s truly indebted.

So, here’s to you, Mr. Levar, for all that was sacrificed as tribute to knowledge.

And, in summary, one final commendation is required for the way Mr. Levar concluded the GIDI. Because Mitch didn’t simply prove his case, he rested it with style and grace seldom seen by Science: disproving long-held standings that a Drunk’s actions possess no inherent value while simultaneously paying homage to History’s most iconic science experiment with his very own rendition of Galileo’s “Falling Objects” test.

Scott Malone lives in Richmond, Virginia. He can be found on his very exclusive, semi-living twitter account: @scottmalone0. 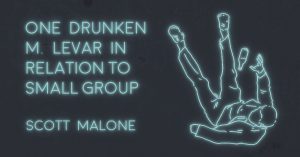 Read Next: THIS IS WHAT I WANT by Tina Wayland