Emo Phillips stands on a train. He thinks about all the fucked-up people he knows and wonders if people think he’s as fucked-up as he thinks other people are. The train conductor/engineer/driver person clicks on the intercom and thanks everyone for riding the train. Emo Phillips feels like he has never been thanked for riding public transportation.

“What,” says Dan Brown. Dan Brown is looking at an advertisement for furniture. The train conductor/engineer/driver person clicks on the intercom and apologizes for the slow pace of the train. Emo Phillips takes off his mittens. The advertisements for furniture are very sexually explicit–in one advertisement, there is a picture of two men having passionate sex on top of a dresser–and Dan Brown feels incredibly unloved. He doesn’t want to be on the train anymore.

“Like, am I weird, I guess,” Emo Phillips says. “Like, is there stuff weird about me. To people”

The train conductor/engineer/driver person clicks on the intercom and suggests that more people should get off at the next stop so the train can go faster, because of the weight of the people. Almost everyone on the train checks to see what the next stop is.

Emo Philips feels worried. He remembers that the furniture store from the advertisement is at the next stop.

don brown (no caps) clarifies that he doesn’t know what Emo is asking. They are lovers, and they are on the train, and The train conductor/engineer/driver person clicks on the intercom (copy pasting this now) and begins to cry into the microphone thing, pleading for everyone to leave.

Zac Smith  is the author of 50 Barn Poems (CLASH Books, 2019). His stories have appeared in Hobart, Maudlin House, X-R-A-Y, Philosophical Idiot, etc., all over the place. He lives in Boston and his tweeto is @ZacTheLinguist. 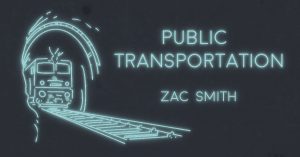 Read Next: SOMETHING WRONG WITH MY LIFE by Meeah Williams

x-r-a-y magazine
EVERYTHING ELSE IS JUST EXPOSITION by Gauraa Shekhar
NO, YEAH. by Erin Gallagher