They’re coming at me all the time now. I want this, I want that. Uppity bunch. In my day, students didn’t act like this.

This lot spends the morning taking selfies. Spends the afternoon posting them places you never even heard of. All that staring into their own eyes—where’s it going to get them?

So, anyway, one of them says I wasn’t using gloves. Okay, I say, talk to management. I say talk to management about why I am the only server here when there’s all of you and you all want your special ingredients and not what it says on the board. The board says hamburger. You know what that is? It’s a hamburger. Meat, bun, tomato, lettuce, ketchup. This is a college cafeteria. You want something fancy? Go downtown.

But that’s how it is now. Before lunch hour I get one five minute break, so I walk the halls. Stretch my legs. You’d think I’d be trying to sit, but no, I look in through the corridor windows at all those kids and some of them are studying and most of them not. Heads down, I wanna yell. One girl has her back to me and I see she’s got her computer open, so the teacher can’t see her screen. She’s got the camera on and she’s all pouty like she’s putting on lipstick and she’s taking a photo. Her own photo. Just like that! In class! So I lean in, press myself up against the glass and glare at her. I’m there in the corner of her computer screen as she goes to take the next shot. She jumps and spins round to look at me. I don’t look away.

The teacher catches me and I wave. He sometimes comes and gets the vegetarian pizza, two slices, no eye contact. He waves back and keeps talking, pays no heed to the girl with the camera.

There’s something on the class whiteboard about “re-imagining the self in the tech age.” I don’t even know what that means. Seems to me no one here needs too much help with it, what with all their camera filters.

I don’t care, I’m not taking that class anyway. I turn and keep walking the corridor. Today, I’ve got a purpose. Paperwork to hand in.

I’m older and older has to be practical. No time left to take too many wrong turns down streets you just don’t know. The Instagrammers don’t get that. They got born into a world ready to fawn over them like new babies wrapped snug in a pram. Not me. I’m forty-five and I don’t look a day younger and when I walk down a corridor, no one clocks me.

I wear the cafeteria uniform: black shirt, short sleeves, black trousers, hat off. People just assume, corner of their eye, that I’m down this way to collect rogue plates and cups. Like I’m here to put the rubbish in the bin.

At Registration the woman behind the counter is my age. She looks at me. I might’ve wished she hadn’t though, as all the judgement in the world leaps from her side of the counter to mine. “Accounting and Payroll Basics,” she says as she takes my paperwork.

There’s a pecking order here: it’s office woman vs cafeteria lady. Office woman thinks she’s got it. I tell her, “I just want to rise up from burgers.” She keeps typing. So I go on. “I want to be in an office. I don’t want to be near nineteen-year-olds and their hunger pains five days out of every seven, you know?”

I nod again. “Sure. I can read. Told you that already.”

She does some processing, looks serious for a moment, then finally really looks at me.

“You’ve been accepted,” she says. “The course starts first week of September.”

I say the quietest thanks and I walk away.

When my break’s over, I’m back at the counter. There are no gloves anywhere. I pick up a meat patty with my bare hands. Cold hard lump of mince. I doubt it’s even meat. I throw it on the grill and rub my hands on the disinfectant wipes. I grab a spoon and lump some lettuce and tomato onto a bun. One of the young ones catches me, nods at my hands. I wave the spoon at her.

“Not touching anything,” I tell her. “It’s all fine and clean.”

I want to tell her that patty isn’t meat, so nothing to worry about, but that’s just going to get me into trouble.

“You have to use gloves,” she says.

She’s right and I know it, but I haven’t touched anything she’s going to eat with my fake meat hands. It’s right now I wish she was on her phone. Pouting, filtering. I can’t fix this place I want to tell her, looking round for support. There’s no-one else serving, no manager to fetch the new box of gloves from the storeroom.

What else am I supposed to call her? She’s no ma’am.

She looks upset but still waits for her burger while the patty grills. I rinse my hands and I wipe down the boards with a cloth. I get a clean fork and spear the meat and slam it down onto her burger. She’s glaring at it. Talk to the management, I want to tell her. They’re making the money here, they’re taking your seven bucks and they’re paying only one person to field you and all your buddies at lunch time. Tell me where that money’s going. Not my pocket, that’s for sure.

They say your brain keeps growing till you’re twenty-three. You see it in these kids. They’re shapeshifters: ready to change their hair or their politics or their style right here in this cafeteria, most days of the week. I feel a little jealous.

I don’t know what this girl in front of me is going through, but when the manager finally comes, she tells him, “That lady, the one behind the counter, she didn’t use gloves.” Conspiratorial, whispery, righteous.

I stare at that girl as she tattles and I don’t look away – I will tell it how it is because I know the manager won’t even care and is just waiting for that young girl to get her rant out of the way before he moves on and so does she.

And so it is. The manager hands me his own gloves and goes back to wherever it is he sits. The girl finds herself a table and I wonder then, if that girl is going to be in my class. If she’ll act stunned to see me there, or friendly. She picks up her phone, like the universe knew she would, like it was some kind of ancient human action, and she snaps herself and her fractious little burger.

She doesn’t turn to look at me so she doesn’t notice that I’ve started to laugh. I laugh as I think about my gloves and about how it’ll feel taking them off in that first class, in front of her, and dropping them in the bin by the door. I have a little chuckle to myself when I think about that class too, and how, when it comes time to work, I will, and how when it comes time to listen, I will. I don’t plan on failing. Done that already.

I get all springy in my step and smiley as I realize that girl won’t even see me when I pass her by.

EC Sorenson is a media producer and writer, recently relocated from Canada to Australia. She has worked in production on films such as Moulin Rouge and the Matrix. Her writing has appeared in several anthologies, most recently at MonkeyBicycle and Tiny Essays. She tweets @ecwsorenson 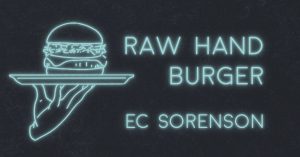 Read Next: GIVING SPEECHES IN YOUR UNDERWEAR by Emily Painton