SCHOOL OF HARD KNOX: A Conversation with DuVay Knox by Charlene Elsby 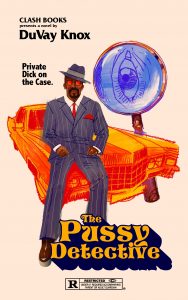 I received an advance copy of The Pussy Detective from Clash Books. Within the pages upon pages of unabashed pussy appreciation, I found a portrait of a man devoted to mitigating the damage done to people by other people (and the desperation of those who would turn to such a stranger, when it seems all hope is lost.)

This interview was conducted as an email exchange in December 2021. and The Pussy Detective. Now it might be reductive to say your topics are sex and death, but the themes are definitely there. What I’m wondering about is the spiritual aspect, as it seems that within your work, sex and death are both conduits to a kind of beyond. Is there another realm behind our material world, and how and when can we access that?

DuVay Knox: Deep Q. Butt yeah DEATH is sho nuff another REALM. And when it cums to SEX the FRENCH say, in particular, dat The ORGASM is LE PETIT MORT aka The LITTLE DEATH. Having been a SEX ESCORT in Europe, among otha countries, Sex continues to play a part in mah Books. Especially the TRAUMA dat often accompanies COPULATION as part of a RELATIONSHIP dat SOURS—Or as a result of ABUSE. Meanwhile, much of mah life was like growing up in a WAR ZONE where I lost many of mah FRIENDS & RELATIVES To DEATH. And they were always wondering WHY? Why were these peeple TAKEN frum them? So much of mah WRITING is a NOVELISTIC attempt to address this issue.

CE: Deep answer. That was actually something I was planning to ask you about—that when I read The Pussy Detective, I was surprised to find the voice was so empathetic. I don’t think it would spoil the book to talk about the reason the narrator gives for why women seek out the skills of the narrator. (Their pussy lost its magic on account of some bad man). It seems to me like you’ve had some really influential women in your life. Now that I’m thinking about it, I don’t recall a single other male character with whom your character carries on a conversation, or who factors into the story significantly—not counting that fuck Greasy, of course. It’s almost like you’ve got a source on women’s psychology on the inside. Care to comment?

DK: Hmmmm. Had a good relationship wit mah Mama. Plus, I was married for 25-plus years (not all good….butt STILL we hung in there and did what we had to do). Then too: I slung dick as an escort for a number of years round Europe as a young man in the AIR FORCE. So I have spent many nites jes LISTENING to women. So much of the PUSSY DETECTIVE was based on THOSE S/experiences: what they talked about in regards to men folk. Imma good listener (so I have been tole).

CE: I have some quotations underlined, just because they remind me of various things I’ve read in philosophy. There’s this mention of the pineal gland, which Descartes said was the source of thoughts, and which you identify as connected to the clitoris (which is the gateway to a woman’s subconsciousness). Then there’s a “SACRED HYSTERIA no womayne shood ever Sexperience–UNLESS she is giving dat thang up to the RITE muthafucka.” And the idea that “KARMA Is Also a SEXUALLY TRANSMITTED DISEASE.” You talk about majick, demons and gods. It looks to me like you’ve got a consistent and coherent spirituality that informs the whole theory of the book–and the ritual that Reverend Daddy Hoodoo conducts on Abysinnia. Are these beliefs to live by, or just part of a fiction?

DK: Years ago, back in the late 70s, when I started studying the CLITORIS (cuz I wanted 2 B thoro when it came to fucking) I came across the info bout the CLIT being konnected to the PINEAL GLAND it cumpletely changed how I viewed SEX and WOMMIN. And especially DESCARTES along wit NIETZCHE/OSHO & PASCAL BEVERY RANDOLPH informed mah SEXUAL PHILOSOPHY. For example, Nietzsche stressed the importance of FRIENDSHIP over LOVE. Dat made an impression. The NAZIS really took his shit outta context. And OSHO was the guru of FREE LOVE “butt” always noted dat it had responsibilities. That led one day to mee writing the quote: KARMA KAN BE A SEXUALLY TRANSMITTED DISEASE dat I explain in da book.

Add all this 2 da fack dat I grew up in da Life of HOODOO (New Orleans/Mississippi) and SEX MAJICK/DEMONS & GODS of the REALMS where destined 2 B a part of mah life. So yes I LIVE BY THIS (and THESE) thangs. They R not jes lip service. I view SEX as a GATEWAY to HIGHER REALMS via RITUAL (wich is how I was taught to view it). So yes: I draw frum these aspecks 2 pull them into mah FICTION.

CE: I did a quick search through the digital copy of The Pussy Detective and found that you use the word “pussy” 113 times, but you also use “puss eye” 17 times. I think I understand these two concepts, but for those who haven’t read the book yet, could you explain what the difference is?

DK: PUSS EYE was jes mah DADDY’S funny name to take da Sting outta dat werd. Southern slang if u will. So dat was kinda an honorarium to him.

CE: So you’ve been around a while—on the planet, I mean. But you’ve just started publishing. I want to know how that happened. There’s a hint in your Pussy Detective dedication that there are two women who “never let me forget that I could write something folks would wanna read if I really put my mind to it.” In your previous life, were you not writing (or not writing something folks would want to read)?

DK: Yeah-i been round da block a lil skeet taste. I wasn’t publishing tho cuz I was bizzy writing as a freelance journalist for many of the Top Hiphop-Rap publications in the country/copywriting for ad agencies and doing standup comedy (werking wit a lotta Names in dat world including DAVE CHAPPELLE, CHRIS ROCK, BILL HICKS, NORM MACDONALD, DANA CARVEY and many others …. even almost had a job writing jokes for the CONAN O’BRIEN show). Butt I left standup comedy cuz dat particular hollywood industry is such a beast & slimy.

I Slowly came to da thought of a writing a book after countless peeps telling me I should do it. A lotta dat encouragement came frum SLAM POETRY contests I useta compete in. AND da 2 women dat I hint at. Im kinda a Polygamist and have 2 Ladies in mah life hoo have been krucial and kritikal to mah success. Their motivation is what ultimately pushed me to git da books outta me and onto da page. In fack: MADAME X is based on one of them.

CE: How did you become acquainted with Marjorie Steele over at Creative Onion (who published Soul Collector) and then with Clash Books?

DK: Meanwile-I met MARJORIE STEELE when I was writing on MEDIUM round 2016-17. I was using da platform to write JOKES and SATIRE as well as SHORT STORIES and she took a liking to mah flow. She was one of mah most devoted followers. Later she tole me she was working on heading up her own PUBLISHING COMPANY and wanted to git mah shit out to the world. Tole her I was IN. She kept her werd. And on top of dat she is just damn good peeple. And GOOD PEEPLE in this Industry (let alone the werld) are hard 2 find. I will always be thankful 2 her for giving me a chance. Because where others were scared of mah RAWNESS she allowed me 2 B Unfiltered (which is the basis of mah Standup: rude/raw/offensive). She has never been afraid of mah FOUL MOUTH ways (profanity is mah 2nd Language).

CE: In the Soul Collector, the narrator collects souls, while in The Pussy Detective, the narrator finds lost pussies. I can picture both your books being episodic, i.e., they’re both open to being serialized. Are you working on a sequel? (If so, can you give us any hints?)

DK: True dat. I wrote dem EPISODICALLY. Especially da SOUL COLLECTOR. I like mah TV/Movies da same way. I tend 2 think VISUALLY in da vein of COMICBOOKS when I write. I like dat old skool CLIFFHANGERS stile of writing/serialized shit (ala DICKENS). So yeah–im werking on SEQUELS for both books. Maybe simply The SOUL COLLECTOR #2 and/or the PUSSY DETECTIVE RIDES AGAIN (since he was always in his car going 2 rescue PUSS EYE).

CE: Finally, maybe you could tell me a little bit about Black Pulp Fiction Publishing House. What’s your intention with that venture? What can we expect in the near future?

Im also concentrating on re-introducing the koncept of short novels (novelettes) as I think peeps are tired of LONG ass novels. I know i hate books that mo than 200 pages (maybe dats mah ADHD). To dat end books Im writing/publishing will fall into the old skool POCKETBOOK size of 4×6 or 4×7 and not over 150 pages. Having been in advertising I think psychologically peeps are subjeck to buying a book they kan simply putt in their pocket/purse. It gives dem the feeling dat writing wont be a chore. The age of the DOORSTOPPER book is over. Meanwile: JAMES PATTERON is alretty on this trend wit his BOOKSHOTS series. A lotta of those books are 100 pages or Less. And Im heah 4 it.

Charlene Elsby, Ph.D. is an independent scholar and the author of Hexis and Psychros, Affect, Agyny, Musos and Menis (forthcoming at Merigold Independent and Clash Books).

Read Next: ENTITLED TO FEEL SOMETHING DARK: AN INTERVIEW WITH SHY WATSON by Brad Casey