My name is Phineas and if I can get the pose right, a photograph of me will appear in the 1979-80 Ridgid Tools Two-Year wall calendar.

In a two-piece and six-inch heels, I am holding a No. 930 1/2-inch D-Handle Reversing Drill like it’s a semi-automatic weapon.

We were fixing up a place that needed fixing up. We were going to live there. Her parents were helping, although it was more like I was helping and they were fixing.

“Can you hand me that level?” her dad said.

It’s the voice on the radio, the voice from the moon. The one that sings about someday and orders the Tour of Italy at Olive Garden. The one you listen for when you’re cold. The one that holds your hand.

I turned to watch her walking down the aisle.

I saw her mother, dressed in fuchsia, freaking a little and fumbling with plastic aisle markers that were melting in the 95-degree heat.

I saw her grandmother, who also was dressed in fuchsia or maybe off-fuchsia.

I saw her father. He was dressed in black. Her father was a practical man, a provider man, a good man. In many ways, a man I was nothing like.

There was a tap on my shoulder and turned to face the tap. Red-faced in the sun, pregnant out to here and presumably miserable, the judge was smiling. Beaming.

“Hot enough for you?” she asked.

I’d written the lyrics for “I Just Want To Be Your Everything,” a big hit for Andy Gibb back in the day, and I’d been invited to serve on a panel at a songwriters convention in Kennebunkport, Maine.

During the Q&A, a young girl asked: “What does ‘Everything’ mean—or, more to the point, what did you intend for it to mean when you wrote this song?”

I waxed on the nature of that which is and the vastness of the all, citing instances in popular music within which this is-ness manifested in one individual seeing the is and the all in another individual—witness “You Are Everything (and Everything Is You),” the fabulous Stylistics record. There’s “Everything Is Archie,” perhaps the finest example of a paean to pantheism the world’s heard. But for all-encompassing is-ness and the unbeatable all of it all, nothing tops Donny Hathaway’s “Everything Is Everything.”

The girl, who identified herself as a freelance correspondent for the Neil Armstrong Elementary School Post-Gazette, exhaled with what might have been a combination of impatience and contempt.

“I guess you don’t understand my question,” she said.

A little before dark and a little after the end of the beginning, we saw a toucan taking names on Lexington Avenue.

We held the children tight, but they wriggled out of the hold. A pink parchment sky opened, possibly to show itself to the various and sundry sporadic believers, which included Nathan Hale impersonators, anthem buskers and non-committal arena rockers.

“When are we going to visit the set of Total Request Live?” the children said.

That One Sade Song

My name is not Mud, but it is.

When I was 20, I wrote a song titled “My Name Is Mud.” It’s about a guy saying, “I know my name is Mud, and I know I’m something of a disgrace, and I’m probably dead to you, but I hope you’ll stay with me, metaphorically speaking, in the event the Mud thing isn’t actually a thing.”

Neither One of Us

We were listening and not listening to the northeast wind, which wondered if we’d considered talking things out.

We were listening and not listening to the Voice of America, which asked who do you think you’re fooling?

We were listening and not listening to Gladys Knight sing about two people who didn’t want to be the first to say it.

I was to be the last stand-up comedian ever to perform at the Fuller Brush Company annual meeting and golf outing.

“I was proud of you, once, you know,” my ex said, slurping Red Velvet Cupcake Blue Bunny ice cream out of a straw.

“I know you were, and if you knew how much I thought I loved you for it, you would…know it,” I said, leaping out of bed and into the living room, where the Fuller Brush men were waiting.

The Fuller Brush men asked me if I planned to work blue during my routine. I said I wasn’t sure what constituted blue these days.

“We don’t need any of that wistful, underlying sadness stuff. Nothing poignant, no pathos—no song sung blue every garden grows one,” they said. “Embrace the moment, yes, strike a pose, sure, but remember your audience. And no life insurance jokes. Hear what we’re saying?”

Pat Foran is a writer in Milwaukee, Wisconsin. His work has appeared in various journals, including Little Fiction, Bad Pony, Okay Donkey, WhiskeyPaper and Milk Candy Review. Find him on twitter @pdforan. 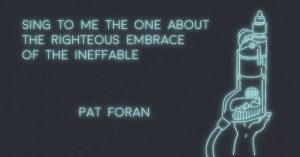