THE END by Zac Smith

The seasonal jobs came back to town aboard a gleaming, diesel caravan. We all stepped up to carry water and dirt and to do all the other things that would be asked. Brought our resumes, our lunch boxes, our good gloves. Someone was going to see us, buy our labor for a week or month—see something useful in the junk, like Giacomo did as a dropout teen, buying a rusted-out chainsaw to bond with mom and get it running again. And just like that ideation, we’d take off for somewhere else full of better promises. This we knew, believed, felt, etc.

Giacomo had his old hat, the lucky one he first fucked in. He used it to wave down men and women in their shiny white trucks. I spat in the dirt. Same difference, same result. Whatever happens is inevitable. Giacomo never believed in fate. We got picked up, taken to tryouts. Giacomo wanted to swear so bad when he saw all the if-onlys and why-nots pass us to hit the exit ramp last minute. We were heading further out than everyone else. What sun would beat us down then, way out there, we wondered.

They grouped us out, saw favorites quick. Barked like big dogs except we all knew what kinds of barks meant what and how and when and how much. He pushed the crates and I held the hoses. We both considered it best. I heard him try to angle in around the edges, get some networking in, as people liked to say, get some human decency out there in the good spring heat. Sweat in his eyes made him squint like a little bird, one of those no-feather ones, just skin and slime. I tried counting to ignore my present self and state—rocks, steps, crates, yards of hose and stacks of coil, counting everything and anything just to pass through the tautly pulled time we floated in. We heard buzzing off in the distance, something making sawdust, or something like it.

Giacomo huffed and chattered behind his crates. Hush up, waste your breath on better things, I thought. Push your crates to make the bosses feel the things your words can’t make them feel. They are in their own way illiterate like us, like mom, like everyone else who would care about any of this, but the language of cost and control is better to know than the language of push and carry. I imagined horses cutting down trees because of something Giacomo said years ago.

His hat lay twisted on his head, beguiling, wringing laughs when he passed the foremen and their kids. He didn’t see them chortle over the tall crates, though, or maybe just over his old stubborn spirit. He breathed in our stinking huffs of exertion and sighed out hope. I liked Giacomo and didn’t want to see him spoilt anew. We were small moons in orbit of something pretty which harbors life. We were not the show. I wanted to push him back, somehow put legs on the crates, watch him dance and distract himself to keep them lined up, dunk us into the irrigation trough, rise up laughing like a couple years ago when we thought it best to rinse off the sawdust.

We talked scrapes and cuts before sleeping in the grove under the stars out there by the end of the highway. We talked about distraction, old technology. I was bored and thus unclear, hoping to chisel out some new thing by vagueness, bring our thoughts into a new space, maybe knock him back down off his prideful course, back down to me, where I was. Giacomo was never as down as I even though he slept in the deepest hole on the worksite. Something about initiative, action, teamwork, sacrifice, leadership. I ate my bad food in silence while he buzzed on about these foreign words he found somewhere, something about coffee. I thought then and continue to think that work is work, is the same thing as last year, next year, the very beginning times, the very end times. I considered the stars pretty enough where we lay out in the gravel, but he had thoughts of strange rooms out in the grassy hills with windows as big as our tar-paper ceiling where one could somehow see even more stars, though I didn’t ask for detail.

We worked as hard as needed, but Giacomo caught heat stroke before catching any attention. His mom said to keep your head down and she said it literally, although Giacomo somehow thought he could improve the way deep channels wind through the earth. I don’t think they make a saw big enough for that.

I saw him lay in the shade while the owner’s son wandered through the stacks and stores trying to devise new things to array and bundle up and sell. It was bad timing, caught recovering in the dirt, hat over face. The boss boy ripped it off and tossed him out. Where to? We held our breaths and worries so no one would think us human. We pretended to be delicate machines in the industrious frontier instead, things just brought in to wring together pretty bundles or rip apart nature. Giacomo got canned, hat in hand, just like he was when we climbed aboard that promiseful truck. Canned is a euphemism for the gorier details of our rumpled-up contracts, as you might imagine.

I dug the ditch he lay in then, and I laid the soil thereafter. It was only natural that I not feel the need to test his boots, swap our hats, turn his pockets—I knew how they fit and what they held. This showed promise to someone, they mistook my sadness for integrity or some other obscure thing they considered good. They gave me a bundle of his things, including a book that seemed impossible to read. I flipped through it and saw things we had together, neatly lined up in little lines.

The company asked me if I had anyone or anything to keep me back in town instead of going elsewhere for more work and more money. I told them no, tamping the dirt with the company’s spade. I told them to take me away.

Zac Smith is the author of 50 Barn Poems (CLASH Books, 2019). His stories have appeared in Hobart, Maudlin House, X-R-A-Y, Philosophical Idiot, etc., all over the place. He lives in Boston and his tweeto is @ZacTheLinguist. 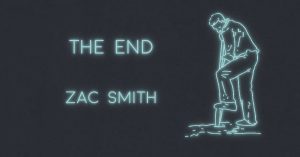 Read Next: UPHOLSTERY by Corey Farrenkopf