THE GATED COMMUNITY by Joseph Pfister

We received the brochure in the mail. It was printed on that thick paper, the fancy kind, with raised lettering. ESCAPE TO FLORIDA! it read. YOUR OWN PRIVATE PARADISE AWAITS! Everyone in our subdivision got one, but that didn’t matter. It was February, the ground brittle with snow. We were ready for a change.

Overnight, developers transformed miles of Florida swamp into a mecca for the recently retired. Walk out your back door onto replicas of Sawgrass, Augusta, Pebble Beach! Work up a sweat on our racquetball courts! Cool off with water aerobics! Jazzercise! Sure, the amenities sounded nice. For most of us, though, that wasn’t the real draw. The development was owned by a famous mogul, someone our age, who had made his millions while we were raising kids, debasing ourselves at nine-to-five jobs, and paying off the interest on our thirty-year mortgages.

We’re transplants, snowbirds from the Midwest. Wisconsin, Indiana, Ohio. Emigres from America’s heartland, headed south to avoid the worst of our arthritic knees, the patches of black ice lurking between our houses and cars. Our children are grown or mostly grown; they went to good schools, earned expensive liberal arts educations that taught them words like “adscititious,” and “calliope.” Now they live on the coasts and have families of their own, 401(k)s, juicers in their kitchens, and pay mind-boggling sums for rent. Our grandchildren play piano, win science-fair competitions, vacation in the Hamptons. They don’t come to visit us. They’re too busy.

The mogul appears only on weekends. He brings his moody wife, his spoiled children, his entourage of men with peppered gray hair, expensive suits, beady eyes. They join him at all the board meetings.

We like the mogul immediately. He’s full of bombast and unrefined charm. A minor celebrity. We like him because he’s outspoken. A straight-shooter who talks tough, who doesn’t kowtow to anyone. Despite rumors that he hasn’t paid some of his contractors and there are several finished houses still sitting empty, we remain south Florida’s most-desirable gated community. To help keep costs down, the mogul buses in illegals to clean the streets, landscape our lawns, water the golf course. He pays them half of what he pays his other workers, he tells us with near-euphoric glee. Sometimes even less.

There’s already a gate around our community—twelve feet tall, wrought-iron. Dour-faced guards check our IDs at the entrance and prowl the overwatered grounds at night, but the mogul insists we’re still not safe. We need a bigger gate. A better one. Built from only the finest in American-made steel.

Yes, of course! we say. Anything to keep us safe! But how will we pay for it? Our pensions, our monthly social security checks only stretch so far. We already can’t afford to fly to visit our grandchildren.

The illegals, of course, the mogul explains. They’ll pay for it.

Spring rolls in to summer. The air swelters. Every surface weeps moisture. The rain in Florida, we learn, is nothing like the rain in Lincoln or Sioux Falls. The swamp swells. Sinkholes appear like giant, angry mouths. They swallow golf balls, whole golf carts. We dream, sometimes, they will swallow us, our homes, our wives.

It is so hot, we can’t even golf. We stay in. We knit. We watch the news. One night, a guard catches two illegals—a mother, her child—trying to cross the golf course.

What should we do with them? we ask the mogul. It’s our golf course, after all. There are signs posted everywhere—No Trespassing!—and the gate! How could they have not seen the gate?

These are just the first, the mogul warns. We have to make an example of them—before they unionize!

And so the mother and child are separated, placed in cages on the back nine. They’re given blankets—we’re not monsters, after all—and calling cards that charge $7.99 a minute. With good behavior, they’ll be “eligible for reunification” in eight to twelve months, the mogul’s people tell us. The next night, security catches three more. The night after that, five. Then eight. We stuff them in with the mother, her child. We deny them toothbrushes. We purchase megaphones and shout that they will never see their loved ones again. We don’t have enough water to let them bathe and water the back nine, so we limit showers to once a week. The lines at our doctor’s offices and Walgreen’s are already too long, so we ignore their persistent coughs, their occasional fevers.

They watch us through the gaps in their cages, where they stand, crammed like cordwood, their enormous eyes black as gator holes. It’s impossible to enjoy iced tea on our fake stucco porches anymore, so we move our afternoon bridge games indoors. Our own children won’t return our calls. We imagine them, our sons, our daughters, talking about us in hushed tones at dinner parties. The five-dollar checks we send our grandchildren on their birthdays go uncashed.

After some of the more timid among us, those with less-hearty constitutions, begin to worry—they don’t want our community to develop a reputation, after all—the mogul reminds us that he didn’t get where he is by being nice. And, besides, if we don’t like it, we can leave.

But where would we go? We’ve been here so long, we can barely remember the lines, the contours of the world outside our gates. A world without walls, without the freezer-chill of doctor’s offices, and the sweet smell of rotting citrus. We departed our old lives so long ago, we’re not even sure we could survive in that vast, disorienting macrocosm beyond our borders, even if we had to.

So, yes, we tell the mogul. Yes. We’ll follow anywhere.

Joseph Pfister’s fiction has appeared in PANK, New World Writing, Juked, Gone Lawn, and decomP, among others. He is a graduate of the MFA Writing program at Sarah Lawrence College and currently teaches writing at Brooklyn Brainery. Visit him at josephspfister.com. 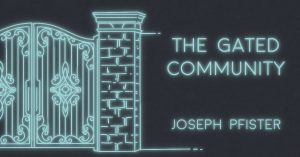