THE TODDLERS ARE PLAYING AIRPORT AGAIN by Tucker Leighty-Phillips

They’ve partitioned everything: the slide is the runway, the jungle gym is the terminal, covered in tiny travelers; anything with mulch is part of the operations area. Nobody flies. Nobody ever wants to be pilot. The toddlers love every aspect of the airport except for flight. Tickle always wants to be the rampie, loading freight onto planes with his sandbox bucket. Dasha is the lav agent, as she’s the best at keeping the plane’s bathrooms within regulation. Everyone wants to be Bill Boyer, Jr, CEO. They fight over his stock options until they shove one another and you have to step in and separate them, saying Lacy, you were Bill Boyer Jr. last time, why don’t we let Steve this time? One child reluctantly plays pilot and discusses weather conditions and itinerary changes with a dawdling crew chief, a snotty kid with both shoe strings loose-a-goose. This is most of their game, quiet discussions, loading and unloading bags into mouths of slides. This is the fourth time I’ve been routed through Tampa this week, pilot child groans while the other begins the aircraft’s push back, preparing for takeoff. They bicker over operating the tow motor. When you say, don’t you kids want to fly, just once, don’t you want to fly, they say that’s what everyone thinks on day one, you just come in and fly, no problem, like it’s a breeze, you just fly, but we’ve got an overnighter on a non-movement area and ATC is backed up to Glasgow and I haven’t had a single fruit snack today so forgive me if I’m a little on edge, Mr. Sky Cap, and you step back, remind yourself it’s just their game, babble with the other parents, and think of some great taxi propelling you through the sky, vaulting into the blue-and-white, traversing the mighty somewhere else.

Tucker Leighty-Phillips is a writer living in Tempe, Arizona. His website is TuckerLP.net. 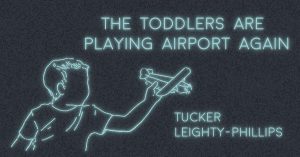 Read Next: GRIP by Claire Hopple