A REVIEW OF JOSHUA DALTON’S I HATE YOU, PLEASE READ ME by Selena Cotte 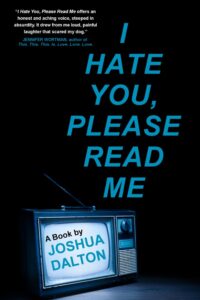 Joshua Dalton’s debut collection I Hate You, Please Read Me (House of Vlad Press, Feb 2021) can also be read as a novel in fragments: It uses tweets, direct messages, flash-length stories, and a much-anticipated closing screenplay to communicate a pitiful, media-saturated existence.

While never explicit, it seems clear that the stories and interactions all exist in dare-we-say anti-hero Marshall Crawford’s world in varying degrees of intimacy, to paint a character portrait of self-pity, self-awareness, and self-abuse. Even stories about other characters appear as representations of his own self-image, merely presented from an angle, using TV tropes and dripping with other symptoms of a media-poisoned lifetime. After all, this book is highly informed by internet culture, with its periodic collections of tweet-like fragments that simulate the very experience of consuming online content. Read a few articles, scroll through your Twitter feed, send a few messages, repeat.

The book’s fragments also work to simulate borderline personality disorder, a highly misunderstood condition marked by unstable relationships and the rapid cycling of extreme emotions. Dalton identifies himself as a “borderline writer” in his author’s bio, and Marshall refers to the disorder both directly and indirectly throughout the book. He experiences the higher senses of grandeur and extreme worthiness (in his lack of care for those around him, as well as his implied self-comparison to Batman) as well as the degrading and self-abasing lows that come from his unstable relationships and inability to create meaning from anything in his life. It is a circular problem, as his attitude informs his life, and the poor conditions that this creates informs his attitude. A difficult cycle to break.

Dalton treats his readers as Marshall treats those around him: We are simultaneously invited into Marshall’s existence and then pushed out just as quickly. Sometimes we are kept at arm’s length, with surreal shorts such as “Regression” and “The Apple Doesn’t Fall Far From the Trauma,” both appearing in succession early on in the book. Other times, we are dragged down into the mud of these emotions, asked to stand witness to Marshall’s most intimate moments, both including the small admissions that he knows what he has done wrong and the equally off-putting depiction of anal douching before a “date,” in full explicit detail. It should not surprise you by now that making himself vulnerable in the latter form seems easier for him than the former.

In “Regression,” we see immediately that our protagonist is not interested in painting an empathetic portrait of himself. He is visiting a therapist who is visibly ill, and not mildly; he blows his nose at one point to find blood in the tissue. Many would become alarmed at this sight, but the narrator of this story does not break from his self-absorption to ask about it.

“Yuck, I thought. But I pressed on,” is how he responds to this moment, continuing on a diatribe about how difficult and unpleasant communicating with others is for him.

“The Apple” reads more like a nightmare, as it’s even further disconnected from any kind of reality (either ours or Marshall’s), painting the world as an almost comically horrifying place of despair and hopelessness. Through his bleak and tragic depiction of child suicide, which only keeps occurring at younger and younger ages, followed by more and more sudden births to replace them, one can understand the futility and nihilism Marshall feels, ironically more intimately than when Marshall tells us himself.

But more realistic depictions of Marshall’s life are also mediated through indirect communication: In the opening story “Showrunner,” we are immediately introduced to the notion that he views his life as a film or television show, a motif that repeats throughout the book. His character Max Collins is a thinly veiled version of himself, and the longest story of the book is the final screenplay that shows him stalking an ex, stealing from his mother to pay for a male prostitute, and using his homosexuality as a deflection away from the more despicable act of transgression: the theft, which he would actually have to take responsibility for, unlike his queerness which could reasonably be chalked up to “I was born that way, Mom.”

But it’s not enough to depict these events alone. Dalton/Marshall, through his screenwriting direction, wants us to know that he is aware of the nuance here. He knows what is really wrong with the situation, he just can’t help himself. Or so he wants us to believe.

It’s this kind of emotional spiraling that can make borderline personality disorder so devastating to experience, either personally or in a loved one. Dalton replicates the experience with empathy and ultimately, a kind of frankness that will ring true to anyone who has experienced such swells of complicated emotions.  I Hate You, Please Read Me shows a deep understanding of how humans communicate their emotions (or utterly fail to), and most importantly, how self-awareness is not the same thing as self-acceptance.

Find I Hate You, Please Read Me here.

Selena Cotte is a poet/writer/shapeshifter living in Chicago by way of Orlando. Her poems and stories are published or forthcoming in journals such as HAD, Ligeia, Maudlin House & others. She can be found online @selenacotte.

Read Next: THE LAST INTERVIEW: Blake Middleton vs. The New Guy at XRAY