On my fortieth birthday, my old friend A– sent me the following message: “Happy birthday, bro. Mark Fisher summited Everest last week.” As Mark Fisher and I hadn’t been friends for at least twenty years, this news was not meaningful to me except in so far as it provided a measure relative to which all of my own accomplishments in life suddenly appeared quite meager. And on the day of my fortieth birthday, no less! In bitterness, I composed the following reply: “That’s cool, but not as cool as when I summited your mom last night,” and only after not receiving a response remembered that A–’s mom had just recently died of something unpleasant involving, if I was not mistaken, her colon. Some months later, another old friend, J–, asked me if I’d heard the latest from A–. “No, and I don’t expect to,” I answered, and for the sake of explanation told him exactly the same story I’ve recounted here. When I finished, he was uncharacteristically silent at the other end of the line, at which point it dawned on me that it was actually J–’s mother, and not A–’s, who shortly before my fortieth birthday had died of something unpleasant involving, if I was not mistaken, her colon.

Eli S. Evans’s work has appeared or is forthcoming in N+1, Berfrois, Queen Mob’s Teahouse, Johnny America, Eclectica, On the Seawall, and Drunk Monkeys, as well as several other now defunct publications. He would like the reader to know that the part of this story that’s not true is the part where he’s the asshole. 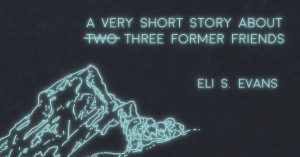 Read Next: TASTINGS by Colin Lubner