Jessa hears a bear. Only it’s not a bear. It’s the wind nudging against the nylon of our tent, but my new wife has never camped on a grassy bald in the Smoky Mountains. So when she elbows me, whispers, is that a snout? where the fabric pushes in against her sleeping bag, I say, probably. I say, you didn’t bring in a candy bar, did you? She knows this story, that tent walls aren’t really walls and that a bear can slice right through them, drag you away for a bit of chocolate.

Next to me, I feel her go still so as not to provoke the bear-that-isn’t-there. She steadies her breathing, in and out, and soon she’s as calm as a corpse, also afraid and very alive.

I’ve told her other things, some true and mostly not. Bears smell fear, I say. You’re not bleeding, are you? Imagine, I tell her, if our tent was invisible, what we’d look like to them—other animals, too. Lonely pink babies under the cold Tennessee sky.

We don’t pass many thru-hikers, and the ones we do have trail names: Rock-n-Roll, Jumpy Cat. Men whose necks have furred and, once, an old woman with two filthy Pomeranians. Bear snacks, I whisper. We share tortillas and pouches of peanut butter. We muse on the weather, what it might become—I predict lightning and gusts that will blow over trees. When we ask for the hikers’ real names, they laugh and say, those names don’t count out here.

See? I say to her later. We sit alone on a fallen yellow birch. I breathe in the musk of her unwashed clothes—fires put out and canvas grown damp—her botanical smells long gone and scrubbed clean. In a nearby tree, a rat snake catches an errant ray of sun. Your name doesn’t count out here.

She carries a green backpack. She likes to blend in, and she packs it each morning, the sleeping bag then the tent poles then the bear canister then the snacks, in order of what she most wants to keep dry. I’m an apex predator, she says, big with her backpack. Maybe that’s my name, she says, and I say, you sure about that?

And then, on the last day, we do see a bear.

It’s foraging along the French Broad River. It’s midday, and the river’s swollen with rain; the rush of it leaves me dizzy. The bear. She shrinks into that green backpack, rigid as the hills. The bear, the bear. For a moment I think we’ve conjured it. It’s a few yards away and can smell us, I know, the memory of cooked meat still clinging to our hair, whiskey on our breath. Somewhere, a dead branch cracks to the ground.

The bear sniffs and then huffs, its mouth a cave. Her fingers curl around my fingers, and I feel her pulse, or maybe it’s mine, a heartbeat between our hands. We are small and we are nobody. But then the bear turns away and ambles on, no reason why or why not.

He’ll be back for you, I say, though she knows this isn’t true. We’re spending the night in Hot Springs, in a cabin, in a place where bears can’t go, and she will be Jessa once more.

Next year, we’ll visit the sea. We’ll rent a kayak, and it will be her turn to lay me low, to make me forget my name.

Shark, she’ll whisper from behind as we paddle into the blue, our boat like a toy bobbing in the swells. I see a fin, she’ll say, over there, on the horizon. I’ll get the shiver; my nerves will bloom. That means he’s hunting, she’ll say.

Nicole VanderLinden’s fiction has appeared or is forthcoming in Shenandoah, Pithead Chapel, Jellyfish Review, and MoonPark Review. She’s an associate editor at Colorado Review as well as a reader for Ploughshares and the Masters Review. Her book reviews have appeared in Colorado Review, the Masters Review, and the Denver Post, and you can find her on Twitter at @vandanicole. 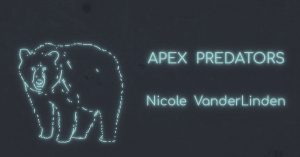 Read Next: THE CORRECT HANGING OF GAME BIRDS by Rosie Garland