Stunned, I took the subway and rattled off to work at the Starbucks on 51st and Broadway. My brain’s way of assimilating my mother’s news was to take customers’ orders while imagining plunging a knife into their chests. Would I have to struggle to penetrate their clothing? Would there be a slurp of suction when I tried to yank the weapon back out of their flesh and muscle to repeat? Would they fight? Would they be angry? Surprised? Terrified? What would they say? What would their eyes look like? What would it feel like to not turn back? To go for blood? To go for death? And when death came would I know it right away? And when I knew it, what would I know?

I knew I would probably feel alone.

I mean, customers would call the police. Co-workers would restrain me. I would be physically surrounded. I may even be physically assaulted. If any of those people liked me before, they wouldn’t now. They wouldn’t know who the hell I was. Their eyes would drain of all recognition. Fill up with something else.

But if I was by myself? Say it was just me, and the dead woman who raised me, rent open on her bed with her violet patterned sheets, her down alternative comforter that had comforted me when I was young, and scared, and overtaken with the flu? If it was just me and a sudden silence? No burbling? No screaming? No pleading? No labored inhalations. Excruciating exhalations. Just me and the darkness, and the curtain blowing over the window where I had left it open after I crawled inside? What would it feel like then? With only myself and this thing I did? This bad, bad, bad, bad thing? Would I feel horrified at myself? Regretful? Or proud? Satisfied? Hopeful?

They say he did it for the money she wrote him in her will.

Two years before the killing the killer told me he was scared of birds.

The killer wasn’t a killer when I met him in San Francisco in that shitty old car full of my shitty old relatives and my mom’s friend Becky, who wasn’t old or shitty, but hot in a 1980’s way: hairspray, lip gloss, frosted hair. The killer was still a kid. A teenager. On drugs, sure. A high school dropout, sure. But he was still a kid, a teen, a young man, a person with positive potential.

I shared the backseat with him and my mom’s cousin who was the type of woman to carry a purse big enough to fit her full size salad dressing bottle and leave enough room to spare to shovel in more free samples of dog treats from Petco than was reasonably appropriate. Like, the employees side-eyed her and hated her with every fiber of their polo shirts. I could tell. They weren’t happy with me either. My mother’s cousin, Jackie, introduced me to the killer, “He was my job after you,” she said.

She knew us when we had tiny faces and giant eyes. Before we learned how to wash our hands.

I’m not sure why the killer went on the crazy lady outing. Maybe he was bored. Maybe it was about the free food. Maybe it was Becky and the vanilla perfume she wore.

I wanted the free food and the ride to the pet store. I was in the process of replacing my boyfriend. I had already bought a vibrator and was currently on step two: companionship. I wanted a bird. Something beaked and winged that had the potential to fly to wherever the hell it wanted and start a beautiful life in the tree of its own choosing. Something that could poke the eye out of anyone who tried to stop it. I wanted a metaphor for my spirit (the irony, cruelty of this, totally lost on me at the time) and I wanted something to make sounds in the night to distract the ghosts that played mean tricks on my dreams.

While Mom’s cousin was shoving “free” pet food crap in her purse, I looked at the birds, the killer orbited around me, hands in his pockets.

When I found the black hooded nun finches, I knew I had found my bird. The auburn body, the waxy blue beak erupting from a jet-black head. Unconventional. Goth. Tiny. The employee I fetched was not wild about having to do what he was about to do. I overheard him talking to a coworker, “Last time we did this, all of the fuckers got out. Some of them are still up there,” he pointed to the beams beyond the lights.

The black hooded nuns bolted into all corners when the employee stuck his hand inside the cage. So much frantic flapping and fluttering. A bird was caught. Dropped into a box handed to me.

“I don’t like birds,” the killer said. He hadn’t left my side. He watched the whole thing.

“Why?” I said, the small brown box in my hand. It was so light. It could have been empty.

“Scared of them,” he muttered. I probably made an understanding face, but I thought how stupid, tough guy, scared of birds. Really I wanted to laugh at him so hard.

The box with the bird was so light.

I didn’t laugh at the killer because I gave a shit about his feelings, but because the box was so light.

I didn’t laugh at the killer because I wanted to shake the box.

I wanted to shake the box so badly. I had to breathe slowly as I carried it to the register.

I was scared of myself, shaking that damned box.

I knew there was a living creature in that box. I knew shaking the box would be bad for the creature living in that box.

Feeling is a body knowing.

Maybe the killer’s killing had nothing to do with money.

Maybe he didn’t even hate the woman who raised him?

Maybe he didn’t even want to hurt her?

Maybe there was just something he wanted to know?

The customers I didn’t hack up and kill got their delicious lattes or Frappuccinos or whatever the hell and they left, going on with their day, and if they thought of me at all, they probably thought I was nice, or awkward, or cute, or wasting my life, but they probably didn’t think of me, and they certainly wouldn’t have imagined that I was thinking about where best to stab their particular body, and with how much force.

Sometimes, those days, walking around New York City, I’d be walking behind a group of young women in skirts that lifted up above their knees, exposing that soft place of skin behind, and I wanted so badly to lean in and touch them there. Just this small little trespass. Just this one little thing. Who could that hurt?

I just wanted to give the box the littlest jostle.

Something people seem to believe is there is only good or evil, only person or monster. People are good. Monsters are bad. Supernaturally bad. Demonic. Diabolical. People are superior to the monsters. No empathy for the devil. ‘Cause once you start empathizing with the killers, what does that make you? A monster yourself? An accomplice? A devil with a Fast Past to an afterlife of somehow very painful horrors? And fire? Lots and lots of fire.

Writers know that to make a believable character, a human being, you mix the good with the bad. The NICU nurse shoplifts candy bars. The arsonist brings flowers to the nursing home.

The killer wasn’t always a killer. Once the killer was a baby, born drug dependent because of his mother’s choices. Once he was a toddler learning how to walk. Once he was a little boy laughing, milk dribbling down his chin. Once he was so small with shining eyes that still trusted the big people around him. Once he was innocent.

I named the black hooded nun finch Quiver. The thing I didn’t kill, I caged, fed, and played classical music for. Eventually I gave him away to a nice lady on Craigslist. I moved to the other side of the country. Found out that troubled kid my mom’s cousin loved so much brutally murdered his mother, and I couldn’t understand how someone could do something so grisly, so heartless, so willfully violent. I could get how someone would want to do it. How someone could think of doing it. How someone could imagine doing it and plan doing it, but how do you actually do it?  How do you push a knife into someone, and hurt them, cause them horror and pain, and not throw up, not throw your body into a shock of seizures to stop you from doing this thing?

How do any of us actually know what we’re capable of?

I was a terrible bird mom. I had no idea what I was doing. I named my black hooded nun finch Quiver because it seemed scared all the time and of course it did. I was this huge lumbering thing that trapped it.

When I’d slip my hand in the cage for feeding or cleaning, Quiver would freak out, flap in a frenzy.

I didn’t know finches weren’t supposed to be alone, without other finches that they could die from loneliness. I tried to get him a friend, but no one else would sell me just one.

When I bought the bird it did not matter to me that I probably wouldn’t be living in San Francisco much longer and that I wouldn’t be able to take a pet with me when I left.

I made myself imagine inflicting horrible physical violence on my customers, and I could imagine it, and it made me physically ill, hunched over my register shaking.

All there was for me to understand was this.

So if you should ever see me shudder while you’re talking to me and you worry I’m thinking of jabbing you in the eye with the kebab skewer, just know it’s nothing personal, just know I’m probably as harmless as a tiny, tiny bird.

Caroljean Gavin’s work has appeared or is forthcoming from places such as Barrelhouse, Bending Genres, The Conium Review, and Pithead Chapel. Currently she is working on a novel, a story collection, and putting together/editing an anthology of short fiction based on the jokes of Mitch Hedberg. Find her on Twitter @caroljeangavin. 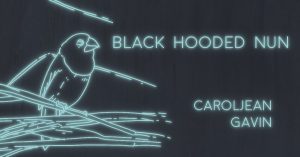