My aunt and uncle on Long Island, for whatever reason, had a big-box VHS copy of I Spit on Your Grave in their collection, nestled somewhere between Stripes and Mr. Mom. I never asked about it, or even watched it, but it always kind of confused me. I thought it was a porno or something. I finally ended up watching I Spit on Your Grave as a teenager, which made me thankful that I didn’t watch it as a child, though I did accidentally catch A Clockwork Orange on Cinemax at a very young age and it completely freaked me the hell out.

Very often film is one of the ways we first come into contact with a world outside that of our direct experience. Which films introduced you to areas of life away from the familiar circumstances you grew up in?

The coming-of-age films of John Hughes showed me that rich people have problems also, I guess. And it took me years to realize it, but Revenge of the Nerds taught me that nerds too can be real shitty, problematic people.

As a child I became obsessed with this Swedish film called My Life as a Dog that I’d see on HBO. It’s about a poor, lonely kid whose mom gets put in a looney bin. Then his dog is placed in a kennel. He gets abused by relatives and teachers. He learns to read by reciting lingerie catalogs to some creepy old man. Then he befriends this girl who is kind of a tomboy and they box for fun and they beat the crap out of each other. Then there’s a scene where he takes a bath with the tomboy and it all seemed very sexual and scandalous to me. It felt very much like watching porn, this movie. It made me feel icky and sad and enthralled and I’d only watch it if nobody was home.

The mid-1980s horror film The Gate showed me, at a very young age, that if you throw a dead dog (your untreated trauma and neurosis) into a demonic hellhole in your backyard (the void that exists within yourself) that bad shit will happen.

Can you talk about the influence film has had on your writing?

Plays, specifically movies based off of plays, probably influenced my writing quite a bit. Like Mike Nichols’s Who’s Afraid of Virginia Woolf?, or stuff like Comeback, Little Sheba. Splendor in the Grass. Tennessee Williams adaptations. I related to dialogue-heavy dramas about broken people. Experiencing Douglas Sirk films like Imitation of Life and Written on the Wind will really allow you to take your writing out of its comfort zone and just go bonkers with it.

I try going into each writing project with the same energy as an Ernest P. Worrell film, especially Ernest Scared Stupid.

What directors, film movements, or particular actors have been an influence?

I dig all the New Hollywood films of the 1970s. Hal Ashby, John Cassavetes, Peter Bogdanovich, etc. etc. That’s the best stuff, in a lot of ways. Great character stuff. Lots of hidden gems, too. Like Searching for Mr. Goodbar and Joe. Robert Altman’s Nashville is pretty much Brothers Karamazov, but better.

Have you ever made a film? If so, has the process of doing that had an influence on your writing?

I’ve acted in little short films that friends and I have made, but nothing too serious. I would be down to do something more substantial one day. Filmmaking is a lot of hard work, even doing just nonsense stuff.

Are there films you associate with a particular time in your life, or a specific writing project?

Ghostbusters will always remind me of childhood, especially because my mom sewed me a Ghostbusters jumpsuit for Halloween one year.

My buddy and I, as teenagers, snuck into a screening of Boogie Nights, but it was at the end where the drug deal goes bad and then Mark Wahlberg shows off his prosthetic penis. We obviously stayed for the next showing.

Donnie Darko was kind of the movie of my twenties. I first saw it while my band was on tour and we were crashing on someone’s floor in Chicago. I didn’t think it was very good at first, but everyone I spoke to loved it. It took several viewings with different people at different periods of my twenties to really appreciate it. It’s now a movie I revisit often.

My thirties were mostly spent in a majorly depressive stupor, though I do remember being very charmed by Frances Ha for quite some time.

Note: How any of this random bs relates to specific writing projects, well, I have no clue.

I grew up in a trailer park in south Florida, so maybe Gummo? I don’t think I put too much “place” in my writing, at least not intentionally. I guess I’m more into characters and situations than surroundings, I don’t know. There’s been a lot of films and TV shows made in Miami. The Larry Clark movie Bully was made in the neighborhood where I grew up. (The Florida Project also captures that empty, Florida outlet mall spirit pretty well.) I live in Gainesville, Florida, now, which is where that Paul Giamatti movie The Hawk is Dying (based off of a Harry Crews book) was filmed. That was 15 years ago, mind you, so the city has changed quite a bit since then. That’s one great thing about film—it captures a certain time and place to revisit, which is comforting.

I mostly watch films I’ve already seen several times and I do that more than checking out newer releases, which is probably a bad habit. I think it means I have anxiety and that I’m mostly depressed. I especially enjoy revisiting “light and crunchy” stuff. For example, I recently watched 10 Things I Hate About You again, and let me tell you, it still slaps.

I regularly say “Dishes are done, man,” from Don’t Tell Mom the Babysitter’s Dead, even when there are no dishes involved. Also, I’m pretty sure I still quote Wayne’s World as much as I did as a teenager and people rarely know what the hell I’m even talking about. A sphincter says what?

The super sad ending in Wayne’s World where Wayne’s hot girlfriend resents him and all his idiot friends perish in an electrical fire.

My mom took me to see that violent Stallone cop movie Cobra when I was a kid and the film opens with a gun pointing directly at the audience and I remember it giving me quite a jolt. I probably peed my pants. My mom was nuts, by the way.

Pretty much any John Waters movie gives me a creative charge, though the results are never as funny or brilliant. See also: the work of Rainer Werner Fassbinder.

Probably my book Something to Do with Self-Hate, which would make a sad tour de force about lost, damaged people further damaging themselves. A real “feel bad” flick. Lars von Trier could direct.

I recommend Shakespeare’s Thrashin’ (1986), where the older brother from The Goonies falls for the leader of the rival skater gang’s sister at a Red Hot Chili Peppers show, which Shakespeare rewrote in 1993, replacing the skateboards with rollerblades and calling it Airborne. 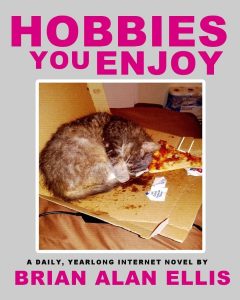 Read Next: SHAWN BERMAN on film with Rebecca Gransden