COME HERE, I WANT TO TELL YOU SOMETHING by Jamy Bond

Sometimes, I would catch her peering through a crack in my bedroom door as I changed, watching me with those blue dagger eyes. “Do you think you need some new bras?” she might say later, “those no longer seem to fit.” A way of letting me know what she’d seen.

Locks were not allowed in our house, not even in the bathroom, and sometimes she would stand outside of the door while I bathed, chatting away like we were friends.  She’d rattle the doorknob, just to let me know she could come in if she wanted to.

Come here, I want to tell you something, she’d say.  It always made my stomach drop, my throat freeze, a strong metallic taste creep into mouth.  “Your dad has some disease.  But he wants me to touch it anyway.  He wants me to put it in my mouth.”

I was 12 and had kissed a boy once under the strobe lights at the roller rink.  He pressed his tongue between my lips.  He tasted like root beer and ripe bananas.

Sometimes she would press up close to my friend, Rick, when he came to see me. “You’re too young for boyfriends,” she’d say. One time she gave Rick a Coke and sat on the porch in her black miniskirt, talking nonstop while he watched her crossing and uncrossing her legs.

Come here, I want to tell you something. “My father used to beat my mother.  But I was always on his side.  She complained too much.  She whined all the time.  She deserved it.”

Sometimes, she’d call me into the bathroom to keep her company while she bathed, the shower curtain wide open so I could see her rubbing her breasts with soap.  “Don’t forget our secret,” she’d say.  “A girl stays loyal to her mother. Always.”

Once, I took a knife from the kitchen and crawled under my bed, pressed the sharp blade against my arm until the skin split, bloody and warm. If I were to cut her open what would I find inside? No pulsing organs. No human meat. A yellow, waxy slime.

Sometimes I hid in the closet, beneath a pile of old blankets that smelled like mold, and tried to merge with the quiet and the darkness. I tried to melt into nothing, into non-matter, into liquid that evaporates, into dust that scatters, into rising ash.

Come here, I want to tell you something.  “Lie down with me.  Hold me close. Consider yourself lucky.  You have me to take care of you,” she’d say.  “When I was a little girl, I had no one.”

Jamy Bond’s work has appeared in Wigleaf, The Rumpus, The Sun Magazine, Peace Corps Writers, and on National Public Radio’s The Sound of Writing.  Her essay, What Feels Like Destiny, published in The Sun, was nominated for a Pushcart Prize.  She has an MFA from George Mason University where she co-founded So to Speak: A Feminist Journal of Language and Art.  She lives in Washington, DC. 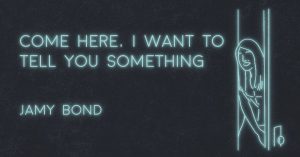