Harry and Al were at the bar when I showed for my six o’clock at Hap’s. A young couple smoked in the back booth; a bluish cloud hovered over them. Four roughs fresh off a rig huddled around bottles at a tall table. Decent crowd all told.

I prefer showing at six instead of four. It’s hard on Huck since I’m here until two, but the four to twelve loses late-night tips and four to six isn’t money anyway.

That time of evening the sun cuts sharp angles across the bar so bad you can’t sit some places. I ducked and moved around bullet trails of sunlight staying busy.

“Watching the baby and his shows.”

“Whatever happened to that college boy used to come in carrying on about you?” Harry said. “Seemed awfully smitten.”

“Just another barking at the tree, Harry.”

“Anyone can look and say what they think about what they see,” I said. “Free country, still.”

Harry wasn’t long divorced. Al was long since. Can’t imagine the friendship helped either. Those two aren’t all bad, but the women they get in with all are.

I remembered the college boy. Corn fed, blonde mop. Somewhere Midwest raised. Football player at UT Permian Basin, so not much good at it. I was flattered, but Huck and I been together ages, plus the youngin’.

I set sights on wiping glasses clear and Harry and Al hunkered down to discuss things that had been and could of.

The sun settled and the night crept calm until Kenneth showed up the same time the young couple was leaving. He watched them go with their hands in each other’s back pockets, buzzed, and making no attempt to hide what they’d be embarking upon next.

“Always the same sad fucks in here,” Kenneth said, dropping a duffel bag on the bar with a clank.

Kenneth lost work at the refinery about six months now. Each time in it’s worse.

“How you making out, Kenneth?” Harry asked.

Kenneth and Al stared each other down.

I slid a double whiskey and a Lone Star. Kenneth killed the whiskey then hurt the Lone Star.

Around the same time, a fella wandered in who appeared lost. Noticed the emblem on his jacket—West Texas Wind—and hoped Kenneth didn’t.

“You ain’t even gotta say it, fella,” Kenneth said, noticing.

“You here about the wind?” Kenneth asked.

“I said you here about the wind, boy?”

Kenneth got close enough to kiss him and poked a stiff finger into the wind emblem.

“Kenneth, don’t you have anything better to do than harass people just trying to take a load off?” Harry asked.

“No, Harry, I don’t,” Kenneth returned to staring at the wind man.

“We still putting this on grandma Margie’s tab, Kenneth?” I asked.

A hush fell over the bar and it felt awfully like I shouldn’t have said it. But I can’t very well let Kenneth make everyone uncomfortable because he’s on the low and has been.

“Huck know you got stones to talk to men that way?” Kenneth said. “Out here making money for a baby he can’t support?”

“What are you going to do, old man?” Kenneth said. “Besides make me mad?”

“Kenneth, you never heard of a man staying at home with a baby, and a woman making the money to support it?” I said. “Attitude like that might be the reason you’ve got woman troubles.”

“You’re right, Claire, I’m sorry.” Kenneth said after a moment. “That was out of line.”

I poured Kenneth another double hoping to make peace.

“Best get control of this old son of a bitch,” Kenneth said.

I pushed a tequila and a frothy draft in front of the wind man. The others watched like I was the momma and him the favorite. He sipped the tequila. I knew he was in for it.

“Jesus, you fuck that way, too, boy?” Kenneth said. “You drink like a damn baby. You probably spew in a second.”

Kenneth killed his whiskey in a gulp.

“Miss, I believe I’ll settle up,” the wind man said.

“He ain’t paying yet,” Kenneth said, slamming his fist on the bar.

Kenneth watched me slide the bill over, watched him sign and slide it back.

The wind man fell blank as a simple one. All the air in my lungs rushed out at once and I couldn’t figure out how to let any more in. Harry and Al stared at their bottles.

Kenneth finished his Lone Star and addressed his terrified audience.

“Who could blame her?” Al said.

Harry stared at Al with eyes big as a couple planets.

I witnessed something bad click in Kenneth as Two Tickets to Paradise by Eddie Money came on the jukebox. He and Carrie danced to it in Hap’s one night must have been eight months. Only two dancing at first. By the second time the chorus hit, whole bar was dancing.

No one seemed hot to answer.

“Give me another,” he yelled in no particular direction.

I poured Kenneth another and promised myself it’d be the last.

“Carrie’s staying at the Royal Inn with a new fella,” Kenneth said. “A Mexican.”

“Seems clear she doesn’t want you around,” Al said. “Ought to respect a woman’s wishes.”

“Yeah, well maybe her new fella isn’t supposed to be in America at all,” Kenneth said.

Kenneth dug in his duffel and pulled out a pistol.

Kenneth pushed Harry aside and pistol-whipped Al. He crumbled to the floor. The wind man blew right out the door running.

I wrapped ice in a towel and hustled around the bar.

The oil men stood at the commotion. A bar chair crashed to the floor.

Then Kenneth pulled out an AR-15 and spun it to sit the oil men down.

“I’m going to that fucking motel,” Kenneth said. “Who wants to stop me?”

No heroes among us.

Kenneth lowered the rifle, tossed the duffel over his shoulder and pushed open the door. The darkness outside consumed him.

I dialed 911 and said what happened.

“He’s going to get himself killed,” Harry said.

“I hope he does,” Al said. “Tired of him ruining my drinking.”

When I got home, the news was on every channel. Huck scooped me up and squeezed so tight I remembered feeling. You see love when someone’s face betrays that they’ve been thinking how much they’d miss you.

Kenneth was dead. Shot by police. Killed Carrie, her lover and six others. Stalked the second-floor balcony executing whoever came out. I wouldn’t have believed it if you told me.

I went in the nursery. The youngin’ was sleeping sound. I kissed her tiny head. It still felt fuzzy and smelled new. She rustled just a touch. I sensed Huck watching from the doorway.

We spooned in the silent darkness of our little bedroom in our little house. He ain’t nothing but sweet. I turned over and we got to kissing. Then my clothes were sliding off just like perfection. I figure if we’re living in a world this confusing and full of hate, nothing I can witness will stop me from making love.

Wilson Koewing is a writer from South Carolina. He lives in Denver, Colorado. His work is forthcoming in Pembroke Magazine, Ellipsis Zine, Tiny Molecules, (Mac)ro(Mic) and The Journal of Compressed Creative Arts. 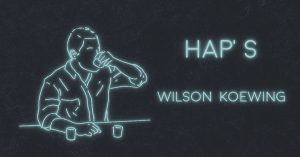 Read Next: HOME AT LAST by Greg Oldfield