There it is. That particular tone that wakes me up from a dead sleep. Primal, sometimes guttural. Almost inhuman. Or so very human, more human than people ever dare to be. I feel for my phone in the dark. Corner of the nightstand. Lamp. Glasses. Phone. I get out of bed with less urgency than the last time and even less than the time before that. I flick on the lights and watch her for just a second. Hair in her face. Fists clenched. Body convulsing. I check the foam padding I put on the side of her nightstand from when she hit her head the first time. I look at my phone to hit record.

We didn’t always capture the flashbacks. It used to be a novel thing where I would jump out of bed, heart pounding, trying to be her hero. I thought about all the ways I’d seen people snap out of it in the movies. You yell at her and remind her who she is and who you are. And your firm grasp on her shoulders, your skin on hers tells her she’s safe. Maybe if I just love more, with more intensity. I pinned her down and pried her eyelids open so she could see me. Her trembling eyes stared right through me, as she continued to kick and fight me off like I was him. I finally understood what a flashback truly was. She wasn’t here. She was gone, far away, back to the place, back to the time, back to the moment, back to a little girl’s fearful present.

So here I sit on the edge of the bed, holding my phone while it records the girl biting down on the pillow, bearing the gruesome scene so later she can view it herself even though it will play out just the same as all the other ones, her quivering body always facing down to the right side in the same way with her hands held wide open and shaking out in front of her face like she’s desperately trying to push something away. Her quick shrieks now fully grown sobs and wails, the kind where you swear you can actually hear the heart breaking over and over again, forced to accept the impossible as truth. I can almost see him on top of her, like someone photoshopped him out of the picture and left only her, maneuvering, fighting, pleading, screaming things like “Please, please no!” and “I can’t! I can’t! I can’t!” and eventually her body goes slack and surrenders. Her voice is far away and lost. No words, just little humming sounds. Rhythmic, distressed humming sounds as I see her body jolt forward again and again. Her eyes open wide and empty. Now she is truly gone.

I continue sitting and recording and waiting until I recognize her face again. Her eyes finally familiar and soft, still searching for a fully formed reality.

She stares straight ahead, crawling away from memories, the thrown pillows, the thrashed sheets, and nods a small but heavy nod. Her unsteady hand reaches out for water. And more water.

Rebecca Portela is a writer in New York City. She has a BA in Psychology. Her most recent work can be found in Idle Ink and Beyond Words Literary Magazine (forthcoming). Her cynical idealism is showcased on her twitter @veganbex. 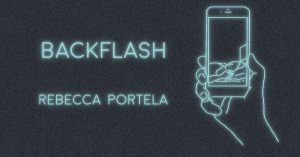 x-r-a-y magazine
COME HERE, I WANT TO TELL YOU SOMETHING by Jamy Bond
HAP’S by Wilson Koewing