SONG FOR AN EMPTY WORLD by Miles Coombe

The road is lit with street lamps. It’s weak, bulbs on the edge of giving out, but the glow is still there.

I am in his bed, a fresh bruise over his eye this time, and curled into his side. He feels smaller with my arms around him. My eyes are closed and I see an explosion of grey in a room too white to be real, and where I know there should be screaming, my own included, there is only static. He wakes, with a hammering heart and a cry on the tip of his tongue. Something inside him has fractured and a crack in his skin slips from the corner of his eye and falls over the bridge of his nose. I think my chest is caving in, that my lungs have stopped working. Something about the glassy look in his eyes makes me feel exposed. He was beautiful in a sort of starving way, like there was always something more he needed. Clearly, he was more lost than I was. Sometimes he stared at nothing and cried. He was gone, into his head, curled into a ball on the floor.

Something builds inside me. A storm, a tornado, untamed and unchecked, threatening to burst free. It’s the feeling that pushes at my skin when I can’t sleep, when I feel like I can’t breathe, when my ears are ringing.

The world spins so fast it turns to a motion blur of shadows and dim lamp light, and the off-white colour of the wall has turned blue. My head is spinning, everything is spinning, I feel all the air from my lungs recede, and stars swim in my vision. Time narrows down to a single point, a tape recording over itself.

The city lives and breathes on around us.

All I could hear was the empty horizon and his warmth that filled it to the brim. He was nearly there, close enough he could taste the gray on his tongue like cotton wool. The edges of his voice tinged with a gentleness only reserved for the sweetest, prettiest things he saw. There are patterns in my periphery as the world bends and sways around me, like branches of young trees caught in the wind. The evening is quiet now, a sort of careful stillness that would be so easy and awful to break. He welcomes its hold, falls limp and boneless as it swaddles him in its folds. Eyes shut, mouth parted, it’s peaceful in this deep silence, weightless and still.

here I blur into you

I kiss him until the kiss consumes us both. The music has long since stopped and neither of us notices. The lethargy of the high washes over us in gentle waves and we fall asleep curled around each other. I’m falling into him, against him, under him, at his knees, on his back. Everything is falling, everything is collapsing and sliding and slipping, losing grip and sinking, one last point of contact, one last kiss, one last chance, one last abyss to topple into. When he kisses me it’s desperate, it’s pleading, it’s begging, every midnight cross-faded wish pressed between us like a prayer.

If there was a colour to those days, a colour for me and him, a colour for kisses and pills and dying, it is every colour of pink and blue, the dark lights and the pale shadows in the almost darkness. The memories are blurry but the colours are still there, cutting like knives. I am aching. I feel like I’m drowning and on fire at the same time. I just know that the space around my heart, where all the horrible things build up, thick, and wet, and poisonous – the space I flooded with opioids, weed and pills – is suddenly, blessedly empty. As though someone has reached in and scraped it all away.

When he presses against me, terribly thin body, yet grounding as a heavy blanket, his mind slips into my own, his eyes are shut, but not tight, and his mouth is open slightly. I can feel the shallow rush of breath over my skin. If not for the frenzy he had been in a minute earlier, I might have believed he was sleeping. If not for the wet itch of tears running onto my neck, I might have believed he was peaceful. His words hurt, they burned like a brand, but I shut my ears to the flow of his voice and try to ignore the pain in it. I look the boy dead in his eyes, searching for an answer behind the tortoiseshell. There’s a desperation at the edge of his iris, fear evident, but he still doesn’t look away. Eyes raking over inconspicuous bandages, brushing fingertips over bruised faces, running lips along bloody knuckles. Another collision. A car crash, our bodies strewn across the road, across the mattress, blood on the asphalt, teeth pulled blood up under the skin, gasoline in the air, the scent of sweat. Sharing bottles, cigarettes, forehead to forehead with breath intermingling, afraid to make it real, until we had nothing left to lose.

Yes, Lucas was Lucas. He drank vodka from the bottle at 11am. Snorted pills off the floor. Spoke Dutch while high. Was often dangerously malnourished. Had unexplained bruises in blues and yellows. Sniffed glue in the park after school. He was loud and obnoxious and loved hitting people in the face. That was daytime Lucas, Lucas while awake. But at night, it was Luca. Maybe I comforted him because I knew he was haunted by thoughts of the street and the memories of all that came before. But perhaps we both felt this way and, for some reason, I comforted him the way he did me. Two jagged pieces of a puzzle that together make a complete picture. The nights were broken, fragments of shattered sleep and soaring highs. When I would gasp for breath and be unable to shake the fear out of my face and arms because I was still falling, it was he, Luca, who, with bruised yet nimble hands, caressed my face to still the fall. The nights were the best because it was when he and I were in each others’ presence the longest and in a strange way, most lucidly. At night, when he was illuminated by the moonlight, he was totally different. At night, when we were tangled together, he was all the stars in the sky, soft angles and gentle otherworldly melodies. A song for an empty world.

a low humming settled over the empty houses
something he’s never heard before
it sounds almost like stirring, like waking

And then, the sky would turn from navy to indigo, violet to magenta, amber to yellow, and yellow to that horrid oversaturated, fragmented blue. And in the light, as all supernatural creatures do, he would retreat, to the kitchen, to get a morning cup of black coffee, splashed with vodka. And when I followed him, Luca was lost.

It was Lucas again.

We stand there, looking at each other in the middle of the empty street – two boys, one high and the other sobering, words on their tongues that do not make it out into the waking world.

The night is suffocating, the sky too wide above him and the houses too big. He picks up the pace, staring intently at the asphalt beneath his feet. He’s running, almost tripping because he can barely see. The tears don’t fall, that would be too certain, he thinks. That would make it all just a little too real.

The road is lit with street lamps. It’s weak, bulbs on the edge of giving out, but the glow is still there.

Miles Coombe is a multidisciplinary artist living in London. He is a music producer, songwriter and DJ as well as a visual artist and a poet/writer. He is fascinated by the idea of modern fairy-tales. He often combines the words that he writes with the artworks that he makes. His writings are often based on youth/memory/obsession/loss/nostalgia/folklore and apocalyptic dreams. Find him here or here. 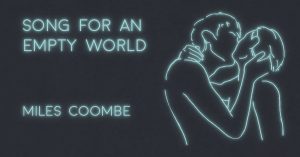 Read Next: HOLES IN THE STOMACH PROVIDE WINDOWS INTO DIGESTION by Kate Lohnes