WELCOME TO THE RECKONING by Omar Hussain

Your family’s old brown and blue station wagon pulls up to the house. It’s not your house. It’s never yours. At three-years-old, you’ve already lived in four dodgy houses, a mobile home, month-to-month condos and rent-controlled apartments. This is your grandfather’s house. He tells you and your parents that you’re welcome to stay for as long as you’d like, but you’ve heard that one before.

The wagon comes to a stop. The gears slam into park. Your dad is screaming about something—the latest rage attack. He gets out of the car, paces around the hood. To the passenger side door. Your way too pregnant mom is half-way out the car when your dad—still barking and hissing with venom in a way that makes his black mustache transform into the devil’s handlebars—grabs the door and slams it on her. She falls in the space between the car and the curb, sobbing out of fright, but mainly out of shame because you saw it.

Welcome to keeping a secret.

It’s five years later now and you’re all grown up because you are eight years old. It’s Friday night, which means your mom took you and your little brother to Blockbuster after school. You rented Beethoven—the dumb movie about a slobbering Saint Bernard. Your dad doesn’t get home until after ten because he works the late shift and you’re the only one who is a night owl like him so you stay up and start the movie together. He’s cold and short because he probably had a shitty day. At some point, the bad guys steal Beethoven and you begin to tear up. Start to sob. Your dad mocks you for it and in a split-second of dumbass kid compulsion, you turn and swat at his leg.

That was the mistake. That simple.

He lurches at you—grabs the hair on the back of your head, pulling and pushing you until he’s taken the reins. He shoves you to the ground, your palms and kneecaps your supports. His hand slaps your face west, then east, but you just count. One. Two. Three strikes. You count because it stunts the fear. It displaces the pain. Five. Six. A closed fist this time. He sends you to your room. Pulls the mattress off the bed and tells you to lay on the bed boards. You do as you’re told. Your body radiates from its wounds. You think it’s over.

Twenty minutes later, he’s back. Seven. Eight. He drags you by the arm, burning carpet against your back, into the living room hazed with cigarette smoke. He tells you you’re a lowlife. That you have no respect. He repeats these statements several times and you start to believe them. You melt. He hits you so hard with an open palm between the shoulder blades that you hear it before you feel it. You don’t stop counting until the sun comes up and he falls asleep.

Welcome to waiting for your turn.

Twenty years have passed. He’s long dead. Cancer the ever-avenging disease. Sometimes if you slick your black hair back, let your stubble become more of a beard, you can see him.

You move the cursor on Google street-level view further down your block. You stop at a navy house with white trim. Freshly built porch. In the image, there is a red pickup truck in the driveway. You’ve done this with every house leading to this one—because you’re looking for something.

Kali Linux, the hacker’s utility belt, fires up on your computer, its twisting dragon icon filling the screen. You’ve found an exploit within that house. A way in through the beautiful world of internet insecurity. The world that lets you peek into any window or room you want. You remotely access the father’s PC and activate the microphone on his computer to listen in. This digital stakeout lasts days. And then, on a Friday, you hear it. The unmistakable sounds of a child screaming. A man stomping around wooden floors, a belt crackling with glee. A woman pleads until a loud thud against a wall or fireplace silences her. The child never stops screaming.

Welcome to the reckoning.

It’s two, maybe three in the morning. The night, your friend. The darkness, your armor. You circle the side of the house. The sliding glass door to the back is left open. The ski mask gets pulled down, the condensation against your mouth instant. Everyone is asleep or faking it. The lights are off but for one room alive with blue and white hues—ghosts from the television dancing on the walls.

You find him passed out in his recliner. Rotund, balding piece of shit. Crushed beer can by his feet. Wife beater, blue boxer shorts, socks still on. Your hand grips the brass knuckles so tight it squeaks. He wakes up with a pathetic expression of shock. His eyes beg, motion for mercy.

You strike him in the forehead—his skull bouncing off the recliner like a basketball. You dribble it some more. A left hook across the cheekbone. A straight right to the nose. He grunts and rolls off the chair, crawling into the kitchen, dripping blood along the way. One soccer punt to his ribs and he collapses. You grab his throat. Lift his head.

“Do you understand why this happened?” you hiss.

He doesn’t respond. You grab a framed family photo off the breakfast nook and wave it in front of him.

He chokes and pinches his eyes shut. Turns his head away.

Tears crawl out of his eyes. He nods. You watch droplets of his blood fall from his face, listen as they pitter-patter against the wooden floor. A surge of energy ignites a growing inferno within your chest—your lungs and heart the kindle.

You leave him there.

You head back home.

Get back on the computer.

Move the cursor to the next house on the block.

Omar Hussain is a writer from the San Francisco Bay Area, transplanted to Ann Arbor, Michigan. His work has appeared or is forthcoming in Ellipsis Zine, Spelk, Dream Noir, the Drabble, the Potato Soup Journal, Fleas On the Dog and (mac)ro(mic), among others. Omar’s beta-test novel, The Outlandish and the Ego, debuted in late 2017. It received some praise, remarkably. 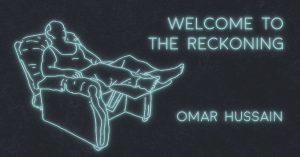 Read Next: SOMETHING WRONG WITH MY LIFE by Meeah Williams