THE FAMILY THAT SKIS TOGETHER by Kim Magowan

“The family that plays together stays together,” Carol’s father used to say, though even at the time Carol had felt skeptical about that assessment, given her mother’s aversion to all forms of competition and her brother’s more specific aversion to losing. Oh, the way Alec’s skin would mottle, the way he would say, under his breath so their parents couldn’t hear, “Well, fuck you,” when Carol would knock his croquet ball into the trees. (And Carol would feel both elated and ashamed, or more precisely, ashamed because elated, and sorry for herself for having a brother who was such a dickhead.)

Now that she’s forty-three, her father’s unconvincing jingle keeps bending through her brain, as Carol perches at the top of a mountain, willing herself to go down. “The family that skis together…”— what? The blinding snow is a blank she tries to fill.

“Flees together”? Far down the slope is her husband Jack, his parka a receding blue spot, his poles as small as thorns.

“Pleas together”? Her daughter Maureen, slower but more graceful than Jack, turns in neat bobby-pins.  A year ago Carol wouldn’t have considered sending Maureen to boarding school—she’d have missed her too much—but then a year ago, Maureen wouldn’t have begged to go. Like her father, Maureen is adept at being both sweet and convincing when she wants something.

Let her go already, Carol thinks wearily. So what? Can she even blame Maureen for wanting to flee Dodge? The kid’s no fool; their house crackles with tension. Carol would run off to boarding school herself if she could. Fuck Jack and his ridiculous infatuation with absurd Erica Chan (Carol won’t dignify it as “love”), his dithering, his one-foot-out. Fuck trying to be a good sport, jumping like a silky-eared cocker spaniel at his mere suggestion, “Let’s do some family bonding.”

Doesn’t Jack remember she’s never liked skiing? What thrills Jack and Maureen only menaces Carol. She can’t shake away the picture of careening into a pine, the breadstick snap of bones. The snow has a forbidding skin of ice: shiny, reflective. Now Carol has to strain her eyes to see her husband and daughter, so far below her. She must will herself even to try to catch them.

Kim Magowan lives in San Francisco and teaches in the Department of Languages and Literatures at Mills College. Her short story collection Undoing (2018) won the 2017 Moon City Press Fiction Award. Her novel The Light Source (2019) was published by 7.13 Books. Her fiction has been published in Atticus Review Cleaver, The Gettysburg Review, Smokelong Quarterly, Wigleaf, and many other journals, and has been chosen for Best Small Fictions and Wigleaf’s Top 50. She is the Fiction Editor of Pithead Chapel. www.kimmagowan.com. 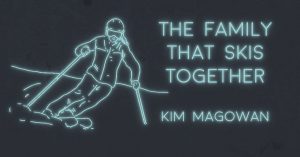