I attended Catholic school, but I didn’t believe in God. I wasn’t sure what I believed in. I wanted to believe I was edgy or rebellious, a flamingo in a flock of pigeons, or a loud tornado gliding over a quiet Midwestern town. I wandered the hallways aimlessly with no shorts beneath my plaid kilt and a fresh tongue piercing; I spoke with a lisp for a month as my swollen tongue healed. My history teacher caught on that I wasn’t speaking correctly. He promised not to give me a detention for my new body modification, even though school policy insisted he should, but he did warn me about potential gum decay from having a metal ball in my mouth. I appreciated his concern; that teacher always rooted for me. I think he was the only one.

When I told my mother about my vocational calling, we were in the car on the way home from school, a black Ford Escape that glistened in the sunlight like a damp forehead. My mother was also blonde, platinum. She always wore capris and oversized t-shirts with various logos on them. Some were for local fundraisers she never participated in and others were for tractor supply companies or breweries. Those shirts were amassed in her closet from various thrift stores and flea markets. Comfort was her thing, not fashion. I admired that about her. My mother gripped the steering wheel and called my dream ridiculous. I reminded her that God only appeared to important people, like prophets and virgins. She ignored me and asked if I’d taken out the trash in my room. Apparently it stunk in there; I hadn’t noticed.

We went to a tattoo parlor on a Saturday morning, a nice one with a fake chandelier and large fish tank in the lobby. The fish swam back and forth like they were running from something, but I couldn’t tell what. I identified with that. I told my mom we were there because I wanted to reinvent myself. She nodded and said to consider it an early birthday gift. I lay on my back while a man, who looked to be in his late 30s with a tattoo of a sphinx on his upper left arm, pushed a needle through the top of my belly button. I winced and wondered if he’d ever been to Egypt, or if he’d like to take me. The belly button gem was light blue and sparkling. It made me look edible, like candy. I looked at my piercer and smiled.

At home, in the mirror of my vanity, I pursed my glossy lips into an O and moaned. Taped along the golden frame were pictures of my dog, friends and makeup tips cut out from the pages of Cosmopolitan. They surrounded my face and torso like an attentive audience waiting for the next song, and I was going to give it to them. I was going to give it to everyone one day. I slid my tongue over my braces, feeling the rough grooves of metal before grabbing my bare breasts and squeezing. I moaned again. I practiced, and then I practiced some more. I slipped my fingers in between my lips and sucked. It wasn’t enough, though. Nothing was ever enough, and I threw a fit. I needed actual practice; I needed a boy.

I began to spray-tan. I used those cans from the drugstore. I’d baptize myself with the orange spray as I leaned my naked body against the walls of my shower. My mother complained it stained the white porcelain; I complained she spent too much time drinking on cruise ships with male suitor number five, or six or seven. I lost count.

My naturally curly hair became fried beneath the tongs of my flatiron as I straightened it stiff, and I wore heavy eyeliner, thick and black like the ink of a King-Size Sharpie.

“If I wouldn’t pose for Playboy in it, I don’t leave the house,” I told my friends on the school track as we stretched our legs before practice.

I then lifted my arms upwards over my head, reaching and reaching until my shirt rode up enough for my belly button piercing to show. The girls stared and asked me about it.

Coach yelled at us, “Stop talking and run!”

And I did run—away from home in the black Ford Escape. I drove on the highway barefoot, my dirty sneakers tossed into the backseat along with a duffle bag. All it held were four half-empty bottles of nail polish and a few pairs of dirty underwear I found beneath my bed, because I hadn’t done my laundry in a while. I drove fast, but I shouldn’t have. I didn’t actually know where I was going; the whole thing sounded better in my head. With each slam of the brake, my toes pressing down hard on the pedal and the tires screeching, I yelled expletives out of the half-open window. My mom asked via text where I took the car, and I responded, my fingers thumping angrily against the keyboard, “Fuck you.” She could use her company car. I drove for thirty minutes before getting off on Exit 31. I went to my friend’s house and ended up staying with her for a week. When she asked why I left home, I told her it was my mom or something like that: “She’s fucking wack, dude.”

During my stay, my friend and I went to different malls and shoplifted. We drove to our local mall, then to the mall in the next town, and then to one in the town over. I would drop frilly G-strings from display counters at Victoria’s Secret into my purse. I ducked behind scantily clad mannequins in bridal lingerie and threw more panties into my bag. I accidentally swiped a pair that said, “I Do,” on the butt in shiny rhinestones. But the muffled sounds of the mall cops’ walkie-talkies in the distance scared me, so I tugged at my friend’s sleeve and we left.

We made our way to the riverside. A flickering light bulb surrounded by giant moths guided us to an adult-oriented store called Southern Secrets. We got in without being carded, which I took as a compliment. I must have looked mature for my age, or fuckable, so I covered my braces with my lips. Reaching my sticky palms out towards the shelves of erotic merchandise, nipple clamps and cock rings manifested in the bottom of my bag like a spreading wildfire. I’d been bad. I needed to be spanked, and I wanted the guy from the piercing shop to do it—the one with the sphinx on his arm. I’d ask him to call me a slut. The thought excited me, but no one was calling me a slut. My mom just called me “crazy” over a three-minute voicemail. She wanted me back at the house. I didn’t want to go, so I didn’t.

My phone, however, buzzed all night in the back pocket of my denim shorts. It was my mom again, “You need to come home. And bring the car with you, obviously.” I ignored her.

I ignored her until I stumbled back into the house on a school night. I wasn’t drunk or anything; I stumbled because I was careless, misbalanced and unaware of how to put one foot in front of the other anymore. My friend said she needed space or whatever, so there I was. I slammed the front door behind me and watched as the ceramic candleholders on the end tables shook. I liked the rattling noise they made as they shivered against one another.

“Talk to me,” my mom said as she emerged from the dimly lit kitchen. Duffle bag dangling from my shoulder and resting against my hip, I held the car keys. I held them firmly in case I decided to recoil back to the Escape and drive to Kentucky or maybe Canada.

“Talk to you about what?”

“About what’s going on,” she said.

“I knew where you were.”

Rolling my eyes far back enough to where I could see all of the pink, squishy stuff inside my head, I tossed the car keys onto the table and headed towards my bedroom. My mom stayed in the kitchen, which disappointed me. I wanted to be followed. I wanted to be chased and grabbed and tackled to the ground, because any kind of attention was good attention, at least that’s what I thought; I thought it consciously. But instead of running after me, my mom called in a relaxed tone, her voice cool and collected as always, “I knew where you were, but I didn’t know where you were going, or what you were doing, or why you were even doing the things you were doing. I was scared.”

“Me too,” I said to the door of my bedroom. I ran my fingers over the brass knob before entering, “Me too.” I lay in bed that night and thought about my destiny.

I was seventeen with scrapes and bruises on my knees from falling so much on the ground beneath me. I was good at that—falling. I would even do it on purpose and like it. The wounds were self-inflicted, and each time I found myself lying on the ground, fewer people were around to offer me kisses or gauze. But some still tried. I’d sit across from my therapist in tight mini-dresses or graphic t-shirts that’d say things like, “I’m Not Listening,” or “Buy Me Things and I’ll Be Nicer,” and she’d ask me to elaborate on my dream. She wanted to know more about what God was like, what he was wearing, if he said anything else or why I even listened to him if I wasn’t a believer. Her questions annoyed me. Batting my black-shadowed lids and crusty, coated eyelashes, long and thin like a bug’s legs, I shrugged and said, “I think you’re just jealous God didn’t appear to you.”

Kala Frances Wahl is an emerging writer from Tennessee. Both her fiction and nonfiction work can be found in the Hair Trigger anthologies. She currently serves as Co Editor-In-Chief of Alien Magazine, and you can keep up with Kala on her Twitter page, @bipolar_cowgirl. 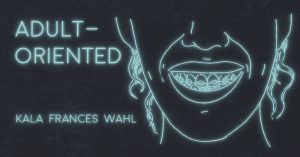 Read Next: SCURRY by Vanessa Chan