I’ve used you so many times. In college application essays, you were the tragedy I experienced early in life, the loss that made me wise beyond my years and allowed books to speak to me so deeply I was determined to become a writer myself.

(I wasn’t wise beyond my years, and I never wanted to write as much as I wanted to read.)

I recycled those same essays for graduate school applications, but when I actually made it to a master’s program and depression snuck up on me like a springtime drizzle, then slammed down all at once in a summer thunderstorm, there you were again: you were the explanation for all my psychological deficiencies. Who wouldn’t believe the world was an unsafe place, a gauntlet they weren’t strong enough to handle, after someone so important had died when they were only three years old?

Now, in my thirties, I’m still using you. You’re the ghost haunting my every decision, my every regret with your stale, back-of-the-closet smell. I’m wringing you out like an old washcloth, the one I used to mop up the mess of my subconscious. I’m eking out every musty drop in the hopes you’ll yield emotional resonance. Or at the very least, provide some justification for the stupid choices I made. For all the money I spent, the good jobs I stopped looking for, the resumes so half-assed I might as well have ripped them up and let the pieces float off like tumbleweeds.

I really am a shitty sister, aren’t I? For someone who lived less than two months, who never developed a personality, someone who was born when I was too young to remember you, I certainly have put a lot of pressure on you. How much worse would it be if you had lived?

I’m angry with you for coming to our world so briefly, arriving with the first soft snow flurries of December, and melting away before spring could even arrive. I’m angry you left me with the knowledge of how fragile life is, and how people can go on living with a part of their souls tucked away behind the winter coats. I’m angry at my parents for never talking about you. Maybe if there had been a funeral I could remember, a grave I could visit, a picture on a wall, I wouldn’t have to carry you inside me like a thousand buttercups that never opened, yellow hearts that withered on some March morning when the frost returned.

You died because you stopped breathing, when you were six weeks old, a few months after I turned three.

I’m not sure I ever learned how to breathe.

Stephanie Parent is a graduate of the Master of Professional Writing program at USC and has published essays in the HuffPost, Entropy, and many others. 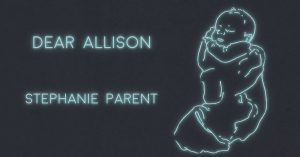 Kai Ming McKenzie
SITTING ALONE by D.T. ROBBINS
I AM NOT AN ACTRESS by Ashley Jeffalone