I had a dream about you. I sat in a pew that only had enough room for two people. Its red velvet had faded, its wooden frame splintered.

Someone played piano, sang a song for you, about you. The congregation sent up a crescendo of angel voices, enveloping the atmosphere, like a child wrapped around her father’s leg.

I’d saved that seat next to me for you, but you never came.

The dream-song, a melody I’d never heard before, stayed in my ears after I woke. I considered whether or not to remove the guitar from my wall, excavating the song’s chord structure from my sleep. The tears I wept, hollow-chested and heavy-limbed, cascaded into reality, like watching the ripped remains of matter spewing from the other side of a black hole. Because the truth is, I fucking miss you.

You were the whole of my youth, my adolescence. I would pray like you said to, you would stir my soul with mystery and revelation, wisdom and understanding. The elders prayed over me at 13. Never look to man, they said, because man would always disappoint me. Keep my eyes on you and you alone. They said the devil would shoot fiery arrows at me my whole life, but you’d protect me.

And the devil did speak. From pulpits he decried the extent of your grace and compassion. And I, if I truly believed, was to revile and denounce so-called abominations that the world fell victim to. Despite your freedom, I put on chains. He criticized the expectation of your power and presence. Miracles became blasphemous. Mystery was ignorance. You were the light, but I only saw darkness.

He spoke from behind the desks of those who said they knew you better, were closer to you. As if my relationship with you was a thing to be measured and scrutinized like the subject of a clinical trial. Charisma was favored over personal experience. Could I preach a three-point sermon? Was the inflection in my voice enough to evoke an emotional response? How many bodies could I bring into the room? When was the last time I jerked off? Who was I fantasizing about? Did I touch her before she wore a ring? Was I drinking in public or at home? Did I cause someone to stumble with my secret sins?

My questioning and challenging their teaching, the methodology, blacklisted me. It seems as though you’re a flash in the pan, they told me. This isn’t working out, they said. You’re not a strong enough spiritual leader, she said. Whatever the hell that even meant.

The devil’s voice grew louder, silencing yours. I quit listening to you both. I chose my own voice. Of my anger, my disappointment and disillusionment. You became a distant memory, a nightmare, a gravesite.

I watched as those who believed they knew you better ended up knowing nothing of you and even less of themselves. Their egos crucified their missions. They vacated their callings, falling from their pedestals. Some by choice, others by force. I’d be lying if I told you I didn’t find some restitution in it. One friend, who stood witness to my eventual dismissal of faith, said to me, You were the one they said would go nowhere and do nothing, look where you’re at now, how well you’re doing! And where the fuck are they? Their names are forgotten, reputations buried. Maybe I’m wrong for that. Maybe you reap what you sow. Maybe it doesn’t matter.

The seat belongs to you and, whether I like it or not, no one else is capable of occupying that space.

I’ve been sitting here for so long.

D.T. Robbins is a writer living in Rancho Cucamonga, California. His stories have appeared in Hobart, Spelk, Bending Genres, Ghost City Review, and others. He’s editor of Rejection Letters. Sometimes he tweets at @dt_robbins and it could be worse. 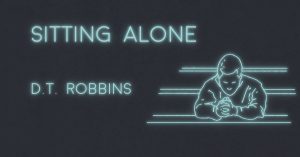