I remove them at irregular intervals, when I’m in public by a trash can and I don’t know anybody there I move to a new one for each different wrapper so a stranger won’t know how much I ate in one sitting not to feel angry

I think there should be more women in comedy

I don’t know when I learned to bond over insecurity and forgot how to bond over anything else. Confident people have something I don’t understand and can’t relate to and I want to learn but I’m afraid to, afraid that if I spend too much time with them I’ll see how much I want that

It didn’t feel sneaky in a fun way

It made me feel worse

He made eggs the next morning with onions

I love eggs with onions

I miss when my sexuality was all my own accidental performances

And we laughed the whole way through

Because everything was funny and nothing was uncomfortable

And that was all that mattered

Emma Howard is a writer and theatre artist who recently escaped NYC and made it to Baltimore. Their favorite writing topics include snacking, depression, Stockholm syndrome, gangrene, and the cruise ship industry. You can read their blog at belaborthepoint.guru and their manic twitter thoughts @humanlayingeggs. 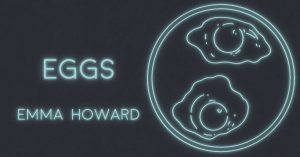 Read Next: SOMEPLACE ELSE by Emma Stough