You are the one who goes back for the remaining Christmas presents  while the rest of the family hugs in puffy coats by the doorway. The straps on the duffel bags pulled from the trunk of the car are rough and chilled. When you come inside, everyone is already seated around the fireplace or in the kitchen.

They ask a smiling question or two, then the conversation floats  to the other side of the room. The dog—it’s a golden retriever; it used to be a Schnauzer—stretches and walks over looking for attention and reassurance. You pour a glass of Coke, then sit back and listen. When you stop petting the dog’s head, it strokes sharp nails against your knee and looks you in the eye until you start petting it again. No one exactly blames you for moving to another continent.

It’s really great that you get to see so much of the world, they often say to you. Can you get peanut butter there? What about taxes? You do like your quiet routines in foreign places, the picnics by the river when your small, glassy apartment gets too hot. One of your favorite things to do wherever you find yourself is walk around and look at stuff; Spazierengehen the Germans call it. It’s hard to explain precisely, and you’ve stopped trying. Much of what you do is seen as nice and interesting  in a mild, ill-defined way.

And yet they keep wondering why France or Lebanon doesn’t have one of their own who can do what you do. And maybe you programmed wind turbine software in Hokkaido for a year, but Hokkaido doesn’t fully exist until your in-laws’ wealthy, adventurous friends visit there and write a long Facebook post about it. No one goes where they go. That’s the consensus in the room.

When you had an appendectomy in Ankara, you spent one night in the hospital. The air conditioning was broken and the grandson of the jaundiced  man sleeping next to you fanned him with a bath towel. You remember the flutter, snap, and air reaching you. When your sister or her neighbor or your aunt had an appendectomy in Akron, she got some kind of allergic rash where they stuck her with  the IV and the doctors couldn’t figure it out. They had never seen anything quite like it and wanted to keep her in the hospital for another night but the insurance company was being a pain in the ass,  so she had to call them herself for approval and they put her on hold for an hour. There is a chattering urgency about their lives that always seems to be in the process of being reported. This kind of detail is no longer  available to you—at least not when you’re here.

When your mother dies, you live farthest away and grief mixes with jet lag throughout your week back in Baltimore or Pocatello. The other mourners standing around platters at the reception form tight circles, and for a few seconds, you look at the blouses and jackets of your siblings or cousins. You walk to the circle and place your hand on the back of an elbow that, for a moment, neither pulls away nor moves to let you enter.

When you help put an extra leaf on the sturdy oak dining room table before the meal,  your in-law or cousin or uncle finds the latch under the table before you do. You know where it is, you just needed a moment to find it, like the moment it takes to locate the wiper control on the rental car before you pull away from the airport after a long-haul flight and drive here, passing your old high school and the new movie theater before turning off the state highway.

But sometimes, the same or another in-law or cousin or uncle lets you briefly into the tension he has with someone else in the house today.   He sighs, tilts his head, mutters, “She really should think about that the next time she. . .” Ancient radiators ping against the muffled laughter of a story being told in another room. You know better than to take sides, and, besides, you no longer have the right to take sides. Even showing concern feels like a violation of some kind of agreement you should have accepted when you decided to renew your contract in Norway or Hong Kong. The revelation closes, and the table pinches against the added leaf. He doesn’t say anything else. It’s only a little while longer to dinner.

You aren’t the black sheep, the troublemaker, the failure. You aren’t a scapegoat exactly. Animated feelings are directed toward these people.  These uncles and sisters don’t even need to show up to have these emotions aimed at them. Listen, they are being talked about right now. You genuinely try to show up at least once a year.

You didn’t mean to be condescending about their overscheduling, helicopter parenting, multiple cars, politics or whatever. Different versions of the same things, you’ve discovered, happen in most places anyway.  And, if you brought any of this up or tried to clarify further what you were really trying to say, they might even agree with you, then tell you about a plan that has already been made: We are going out for ice cream! Save the date for the wedding! We’ve rented a cabin; maybe you can come this summer.

You scoot forward on the couch and clear your throat. You might have something to say, something that would surprise them because it is neither exotic nor judgmental.  It’s really quite ordinary. Maybe an ailment or complaint about telemarketers—yes, they have these over there too—but the dog, their damned dog, wedges its muzzle between your knees.

The thing is you don’t really have something to say, just a jello-ish, passing desire to do so.  You bite on a cheese covered Triscuit and slouch back silently against the couch. You’ve left some crumbs on the dog’s slightly oily muzzle, but no one else has noticed, including the dog.    She’s just glad that you’re here.

Dan Shiffman is a secondary English teacher at the International School of Hamburg.  He previously taught in Uzbekistan,  Japan and the US. His creative work has appeared in  The Chariton Review,  Hobart, Literary Orphans, and Abstract Magazine. Dan also recently published College Bound: The Pursuit of Education in American-Jewish Literature (SUNY Press). 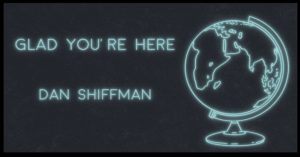 Read Next: OLIVER by Kevin Maloney