hey courtney. where did you grow up? how does your history feed into songs we used to dance to? 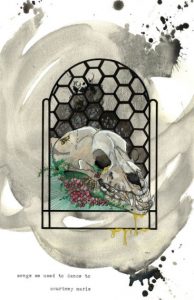 my family moved often when i was young. we lived in arizona, england, wisconsin, and new mexico. when i was fifteen i was sent to a lockdown facility for troubled youth in montana and when i got out eighteen months later i was relocated to texas and have been haphazardly making my way on my own ever since. i don’t feel like i have a place i can really call home but i have always longed for some sense of belonging, and i think this wistfulness influences a lot of my work. there are some pieces in this collection that especially speak to wandering, to feeling lost and out of place. there’s an undercurrent of longing for home, for family, for connection. there is sometimes a sensation of reaching out to take hold of something that isn’t there.

i wrote this collection not fully aware i was writing it. i was chipping away a little at a time on my typewriter and it often felt like going nowhere. i was all over the place while working on this book, experiencing some of my highest highs and lowest lows. for a long time, i was very unwell and untreated/unmedicated until i couldn’t not be anymore. while writing these poems, i thought a lot about illness, i thought a lot about how in many ways the world is sick, too. i thought about memory and trauma and how we become who we are. i thought a lot about the people i love, the connections we make and break. i dreamed about a better world for everyone. & i wrote about all of it, while in the thick of it. it took some time, but eventually the stacks of paper that were accumulating on my desk became polished pieces, eventually those pieces came together to create a cohesive body of work. the concepts and themes wrote themselves into the book simply through what i was experiencing in my life, from heartbreak to protests to trauma to sickness. even the pandemic found its way into the last chapters. the hardest part was finding meaning in the mess, and i’m so proud of how it eventually came together.

many of the poems are connected by a dialogue with ‘my ghost.’ could you elaborate on your relationship to, and the genesis of, ‘my ghost,’ and perhaps mention why you chose to use this technique as a device?

among other challenges, i live with bipolar disorder and i wanted to include this experience somewhat prominently in the book. when i needed a way to describe what it’s like to be ill, and especially manic, my ghost appeared. she’s strong-willed and confident and fun and unpredictable and dangerous. she is and is not a part of me. no one else can see her, but i know she’s there. it’s like being haunted. throughout the book my ghost is both a friend and a liability, and when she goes missing (spoilers), it’s almost just as disorienting as when she is present.

a theme that runs through the collection is that of a planet out of control, seemingly breaking down, and a generation born into a world heading towards cataclysm. there is a sense of stasis, of impotence. how did you go about incorporating this?

the climate crisis has always inspired a great deal of anxiety and guilt for me. i remember watching science programs as a kid and learning about the limited resources we have on this planet, that earth only has X more years until X crisis, that the rainforests are disappearing, that the coral reefs are dying, and so on. i was mortified that no one seemed to care about it. i’ve been mortified for decades now, and it’s only natural that it is expressed in my work. when people ask what my book is about i tell them it is about falling apart while the world also falls apart. i wanted there to be a kind of harmony in communicating the disasters we face on personal and collective levels. i wanted to inspire the terror of it all, in hopes that we might work to change things, to imagine a different future for ourselves and the world.

you use repetition to convey a range of emotions and ideas. i’m thinking particularly of the pieces placed intermittently throughout the collection which are all caps and repeat a set of words over and over. can you talk about your intention for these pieces and your use of repetition in general?

when unwell, i suffer from very invasive thoughts that often manifest as reoccurring words or phrases. each of the section breaks that you reference are things that have been stuck in my head at some point or another while working on the book, and the poems within each section spill out of these breaks and elaborate on their meaning.

at the forefront of the collection is environmental catastrophe, which takes on the character of a monstrous force, ever-present and overwhelming. a frequent motif returned to is that of burning: a burning world, or burning emotion. how do you approach the inclusion of recurring elements?

i wanted to draw parallels between all the ways things break down over time. feelings, memories, relationships, places. burning, which can be destructive or regenerative, passion or pain. anxiety in the approach of inevitable collapse. i wanted there to be threads through the book that connect the poems to each other, and setting poems on fire seemed one way to do that.

a striking continuity is the subject of feeling unseen, a sense of being in an in-between state, lostness, at points to a dissociative level. where does this observation come from? could you talk about how these states relate to the poems and the collection as a whole?

i think that the lostness and dissociation you describe speaks to the complex experience of memory i wanted to get across in the book. there’s a lot of trauma in and around these poems, there’s a lot of things that don’t want to be remembered or refuse to be forgotten. there’s both good and bad memories replayed to tatters, there’s the questioning of one’s own experiences, there’s the desire to manipulate time and change the course of events, there’s all the things we do to cope/survive/keep moving. some very heavy personal moments made their way into this book, and it was my hope that my vulnerability would be recognized by others who have gone through hell and back, and that they would know they aren’t alone.

there are some beautiful, frightening, and wistful references to the natural world in the collection. some of the reflections on nature are melancholy and dreamlike. what is your relationship to nature?

i am most myself surrounded by nature, whether in the forest, the desert, the mountains. when i am overwhelmed, it helps me to return to the natural world and be reminded that i am small but part of something very big.

throughout the collection there repeats a type of longing for a stolen reality, a ghostly timeline that is unfulfilled, where at some point in the past time forked away from a better existence. have you ever seen a ghost?

i have not seen a ghost, but i have felt like a ghost before: i went to a party once where everyone thought i’d been dead for two years. it was like existing in two timelines at once. it was deeply unsettling and i got very drunk.

what are your feelings towards the collection at this point? has anything changed between now and the time you composed the pieces for it?

while i’m still very excited about it, i get nervous the closer we are to releasing the book simply because of how deeply vulnerable it is. i thought i was prepared for friends and strangers to be able to glimpse some of my innermost thoughts, but sometimes i get a wave of anxiety: is it too much? am i too much? i worry about this in almost any situation so i suppose it’s only natural it comes up now.

what would be on your playlist for songs we used to dance to at a party to mark the end of the world?

there would probably be a lot of crying and slow dancing (hugging?) at the party, so i’d set the mood accordingly. i’ve actually been putting together a playlist to pair with the book, which includes:

courtney marie is a writer & artist based in denton, texas. they are the author of don't get your hopes up (2018, Thoughtcrime Press) and songs we used to dance to (2022, Goliad Media). their work has appeared in Nat Brut, The Boiler, Thimble Literary Magazine, and beyond. cm enjoys making weird & sentimental art with/for their community, exploring the world, and playing pinball. they live with three cats, cry all the time, and are forever writing letters & sending snail mail in a desperate attempt to connect with the outside world. they are the co-founder & director of the artist collective spiderweb salon.

Read Next: JANICE LEE in conversation with VI KHI NAO