JEWEL OF THE DELTA by Noemi Martinez

Once called the jewel of the delta, Delta Lake is a tiny man made reservoir where poor families would go and eat in the 80s, claim a table to have lunch or a picnic on the sand and have Easter Sunday cookouts. You’d get there by driving out towards Edcouch, a lonely stretch of a curvy road, tiny and desolate as far as roads go down here. Mom would take us some weekends when the truck was working and there was gas in the tank. As a treat, she’d say, “Pack the cheese sandwiches.”

I couldn’t drive on expressways on my own until I was 25. I had this fear my car would veer off the side. It was the 281 exit going towards Edinburg I couldn’t bring myself to get on, no matter how hard I tried. I was superstitious about it. I couldn’t try on Sundays. I couldn’t try with the radio on. I couldn’t try because someone did a hex on me. I couldn’t do it because I had a susto when I was 17, driving to Florida with my mom. Her dad was dying and I helped drive. I took the wheel while she slept and it was the rainy season. Now I sometimes wake up from dreams where I’ve fallen off tiny roads, and off I go, towards nothingness. The curves of roads in my dreams never change, they get tiny and nothingness overflows.

One Sunday after church, we packed the sandwiches and she said, “Let’s go to the lake.” We didn’t tell our dad, he never wanted to go with us anyways. It was mundano, too worldly I guess to want to be out when sinners who were also enjoying themselves under the hot sweaty sun. My mom turned on her Motown classic tape on the deck, which my dad definitely thought was mundane. Hell, if we’re winning, let’s go all the way.

This one Sunday, the road kept curving and curving and it seemed like we got lost. The more she drove, the tinier the road got. I wished maybe we’d be transmuted to another world. It wouldn’t be the first time I’d wish, in driving, we’d be found in salvation.

This one is different. In this dream, I am mad, but then I become water and disintegrate. I cease to exist and crash into waves of water, right there on the chair.

For the short time, when Mom was in hospice after I found her, I’d have dreams I was so angry that I couldn’t speak. I’d wake up with my heart racing, my blood boiling, my throat a hot stone. My anger boiling and seeping into the night.

That night I told Mom it was fine, she could leave. It rained so hard and violently, a cold front had come into the valley the night before driving the temperature close to freezing. The wind shook my car across the expressway and I inched my way back home. The wind and rain crashed down, and I knew. I knew. I had stayed as long as I could. The roads by then were lonely. It was almost Thanksgiving break. I never saw another car out there. It’s like those times when you’re driving by yourself and the world seems eerily empty and still. The earth was not still that night.

I had played Mom’s favorite Aretha songs. I had touched her legs. I held her hands more than I had ever in all my life. The day she left, the earth shook and the heavens brought down the rain. Maybe, I like to think, her Despedida surrounded by water was like her arrival surrounded by water.

Noemi Martinez is a 1st gen boricua/Chicana queer femme crip poet-curanderx writer, mixed media artist and cultural worker living in the militarized borderlands of the Rio Grande Valley. Some of her work has been featured in Doubleback Review, Resistance and Hope: Essays by Disabled People, Rest for Resistance, Bitch, The Deaf Poets Society, Revolutionary Mothering: Love on the Front Lines and Stirring: A Literary  collection. They are the assistant managing editor at Raising Mothers and send tweets into the abyss at @hermanaresist. 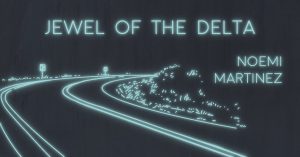 Read Next: SO COME BACK, I AM WAITING by Marston Hefner