My college friend asked me out for drinks and named a bar equidistant to our offices and apartments. The last time I went there a dentist had hit on me with his Argentinian friend who claimed he worked for the CIA. The time before that I’d fainted on the sidewalk during a first date, it was the best date of my life. Arriving at the bar, I felt as though I was returning to the dumping ground of a dead body, coming back to touch his hair and maybe sit on his rotting face.

In a dream I felt I knew he was the one because he presented to me a pair of beautiful pink shoes and then proceeded to eat them—peeling them apart like sliced lox, wetting his face.

Men are always asking me if I’ve just made a sound.

I know a relationship is over when I am lent books.

He had raped his ex-fiancé and that wasn’t even a deal breaker on the first date, or the fourteenth.

I watched the men fighting on the screen and then the faces of the spectators beside me, all betraying a humorous indifference. And my date, I couldn’t look at him. Goosebumps came in waves and I shuddered, realizing that tonight he would beat the shit out of me in bed.

I said, I don’t know how to feel, I am a cold corpse. She said, Try acupuncture.

Somebody using Foley’s photo on a dating app—or it looks just like him, or I can’t tell—so I reverse Google-image-search the photo and swipe right and pray for a miracle.

Two men who know each other have said the same strange thing to me in bed, but I will not repeat it here.

By the time I got out of the shower he had prepared himself breakfast and was bent over his laptop. He felt safe in there, like a small, dirty, white dog, loved too much by someone, constantly at risk of rupturing and spilling his guts everywhere. Himself, neither filthy nor unhealthy, but his mind, his character, threatening uncanny flaccid explosion.

I’m annoyed when men I date or sleep with tell me that I have a cruel undertone or that I seem annoyed with everything they say or do. But I am truly disturbed to hear from a man that I am seeing now that I am kind, too kind and understanding, confirming my own worst fears and beliefs.

There is a kind of truth: I can tell a man that domestic violence spikes on the day of the Super Bowl and they nod and say, Oh. It does not matter if this is factually true because it is another kind of truth, one that is substantiated by the man’s reluctance to be moved.

He had escaped his head—it was an optimistic meditation on rebirth. I’m not so concerned with his head, but when it does enter my mind it is peeking out from between my legs dripping in more ways than one.

You know what is triter than a dream? Saying that dreams are uninteresting. I swear to god if you don’t take your hand off of your dick I am going to cut it off.

It isn’t about war—it’s about exhuming a dead man’s dick.

If you knock on anything long enough, it will become a door. I was specifically not expecting you.

I like not having a steady boyfriend because it means I have to carry less in my purse.

Manufacturing faith, manufacturing emotions. The best time to break someone is during the Christmas season.

He didn’t even come that night; I think he was high on cocaine. I didn’t mention to him that I’d had unprotected sex with three strange men earlier that month.

This was it. I’d been in the city long enough to be sitting in this bar with some guy, who loved this bar, the same bar where I met my ex years ago. The same restaurants, same haunts, all these guys liked the same drinks. And before my ex, I’d played pool in the back room with another ex, all three of these guys would grope me in the dark corners and pay for everything with cash.

I clutched my overly full stomach and let it come out in my skirt. I could appear believably three months pregnant.

At first I’d squinted to avoid the gory photos, but once the heat passed through my face I looked more closely at the series of tightly cropped video stills. While still alive, the face he assumed was disgusted—what other expression was there to have?

And the blade was so small. Not at all what I’d imagined. I thought a ‘beheading’ required a guillotine, a machete. That knife could have made it through TSA. He didn’t look like himself with his head shaved and his body in the wrong place.

In high school I published poems about the death of my brother. My favorite brother, my parents’ favorite. He called my mother from Iraq and she would cry for hours after their brief lovely talks. He never asked to speak with me and I was never mentioned. I’m so glad that my mother never took an interest in anything I did. If she had, the shitty poems would have tested our relationship.

I heard my brother’s voice as I remember it from the 9-1-1 calls on a news report that I’d watched online after a short ad for Sea World.

His shaved head looked filthy and the stuff came off on the palms of my hands. I asked, Do you want me to sit you up in the car? Do you want me to get someone? No words came to him. So I propped him up against his own rear wheel and went on.

A dead man’s doppelganger becomes undone by the hole in his pocket disappearing.

Looking at cell phone shame videos online of “Pervs Jerking-Off on the Subway.”

I told him I’d had a miscarriage. I didn’t say it was his, but I didn’t say it wasn’t. His horror more so reflected his fear of me than his pity. That I would have been pregnant, that I would have carried a child long enough to call what had happened a miscarriage, that’s what stole his color. He would never think to cross me again, to even talk about this with another single person. I’d stolen something from him and without consequence. In truth I’d never been pregnant in my life. And this moment amounted to a belief that it was impossible to become pregnant.

Before I could catch my breath he turned out the bedside lamp. He grasped me and began speaking with a tone that I’d never experienced before. His voice was round and his heavy arms held me to make the sounds travel all the way through me. He said, When I was in college my sister died. She moved south with her boyfriend because he was in the Army and he strangled her. That night I slept more deeply than I had in recent memory.

He took out a drawstring bag. You don’t want to know what’s in here, he said. I wasn’t frightened. I wasn’t anything. I couldn’t think or rather was resigned not to think. Then I looked, I focused on him, his arms. The way he held the bag away from his body, up at his eye level, was like he was greeting a baby.

I went downtown, down to my favorite neighborhood for shopping. I told myself that I had errands but really I was looking to indulge in a dress that I imagined I’d wear to the funeral of the man I was sleeping with. When I got out of the subway I checked my phone for the time and saw that he had texted me a vague message potentially threatening suicide. I doubt my pulse quickened because this had happened before.

There is nothing defining men from one another until one is severed from himself. I want you to carve out of me all the good stuff.

Then he sent me a picture of his erect penis looking dry and unappetizing in the flash. On it he had written my name with a black gel ballpoint, which was funny because my name means pool of sorrow. And I could imagine mere moments later that he’d produce from his own pen a splashy pool of sorrow, disappearing ink.

I printed out hundreds of copies of that photo on pre-addressed, stamped postcards and put one in every copy of his new book that I could find in lower Manhattan.

Do you remember when we were friends, I’m not sure we ever were.

The drink has an entire sprig of rosemary in it. Laughing, I say, I have no sense of humor about this. Laughing, my college friend recounts her break up.

“Do not fuck with a world sensation.”

Nora MacLeod is a writer living in Los Angeles. She lurks from @chanceinh3ll. 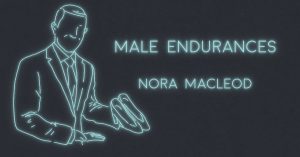 Read Next: HOME by Madeline Anthes