MY NONNA’S CURSE by Elizabeth Kattner

I have six impacted teeth. My mouth is overcrowded as the New York streets I wander. Too many people, not enough space. Life learns to grow upward. Skyscrapers. My teeth got the wrong message and push sideways.

I take two tablets of ibuprofen to dull the pain. My coworker offers something stronger. Vicodin from when he tore his ACL last spring. I cut one of the oblong pills in half. It’s dangerous, but I was born in Columbus, the epicenter of the opioid crisis. I know to exercise caution.

My coworker says I should get my wisdom teeth pulled. I ask him with what money. We work at the ass-end of Wall Street. Dental sure as hell ain’t covered here. He suggests cannabis, which is easier to find than health insurance. I remind him of our government piss tests.

He gives me the rest of his Vicodin. Six pills that I cut in half. We have a big make-or-break proposal coming up. This will get me through it. After that, maybe my Christmas bonus will cover a trip to the dentist. If not, I’ll do it myself. I’ve seen the videos. Slice open the gum and use a drill to remove bits of the jawbone. Next, shatter the tooth and pull it out piecemeal. Seems like a lot of work when a good punch will do it with far less effort.

I hide the pills under a spare menstrual pad I keep in my purse. It’s a trick I learned from my high school girlfriend. She kept Ritalin in a box marked “birth control.” The nun who was our homeroom teacher wouldn’t touch the box when she did bag searches. Catholic guilt has its uses.

She’s a doctor now, my ex. I saw her graduation photos on Facebook. Blonde and smiling with a new girlfriend on her arm. I wonder if she’s still selling pills and if she’d give me the old flame discount.

I rub my jaw. The pain gets worse after lunch. Maybe I should give up my salads with walnuts and dried strawberries and eat soup instead. Like my nonna did in the final days of her life when she was too weak to chew.

Only twenty-six and already becoming my nonna. Except she had ALS. That’s another thing my work won’t cover. Genetic testing. Insurance classifies it as “non-emergent” and I’m left wondering if this pain is the start of a much greater agony. A short life spent in the care of doctors like my ex. At that point, my impacted teeth would be the least of my problems.

I take another ibuprofen at the end of the day. My boss says I was productive today and to keep up the good work. I want to tell him any number of things I learned from my Italian grandmother. She supported the rise of Italy’s communist party in 1921. My impacted teeth might be her curse for becoming another cog in the corporate machine. She left Italy because of Stalin but capitalism was her real enemy. Vai a farti fottere. That’s what she’d tell my boss if she were still alive. Go and get fucked.

If only I had her courage.

I don’t. Instead, I’m am a good little cog who smiles and wishes my boss a nice night. The pleasantry makes my impacted teeth shift and grind against the roots of fully erupted ones. My nonna’s ghost rattles my bones and I bite my bottom lip hard enough to draw blood. I go home with my Vicodin hidden in my purse and try to make it through the month.

Elizabeth Kattner is a queer writer from Columbus, Ohio. By the time she figures out Twitter, she’ll have her MFA. Probably. If you ignore the mess, she can be reached by her email at agenteliza@gmail.com. 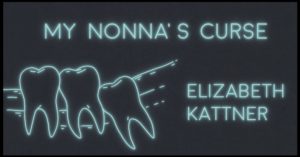 Jon Berger
AFTER A MONTH, WE MEET FOR DINNER by Francine Witte
RESCUE 60640 by Megan Carlson