This item is dedicated to the living memory of David Graff, a friend of this paper, who passed away this week in a manner very much unexpected to those who knew him well. David, who died Thursday, was born in Michigan to a family of middle income, attended the University of Chicago under dubious circumstances, failed out under less dubious ones, spent two years writing grants for legal nonprofits, discovered no dignity in the work, detested labor, detested snobbery, moved back to Detroit, fell in love, became engaged, took a job cleaning churches, saw the engagement end badly, saw his only love end badly, quit the churches, bought an outbound ticket, spent nearly five years living reckless across the ocean, did steady, unlucrative work in Morocco, bought a dog, gained a small reputation and a byline, broke his foot in Cambodia, got in over his head, saw a child dismembered by a landmine, acted badly and was jailed in Chile, elected finally to come home, took a job in Sioux City, detested phoniness, detested “small talk”, got a girl pregnant, paid for the abortion, buried the dog, quit drinking, broke three stories, learned to live with regret, moved to a major national publication, lived comfortably for two years, disdained politeness, disdained bosses, was bought out and left the paper, was hired and bought out again, cobbled together a National Magazine Award and a mortgage, had a heart attack, pivoted briefly to video, relapsed a year and got sober again, was contacted by and met with the abortion he’d thought he’d helped pay for, moved to New York City for work, got laid off again, sold the mortgage at a loss, reached out to his life’s only love, garnered no response, caught a job with a small paper writing obituaries, always was a joyful presence around the office, never was a burden to anyone, proved unable to shake a childhood loneliness, retired to his apartment one evening, wrote a small note in the parlance of his trade, drank a bottle of bleach sometime just before midnight, sat very still in his chair, thought briefly of all the words we use to explain a life, attained a sort of peace, and regretted only the bad parts.

Jesse Salvo’s short fiction has been featured in Barren Magazine, Pacifica Review, BULL, Tiny Molecules and Cowboy Jamboree. He is an editor and columnist at BULL. His first fiction manuscript is represented by Nordlyset Agency. he lives in Seville, Spain. 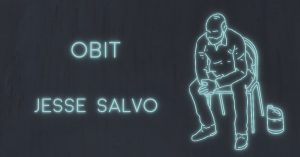 Read Next: WELCOME TO THE RECKONING by Omar Hussain