WHEN THE FIRST HUSBAND DIES YOUNG by Dan Brotzel

When your first husband dies young, you feel shock, you feel sick. You hurt, you bruise, you ache, you sting. You feel nothing at all but also everything, way too much. Reality has been swept from under you. There’s a big hole, a gap, where your life should be. Nothing makes sense. You’re trapped in a nightmare that can’t possibly be yours. Everything is panic, anxiety.

You keep running up against the hope that this is all an illusion, that soon you’ll be able to get your head round it, feel differently about it, send it away. You keep thinking you’re in a bad dream, or maybe even just a dream of a dream of a bad dream. You tell yourself you’ll unravel it all eventually and get back to normal.

When the first husband dies young, you feel like your future’s been stolen. You feel like you’ve entered on a chapter that wasn’t even supposed to be there in your book. You had a life, you had a roadmap, you had dreams. You had a sense of where things might go, a direction of travel. You had the shared destiny of each other.

He painted pictures of the future. He had it all scoped out. The vision–a lot of it came from him. But you went along with it. There was a certain muscularity to his mapping out of things. You liked this, at first. It involved you and only you, it made you feel that you’d been specially selected. You were part of a plan. You existed for something, for someone. Now he is gone, and you’re not sure where you are either.

When the first husband dies young, you notice how keen everyone else is to grieve on your behalf. From the outside it’s a story they can really get their heads around, a formulaic film plot: love’s young dream crushed, the brave one taken too young, a future stolen. To them, it all seems so clear, what’s happened and how bad it all is, where it all begins and ends. Whereas for you, it’s just a mess, it’s not even a feeling, it’s just a color that’s drained from the world. You wouldn’t even know where to start, how to define it, what box to put it in. You are the box.

People seem so taken with the exquisite agony of it all, they keep telling you how they feel your pain. But how can you? you think. I don’t even know how to feel it myself.

When the first husband dies young, you’re not thinking about moving on. But slowly you start to see that you’re suspended now in a solution of suffering, floating like a dissected rabbit in a formaldehyde tank for the world to pity. It’s a fate worse than death, you hear yourself think. Maybe you don’t want to be anything else right now, but you’d like to know you could try if you wanted. Otherwise you might as well be dead too.

When the first husband dies young, you quickly realize that you can never really say anything to anyone to suggest that things were ever less than perfect. Yet there are little things you start to remember, little niggles and judgments and tensions and frictions, things you don’t have in your life now.

Sometimes, when in-laws or relatives or friends of the deceased sing the praises of your late husband, you don’t quite recognize him. Or, when they call to mind a famous evening or memorable event with him, you recall something extra that they never saw: the row you had before the party, the resentment you carried all night, the savage alcoholic catch in his voice, the sullen resentful slurs, the punitive silences–yours and his–on the drive home. So now you have to nod and smile past your memory, as everyone looks to you to validate theirs.

When the first husband dies young, you find you can put clothes on and not have to wait for the inevitable assessment of your outfit. You can make a spontaneous plan to see someone that evening and not have to explain who they are and how you know them, or what time you’ll be back. You can do nothing–you don’t even have to say that you don’t feel like doing anything–you can just not do anything. You can mooch, you can putter, you can forget to get dressed or do your hair. You can browse Netflix or arrange your wardrobe or read a book or flick through some crappy celeb mag or plant some herbs out on the balcony or spend three hours making an onion soup, with some disposable plastic pop turned up loud that he would have hated.

There are occasions, on your own, never to be said to anyone else, in the darkest corners of the night or the quietest folds of a solitary day, when you dare to think that you prefer it like this.

When the first husband dies young, you realize he didn’t like you very much. It’s not really his fault; he probably didn’t like himself very much either. (His dad was no different.) He was, to use a phrase that he loved, “a man of the world,” whereas, you–poor sweet, dear you–you were so naive and hopeless that you needed saving from yourself. You had to have things explained to you, he explained–which was handy, because he liked nothing more than to explain things. He knew stuff, he was clever, and he was capable in many ways. But there was a price.

He liked everything his way. He knew what was best for you, much better than you ever could. He expected your tastes to be his tastes. He expected you to defer to him in the big decisions–he didn’t want you to go back to college, didn’t want you to carry on with that job, let alone go for that promotion. He was happy to go along with you being you, so far as that didn’t conflict with you being his. But he wasn’t really very kind and, contrary to all his assumptions, he wasn’t very funny.

You realize that you were afraid of him. You thank God that you never had any kids.

When the first husband dies young, you blame yourself. You survived him, and now–with no right of reply–you judge him. But you know you never wished him dead; you had this silly optimistic belief that everything would right itself in the end, that you would both find a way back to the early days when everything was perfect and hopeful.

When the first husband dies young, you find one day you are free to think your own thoughts and free to stop worrying about how others expect you to be. And you see at last your first husband’s great gift to you: the realization that there need never be a second.

Dan Brotzel’s first collection of short stories, Hotel du Jack, is published by Sandstone. He is also co-author of a comic novel, Kitten on a Fatberg, now available to pre-order at Unbound. He has Pushcart and BIFFY50 nominations. He won the 2019 Riptide Journal short story competition, was runner-up in the 2019 Leicester Writes contest, and was highly commended in the Manchester Writing School competition 2018. He has words in places like Pithead Chapel, Ellipsis, Tiny Molecules, Storgy, Reflex Fiction, Cabinet of Heed, Bending Genres and Spelk. 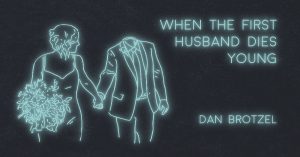