The piglet was pink, but not the regular pink that you expect piglets to be. This was the sort of glowing, warm pink that only exists in Disney movies. God, the little animal was so cute Yancy wanted to squeeze the thing to death. Wanted to squeeze it ‘til its head popped off its precious little body.

Yancy’s friends Tim and John think this too. He is so lucky, they think as they stand beside him wishing they could also have one. They’d all been on their way to the Riverwalk but now no longer care.

Yancy reaches out a hand and pets the piglet on its snout, which offers a high-pitched oink. This is right. Rightly right. He names the piglet Normand. Normand smiles. Normand’s smile is a demon’s smile. There is an air of danger about Normand, which only makes Yancy desire him more.

Yancy picks up Normand, thinking, My mother will like this piglet.

He looks over to his friend Tim who is tall and reminds Yancy of the bronze cowboys on the Riverwalk, the Briscoe. Stetson hatted. Rugged and loving life. There is a piglet that has appeared at his feet.

John, who is dashingly handsome and reminds Yancy of a younger version of himself, also looks down to find one.

This is strange. Yes, they admit that, but, their libidos are excited. They know a good thing when they see it, and they brace themselves, psychically, for what promises to be a considerable amount of sexual attention. Yancy looks at Tim. Tim looks at Yancy. They smile at one another. The attention, it seems, is already here.

How beauteous these piglets are. Oh, brave new world, Tim thinks, that has such creatures in it.

They take pictures and record videos of the piglets and post this on their many profiles. Tim names his piglet Worthington. Worthington, like Normand, has the grin of a hungry hobgoblin.

Yancy’s mother is a starchy woman who likes index funds, has a drooping heart, an aching soul, and a mood in constant need of cheering. Her name is Mildred.

“What a cute little piglet!” Mildred shouts when she sees Normand. She tries, very hard, to hide her jealousy which is a very ugly part of her that she rarely acknowledges.

Oh, and will you look at that. Mildred didn’t notice at first, but she has a piglet standing next to her as well, sniffing at her fern-green flats.

“Where did this little guy come from?” Mildred asks. “This is the cutest thing I have ever seen in my adult life. I will name him Weatherford. It looks like a Weatherford, don’t you think?” She, like Yancy and his friends, is also excited about the attention this will afford her, sexual and otherwise.

Mildred sends a picture of Weatherford to her friend, Francene. Francene sends Mildred a picture of her piglet, Hamlet. Hamlet, like Weatherford, is adorable yet also menacing.

It’s a profoundly joyous time, and they make sure to post this on their many profiles.

There are many questions about where the piglets came from and why they are here. These questions seem important but not as important as, say, actually having a piglet. The piglets are a mystery to be sure. Everyone agrees. They will investigate, of course. Of course they will. Later.

Yancy looks at his phone and wonders if this is a typo. If instead of ate, they meant @. ‘@John!’ makes more sense than ‘ate John’, but no. A photo is shared with a little adorable Arbuckle chewing on John’s foot, still in its classic western boot.

Everyone at John’s funeral who doesn’t have a piglet finds a piglet there. They are dangerous, these piglets, it cannot be denied, if only slightly, which just adds to their titillation. The funeral is like most funerals only more so in that it serves as both a celebration of life and a fracture in their interpersonal happiness along with flowers, drinks, and old friends.

The occasion is emotionally wrought. Everyone loves their piglet, but at the same time, they do not know if they can trust them. Tim looks at Yancy. Yancy looks at Tim. The death of their good friend has brought them closer than ever.

At first, Hamlet leaps up to Francene’s neck and takes a fleshy chunk out of her neck, right around where the carotid artery probably is.

The other piglets, seeing this, jump aboard this flesh lunch wagon and take what they can get. Muscle, bone, tendons, and teeth. When they are finished, there is nothing left. Everyone posts this on their many personal profiles.

Mildred takes out her phone and reports this to several organizations who make it their business to keep data on such things.

It seems to the mourners as if time stops and the whole scene freezes in tableau.

Yancy looks at Tim. Tim looks back. Suspended between them is an aerosol of terror, disgust, and desire.

The horror sharpens slowly, like the point of an icicle in early springtime, then everything begins to move again.

Tim pukes in the large clay pot of a Ficus benjamina. Several others join him. Many fear they will be eaten next. They inspect their piglets who oink at them dismissively, so dangerous and yet so cute.

Later, when they are still alive and uneaten, it becomes clear to everyone that their piglets will either eat them or they won’t.

Yancy could not get rid of Normand even if he wanted to. He puts him in a box outside at night and finds the piglet in his bed moments later. He leaves him hundreds of miles away in the Chihuahuan Desert and returns home to find Normand waiting on his porch.

Yancy sits down and reflects on these uncertain times. He wonders if he is in love with Tim. Tim does not wonder. Tim knows.

The two of them sit and drink coffee together.

“I want that piglet!” A voice shouts. It is strange to Yancy and Tim. People do not care that the piglets are dangerous. People, it seems, have complicated relationships with danger.

Yancy and Tim hold Worthington and Normand close. Across the street, there’s a group of people with no piglets and a single man who has one.

Yancy and Tim think there might be violence. You never can tell these days.

A drove of piglets runs up from off of E. César E. Chávez Blvd. Now, there are exactly enough piglets for everyone. Tim kneels down in front of Yancy.

Yancy calls his mother, Mildred, to see if she is still alive and unchewed.

Her smiling face appears on his phone with Weatherford in the background.

He is adorable. The threat of him, Yancy thinks, somehow adds to his appeal. He tells his mother that Tim has proposed. Life is too short, he says. He wants a Texas wedding.

Across the street, one of the new piglet owners is being devoured by his adoptive little pink package of joy.

Several of the other piglets join in on the meat buffet and blood sprays everywhere. The shock and smell of the wet, naked viscera send several observers to vomit into the gutter lining their side of the street.

Yancy turns his phone around so that his mother can watch. Mildred sends this information to the appropriate data collection agencies, then she congratulates Yancy and Tim. What a good couple they make.

The drift of piglets lets out a long whine. High pitched, like a host of porcine cicadas.

Tim records all of this on his phone, livestreaming to followers with similar interests.

Oh, how cute, they’re singing, Yancy thinks. Is there no end to their precious benefits?

These are interesting times. Uncertain, yes—destabilizing and frightening, of course—but interesting to be sure.

Another piglet begins to eat its new keeper. It starts at the leg. The screams that follow are uncanny.

“Yancy,” Mildred says, and Yancy turns his phone to face his mother. “I’m so happy,” she says, “for you, and that my Weatherford is a kind and gentle creature.”

“My Normand, too,” Yancy says, lifting the singing piglet up to nuzzle his neck. He is happy to be with Tim and Worthington.

“I cannot believe how many people have joined my livestream.”

“We should take one of those Lollipop carriages downtown.”

The gutter runs thick with retch and gore.

Saul Lemerond is a dyslexic writer who lives in Madison Indiana where he teaches creative writing at Hanover College. His book Kayfabe and Other Stories was published by One Wet Shoe Press in 2013 and can be found on Amazon. His short stories have appeared in Bourbon Peen, Gigantic Sequins, decomP, Five: 2: One Magazine, and elsewhere. You can find links to many of his stories at his website: saullemerond.com. You can also follow him on Twitter: @saullemerond. 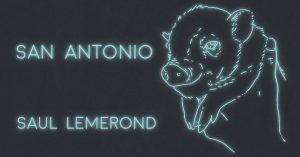