We were fifteen, our bodies slick with baby oil, as we tanned on her lawn in old beach chairs rusting at the edges. I was pouring flavored sugar down my throat when Julia told me the devil seduced my parents. The candy’s raspberry tang hit my soft palate, and I coughed a fine blue dust that tasted like medicine.

I knew her parents were evangelicals or born again or fundamentalists, all words I could say but didn’t understand. Her father wore jeans to church. The faded denim Wranglers rode high up his waist and tugged at his crotch.  His leather belt with a fat buckle was two-toned, gold and silver with a vacant-eyed Longhorn steer carved into the middle. He was an alcoholic until Jesus saved him, or that’s what people said. I spent a lot of time thinking about him. I spent a lot of time thinking about that belt.

My parents were getting a divorce.

“It’s the devil.” Julia removed the wrapping from a package of single-slice cheese. “My father said so.”

The waxy yellow square melted as she nibbled on it. We were starving. We were always starving at Julia’s house. Her mother had a pork shoulder locked away in the pressure cooker, but the refrigerator was nearly empty. A jug of iced tea and container of potato salad. Some salami and the cheese. A box of her mother’s Pinot Grigio dripping onto the glass shelf.

“Let’s go to my house,” I said. It was July, the middle of a stagnant afternoon in Ohio, gnats floating around our faces and flies landing on our forearms and toes, rubbing their legs together with no sense of urgency.

I ripped open two more paper straws of the candy, felt my mouth go hot and dry. Julia slid off her chair to take a drink of hose water. She was lean, all pale limbs with a pointy chin and something sly glinting at the edges of her eyes. I left without saying goodbye.

My mother had already moved to Massachusetts, where she had a new apartment on Beacon Street near Boston Common and a new husband named Rob. I was supposed to fly there at the end of August and start school at a private academy. Until then, I belonged to my dad, who worked as a prep cook at a nice restaurant in Toledo. He came home exhausted and reeking of the lemons and limes he sliced for the bar.

I didn’t agree with Julia’s father. Even at fifteen, I noticed a new weightlessness to my parents’ interactions, a buoyancy that arrived after they’d decided to separate. I could hear dad chuckling during his calls with my mother, a beer warming in his hand. He spoke kindly to her. They seemed happy again.

On the following Friday, Julia and I went to the pool. I rolled a beach towel and change of clothes into my backpack, zipped away all the accessories of womanhood I’d wanted until they arrived: tampons and pain killers; deodorant and blemish cream that burned my skin. We kicked and dove until our bodies ached with sun and sore muscles. We shared heaps of French fries Julia soaked in salt and vinegar. I phoned my dad to tell him I’d be spending the night as we walked back to Julia’s house. Our flip-flops kicked up dust from the gravel that hurt the soles of our feet.

Julia told me she loved me.

“As a friend,” she said. We were propped up against her twin bed, reading the movie times in the newspaper. Her parents didn’t allow television in the bedroom. “You’re the only person I can stand.”

Later, when I came back from her kitchen with two fudge pops and potato chips, she was leaning awkwardly against her closet. She kept chewing on her cheek and scrunching her toes together. I moved past her to fetch the pajamas in my backpack. Despite the heat, we opened the windows in her bedroom and watched pixelated movies on my phone using the neighbor’s Wi-Fi. We let the insects sing us to sleep.

On Saturday my father knocked on the bathroom door. I was going to a matinee with Julia. A horror film.

But my father canceled my plans.

“You’re coming with me, kiddo.” His arms were crossed, thick and hairy in a white t-shirt. He’d recently shaved. “Get dressed for the track.”

All of dad’s friends were gamblers. On weekends, they brunched and played twenty-one and bet on the horses at the casino two counties away. He’d never taken me with him until that humid afternoon, sweat pooling in the creases of my elbows.

“I don’t think you’re ready for Boston,” he said. His friends were luxuriating in the air-conditioning, but my father sat me down on the outdoor bleachers, the aluminum scorching my thighs. Everything reeked of manure and alcohol. “Tell me these are some sort of prescription I don’t know about.”

From his pocket he pulled a bag with four blue pills inside.

“I found them in your backpack,” he said.

They weren’t mine, but I knew immediately how they’d fallen into my possession.

An hour later, circling the food court, we saw Julia’s father. He was eating a hot dog, drinking from a plastic cup of clear liquid. Two limes. I told dad about Mr. Richardson’s comment. About the devil and the divorce.

On my way to the bathroom, Mr. Richardson found me. He called me darling and told me to forget about seeing him. For Julia’s sake. I thought about his daughter telling me she loved me, and imagined her slim fingers fidgeting inside my backpack.

“Are we clear?” Mr. Richardson asked.

He was wearing his belt buckle.

From his neck lifted the sweet smell of sweat, and booze.

In that slim, carpeted hallway, a swirl of blue patterns spiraling beneath me, Mr. Richardson leaned his body toward me, shifted to take a step.

I didn’t know what to say or where to move, so I just kept looking at his belt. The steer would not to return my gaze, its empty eyes refusing to bear witness.

Suzanne Grove is a graduate of the University of Pittsburgh and received the J. Stanton Carson Grant for Excellence in Writing while studying at Robert Morris University. Her poetry and fiction appear in The Adirondack Review, The Carolina Quarterly, Okay Donkey, The Penn Review, Porter House Review, Raleigh Review, Farrar, Straus, & Giroux’s Work in Progress website, and elsewhere. She currently serves as the short fiction editor for CRAFT literary magazine. You can find her @SuzanneGrove and www.SuzanneGrove.com. 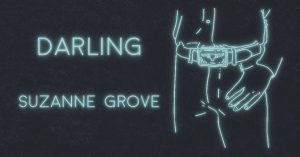 Read Next: THE PITS by Christopher X. Ryan