It might be June, or it might be July. I can no longer keep track of the days. It’s that halfway point of a Hong Kong summer, when the heat turns everything soupy. The days and nights run together, and the usual strictures of time and space begin to crumble. How long have I been with my British boyfriend? Long enough for him to have bought a new camera. He’s an avid photographer, one who’s always itching for a worthy subject to capture. One day he finds one: Let’s go off the beaten track, to Xinjiang, China’s westernmost province, to a remote lake called Tianchi, he says. He tells me what Tianchi means, but the way he pronounces it, it means something else. I don’t correct him. Maybe he knows my own tongue better than me. Maybe that’s why he often speaks for me.

My boyfriend hopes that Tianchi is so high in the mountains that nobody can breathe up there, that there won’t be any tourists. He dislikes an audience, and he never takes pictures of people with his expensive cameras, though he’s taken plenty of me. I am slightly less of a person than other people. One evening I tell him I’ve heard about a recent flare-up of violence in Xinjiang between members of its two main ethnic groups, Uyghurs and Han Chinese. Riots are breaking out. If things get bad, military will be called in. My boyfriend laughs. Maybe I’m being funny. Nothing to worry about, he says, and he should know. He wears suits to work and keeps Bloomberg blaring as he showers; he’s up-to-date. I like history and old houses. He is firmly in the present, while I am half in the past. Maybe I am his shadow. Maybe I should just stay close.

On our way to Xinjiang we have a layover in Guangdong. My boyfriend corners another couple to ask directions and they struggle to respond in English. I finally step in to help. I’m sorry, sometimes I forget that I have a voice, I say, and they smile. I’m being funny again. They warn us not to travel to Xinjiang, but when I translate this message for my boyfriend, he shakes it off like light rain. My parents ring my mobile as we wait for our connecting flight. Come home, please, don’t go with him, they beg me. I ask if they’ve heard about the unrest, the riots. They have not. The humidity in the airport is high. I lean my head on my boyfriend’s shoulder, feeling sweaty, slippery. Maybe I am melting into him. Maybe I am disappearing.

We land in Xinjiang’s capital city. We take a taxi to the hotel. Large groups of men prowl the streets, armed with bats and clubs and what look like chair legs. At the entrance to our hotel the staff is standing guard. We eat in the restaurant and I overhear guests at the next table whispering that there’s no Internet access, that the phone lines will be cut off. The food is buffet-style. Mostly noodles. The chef is busy guarding one of the doors with a knife. Later my boyfriend takes pictures from our room, panoramas of a suddenly silent city. Outside, it remains quiet for days and days, but inside, it is loud: The television volume on high. The shouting. The cursing. The breaking. And other times, his laughing. Maybe I’m just too funny. Maybe it is all my fault.

At last the tanks of the People’s Liberation Army roll into town. A curfew is imposed. Our lockdown ends. My boyfriend hates the idea of martial law, but I don’t mind. I don’t know what I’d do if I were completely free anyway. In fact, I can’t even remember what life was like before everything went quiet. My boyfriend and I make our way up to Tianchi, but there are plenty of tourists, large groups snapping pictures and hats flying off in the wind and old men hawking bottled water. My boyfriend is so frustrated that he cracks his own camera lens, but I’m glad we came. The lake is clear as a mirror.  There are no waves, not even a ripple. But this is only what people can see; there must be life beneath. I tell myself that maybe later it will show on the surface.

Kristen Loesch is an Asian-American writer and aspiring novelist. She placed runner-up in the 2019 Mslexia Short Story Competition and was most recently shortlisted for the Smokelong Quarterly Award for Flash Fiction 2020. She tweets @KShaoling. 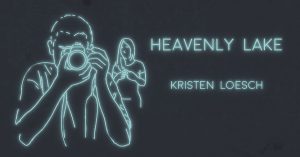 Read Next: LETTERS TO MACKENZIE by Blake L. Bell