Your refrigerator is yawning. It spills an egg-yellow rectangle on the floor. A ticking clock somewhere beyond. Then the fridge door closes and seals itself with a magnetic kiss. Plum dawn darkness washes in. You barefoot-shuffle through a current of cold air. Past your trash can and over some spilled coffee grounds that stick to your feet.

It starts in this good morning darkness. First, a warmth coming from below the floorboards. Not possible. This carriage house, which is more a renovated barn, was built in 1880. It has only earth beneath the floors. No basement, no crawl space, just a few inches of air above raw dirt.

Still, you imagine something like ashy coals buried in the dirt. Or a sliver of the sun broken off during an eclipse and warming the wood from below.

A few steps further and you feel the wood has begun to buckle. Uneven planks rising and falling. It’s warm when you press your hand to the undulating planks. You get on your knees, lower your face to a gap between planks, and sniff. Mildew and moth eggs. A dampness that reminds you of sheep.

The nail on Scott’s right index finger is gone. He’d brought over a crowbar and toolbox thirty minutes after you’d called. His wide nail bed indented like a peach’s gently sunken contour.

He taps the floorboards and listens. I’d like to see for myself what’s below.

You rub the floor with your thumb and tell him, There can’t be much more than dirt, and the warmth feels a little good.

Feels good, sure. But the wood’s unwell. Can’t fix what I don’t understand.

He lowers his head, palpates the warm wood planks like the floor’s an injured horse. You think he looks like the type of man who might heal horses. Let them nibble to health on his fingers. Eat away his nails for the keratin. Lick salt from his skin.

His eyes are still closed as a garbage truck rumbles into the alley outside your window, grabbing trash bins with pneumatic arms and shaking them upside down into its thrashing hopper. The noise fades into the distance and you know he’s listening for something below and that you shouldn’t speak, but you say, How would you do it?

Two hours later, he’s pulled up a six-foot by three-foot rectangle of planks.

Your hands are sore and tingling with small abrasions from helping him claw out dirt. Enough to pile up a chair-sized mound in the corner of your living room. He passes you a hammer, and the cool heft of it soothes your aching hands. Nail them down right where I’ve marked. Hard.

He crawls in with a flashlight against his chest. As you’re placing the boards on top of him, he tells you, And keep an eye on my tool box, I’ll need it when I get out.

How will I know when that’s gonna be?

I’ll knock five times in a row, like this. And he taps his flashlight five times against the warm wood.

You worry that a few of the nails felt like they’d sunk into flesh on the other side, but Scott doesn’t yelp or even remark, so you continue to cover him with the planks.

You sit for a long time looking at the uneven patch of wood. It feels good to know that a man with a missing fingernail is breathing the damp air beneath your floor.

After twenty-four hours, you ask Scott if he needs anything. He taps once, which, you presume, means nothing. You lay your head where you think his chest probably is and feel the warmth of the wood turn your ear cherry red.

Three weeks pass and the wood continues to warp. Eventually there’s a gap big enough to peer into. Scott’s right eye blinks in the dirty dark. You ask how it’s going and he doesn’t respond. Are you learning anything about the wood? A single knock from below.

You remind yourself that he’ll knock five times when he’s ready.

Over the next few months, a cold wind pulls all the leaves to the ground. The trees become a guttural growl, a loud jutting out of earth. They move through the sky, picking up bits of color, remembering cats that clung to their limbs by tiny claws.

You let a strong eggnog drip down to Scott at Christmas. He must get a little drunk because over the next several nights you hear something like a giggle rise from below.

In February your aunt dies. Then you get soft and wet with the flu. Your fever gets so high that you dream you’re an empanada without even closing your eyes. Feverish, naked, and confused by grief, you camp out on top of Scott in a pile of scratchy wool blankets. Although he says nothing, the floor feels good. It’s the warmth of a spring meadow where you’re shielded from the breeze by tall grasses all around you. The sun brushes warm nickels against your eyelids as a fluorescent orange lion licks at the back of your mind.

The ground below you hums with insects and reptiles and a breathing through the grasses. The ground knocks five times and you caress it. It knocks five times again and warm vibrations spill into your chest, stirring a current of cool, damp air that had settled in your legs.

Jason Fox is one of many Jason Foxes. He lives in Colorado. 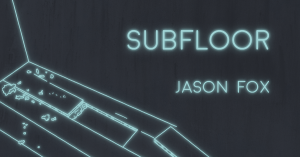 Read Next: THE FALL by Sara Lippmann

x-r-a-y magazine
CHEATER by Norris Eppes
I DIDN’T MEAN TO WRITE THIS. by Susan Rukeyser