This might come as a shock, but I think watching E.T. as a kid rewired my brain, changed my DNA, shaped my life’s path. I would rewind the ending over and over and just bawl my eyes out as the ship made a rainbow across the sky. I wasn’t just sad—it was joy as well. And I didn’t understand how I could have two feelings at the same time, and how this movie could do that to me.

Very often film is one of the ways we first come into contact with a world outside that of our direct experience. Which films introduced you to areas of life away from the familiar circumstances you grew up in?

I remember my dad showing me Sling Blade when it first came out. I was like ten or so. But it blew my mind. Wasn’t until I rewatched it earlier this year that I realized how much that movie affected me and shaped my human understanding. I’d never seen life like that, but it felt so familiar to where I grew up.

Gummo was one of the first films that felt really transgressive to me. I grew up watching movies like Freaked (1993), Stay Tuned (1992), UHF, Robin Hood: Men In Tights, etc.—which are commercial, but they’re weird as hell and therefore transgressive to a young mind. It wasn’t until high school that I got into Korine, Waters, Troma Films, Oldboy, Freddy Got Fingered… things like that. I was very much into cinema trash when I was in high school.

In terms of being secretive about watching films growing up, I never really felt the need to be secretive because my family was very much into watching movies. I was pretty much allowed to watch anything—when I could. My dad introduced me to John Waters.

Terminator 2, Bill and Ted’s Bogus Journey, the Indiana Jones series, The Blob, Tremors, Jurassic Park. I grew up with the big blockbusters and those definitely shaped my love of entertainment and film.

Can you talk about the influence film has had on your writing?

All my writing I see as scenes—the shots, people acting them out, the pacing. Without films, I don’t think I could write. I see a story as a cinematic arc that ends unfinished. I try to have the same plot-based conceit of a film, but then make it less about the plot and more about the people shackled to the plot. I feel like I’ve noticed this in Don DeLillo’s writing—a huge influence on me. He is cinematically driven and often shapes his novels around a plot conceit and then completely ignores that plot. I dunno… Maybe I’m just describing writing in general hahaha

Both. Sometimes I take scenes/ideas from movies and expand or adapt. Sometimes I put movies on and just let it play in the background and let the sounds and rhythms of the movie make waves in my brain.

What directors, film movements, or particular actors have been an influence?

Paul Thomas Anderson is easily my biggest influence. The Safdie Brothers a close second. Harmony Korine a not-so-far third. But they all present characters and situations—albiet in different constructions—that I think people aren’t used to seeing. They gently force us to acknowledge existences we tend to shy away from in productive ways.

Have you ever made a film? If so, has the process of doing that had an influence on your writing?

I’ve made numerous short films—never a feature. I’ve only scripted maybe one of those shorts. It used to be spontaneous, improv, random things that were cobbled together in the edit. This ended up being how I write too—allow for spontaneity and then adapt it in the edit. Make it work, because if my mind wants me to do it, then there’s clearly something I need to explore.

I, of course, have a micro-budget feature I’d love to film/direct—a nasty little one-location thing about a guy at a party where no one thinks he’s funny and all he wants to do is make one person laugh. Awkward, anxiety-inducing nightmare kind of movie. I’d do it tomorrow if I had the money and people.

Are there films you associate with a particular time in your life, or a specific writing project?

I watched Being There and Pee Wee’s Big Adventure a lot while writing my screenplay, Fix Daddy. Inherent Vice and Gilliam’s Brazil were on repeat while I wrote Sunflower. Paul Thomas Anderson films got me through a pretty bad emotional breakdown I had in my mid/late-twenties. I like to put on 90s action films while editing because they put me in a good mood and who the hell likes editing things?

California is infinitely cinematic. I used to work at a golf course and watch the sunrise every morning and that felt cinematic beyond anything. But I’ve never felt that anywhere I lived has been regularly depicted. I like to see places as anti-cinematic and show that aspect. Taking a place like Disneyland—constructed to be a magically cinematic place—and making it not at all like itself. More claustrophobic and grimey and unglamourous. Taking Hollywood and stripping it of the domestic tourism aspects. I probably answered this question totally wrong… Sorry.

Speed is something I rewatch pretty regularly—because it’s probably the greatest action movie of all time (tied with Die Hard with a Vengeance). Unforgiven, because it’s such a weird western. I’ve been watching Once Upon A Time In Hollywood a lot lately. I watch the Lone Wolf & Cub film series way too much. Frances Ha always puts me in a good mood. Saving Private Ryan is my most shameful guilty pleasure. I’m embarrassed to share it here, but… Oh well.

I saw a lot of random lines from the documentary American Movie—things either Mark Borchardt or Uncle Bill says. “I don’t have any dreams anymore” and “That’s senseless.”

The “No Blinking/Processing” scene from The Master. One might say it’s…masterful… sorry. The “give him the gun” jail scene in Unforgiven. The opening meta-scene of La Ronde is absolutely beautiful. But ask me this tomorrow and it’ll change. My mind always runs through scenes I love nearly constantly—and there’s a lot.

Uncut Gems—that was the last movie I saw in theaters. I never make audible noises in theaters, but so many times during that movie I found myself saying shit and oh god and stuff like that. And the ending had me jaw-dropped silent and I sat that way until the credits ended. A few other films are: Good Time, Umberto D., Naked Lunch, Kiarostami’s Close-Up, Saint Maud (2019), The Killing of a Chinese Bookie, and The Tree of Life. I’m having more visceral reactions to films as I get older. I cry a lot more now and I really enjoy it.

Gummo (yes, again), Magnolia, A Scanner Darkly, Birdman, Adaptation—and the list goes on and on. But those are some main ones.

Either my forthcoming novel Sunflower 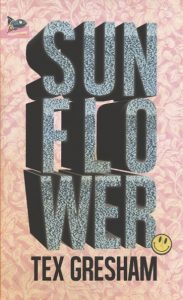 or a couple of short stories—“Lovebird,” “Violent Candy,” and “Hollywood & Vine.” Apart from “Lovebird” which is published at X-R-A-Y, all of these are unreleased and will be in my collection from Tolsun Books in 2023.

Tex Gresham is the author of Heck, Texas (Atlatl Press). His debut novel, Sunflower, will be published by Spaceboy Books in November 2021. His work has appeared in Hobart, The Pinch, The Normal School, and Rejection Letters, among other places. He's online at www.squeakypig.com and on Twitter as @thatsqueakypig. His dog wears a pink dress.

Read Next: DEREK MAINE on film with Rebecca Gransden