In sixth grade (1997), my friend Tom invited me to church because I was a heathen and poor. (We drifted when he got really into drugs later, but from ages 11 to 14, we were close.)

Because my mom worked—Dad vanished in 1990, returned for three days in 2014, and then vanished again—and I lived too far from school to ride the bus, what started as walking with Tom to church together on Wednesdays after school grew into going to Tom’s house weekdays until my mom got off work.

Tom and I practiced kickflips in the driveway for an hour, then listened to CKY or stared at the neighbor’s caged raccoon until I had to go. The rural Midwest hadn’t caught up with the rest of America yet.

Tom’s dad was unemployed but had money: Cool Dad. He sat around smoking cigarettes, and once a month got excited (stoned) and made toast, holing-out a “nest” in the crispy bread before frying an egg inside. His dad also slyly placed Playboys in plain sight. We managed to get a centerfold unglued long enough to look at it. Seventies-era. I was afraid and jealous of the body hair.

Most times, Tom’s dad was nowhere around.

During alternating weeks we went to Tom’s mom and stepdad’s. They had lives, so it sucked there more than at his dad’s. The two houses were night and day. No dirt-road skating there. No psychotic caged animals next door. But the similarity was the smell: like you ate an ashtray, vomited, and left a wet tea bag on top.

The only entertainment was the family’s Great Pyrenees repeatedly getting run over by cars. Every day we’d hunt for new skid marks in his rotten fur. And sometimes we found cool stuff in the woods, like antique Coca-Cola signs, or a rifle suspected in a murder. We were all alone.

Tom was normal. By living vicariously through him and his family’s resources, I convinced myself, against all evidence, that I was too.

I was shy concerning sex—both from church vitriol and rural existence best described as macabre. Forty-six kids in my graduating class, same since first grade. Meaning, classmates knew more about you than your parents, and there was no “other crowd” in which to hide. Hell for a sensitive introvert. Hate, judgement, bullying were amplified a million-fold. I wasn’t bisexual, so I only had a shot at half of them and still had to out-cool all the other boys.

Imagine. Muzak, halfhearted moans. Static. White noise. Like a movie theater ravaged by a magnitude 7.0 earthquake. Images frozen between frames. A black bar split the screen. Set it all in motion. Sliding up, diagonally, left. Sometimes a breast (?) or asscheek (?) scuttled past.

Horrified. On the edge of my seat. Was this normal? Is Tom “gay,” whatever that was? Was I gay? My pants grew uncomfortable in the low light.

On the porch, I sat, holding my head. Stared intently at the oak trees out front, dog bounding toward me as if hit by a landmine.

I was scared, alone, slightly aroused. I needed help. I was stuck in America’s Middling West, my mind craving answers that were just out of reach to questions unidentifiable.

Tyler Dempsey was a finalist in Glimmer Train and New Millennium Writings competitions. His work appears in Five:2:One Magazine, Buck Off Magazine, Wilderness House Literary Review, and The 3288 Review, among others. Find him on Twitter @tylercdempsey or here. 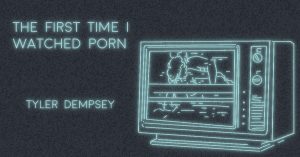