THE PAIN WE DON’T TALK ABOUT by Amina Frances

I was six years old when my mother strapped me into the buggy of her bicycle and steered us both into oncoming traffic on the stretch of road behind the Mulberry Street house. A teen driver swerved and clipped us at fifteen miles an hour. I’ve had a raging pain at the center of my back ever since.

Other than a hairline fracture on my thoracic vertebra—twelfth from the top—I walked away with a clean bill of health.

“Your mother is staying with a friend,” my father assured me on our drive home from the hospital. “She’ll come home soon. Don’t worry.” I didn’t.

I dream of my mother often. She’s wearing a wilted linen dress, traipsing barefoot through an enchanted forest. Her wild black hair is cropped at her shoulders. She still wears her wedding ring. Aunt May’s gold chain clings to her neck.

She never did come home. I was glad. I didn’t miss her. My father still goes looking for her in nearby towns on the weekends. I don’t miss him either.

I spent most of middle school flat on my back, my eyes glued to a popcorn ceiling, Nick at Nite and Growing Pains reruns blaring in the background. By thirteen, I was convinced that there was a village of Keebler elves tinkering away inside of me. Every now and again, they’d lose a hammer between my eyes or drop a nail in my rib cage. Clumsy little things.

Sometimes at night, I still hear the clanking in my ears. It’s been twenty-two years since the accident. The sound of tiny feet shuffling across my bones still comforts me.

I told my husband about the elves. He says that’s why I never sleep. He works at the hospital as an ultrasound technician. That’s how we met. That’s how I meet most people.

It’s just us two, for the most part, my husband and I. And the elves. And my college roommate, Maeve, on occasion. We live a thirty-minute drive from JFK. She says we keep her plane tickets cheap.

“It takes the same jaw force to bite through your pinkie finger as it does a medium sized carrot,” Maeve mentioned on her most recent pass through.

Later, I told my husband as much.

“How would you know?”

“Because Maeve’s not a doctor.”

I have trinkets from Maeve’s travels sprinkled throughout the house. They gather dust on bookshelves and mantles where pictures of small children should be, but aren’t. Rose quartz from Brazil, porcelain from France, a capsule of water from the Dead Sea.

Maeve grew up with an agoraphobe mother. Her father died when she was fifteen. Scars line the insides of her wrists—fleshy, pink orbs that look like stars when I squint. I study them when she sleeps.

I spotted the Big Dipper once, two inches shy of her elbow crease. I thought about asking if she’d done it on purpose. Imaginative little thing. But Maeve’s pain isn’t up for discussion. We talked about elves and loneliness and broken spines instead.

“I bet you could do it if you wanted to,” Maeve said the morning after our conversation about carrots and cannibalistic jaws.

“Bite through my pinkie?” I asked.

Maeve tucked a stray hair behind her ear. The rest of her flyaways were secured by a bandanna she’d swindled off of a market vendor in Morocco. She sat next to the window in her Carhart jeans and an open back sweater. The light struck her like a Renaissance painting—all bright whites and shadows. My eyes grazed over her ski-jump nose and her winding, elf-less spine. It was then that I decided I would bottle her up and absorb her, one flesh orb at a time.

Two months after Maeve left for a yoga retreat in Tibet, the elves worked up a storm. I was forced to quit my gig at the call center. My husband cut his shifts at the hospital. He says getting better is a full-time job.

At night, I hold on to Maeve’s rose quartz in one hand. I put my other hand in my mouth. My pinkie finger feels at home between my molars. Sometimes I stand there, staring at myself in the bathroom mirror for hours, waiting for the elves to stop working or my jaw to go slack. Whichever comes first.

Amina Frances grew up in Cincinnati, Ohio, reading many of her early stories to her extremely patient siblings and dogs. She later graduated from Amherst College and worked as an advertising strategist in Chicago for several years, before moving across the pond. She now lives in Switzerland with her husband, Matthew. Her work is forthcoming in PANK Magazine. 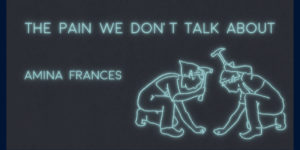 Read Next: BONES by Wilson Koewing