THE PROSPECTIVE, OR WHAT I TELL THE MAN IN THE CAFE by Sudha Balagopal

My parents sent me to the movies with a man they found in the matrimonial columns of the Mumbai newspaper. They told me he was a romantic, a Bollywood aficionado. Perfect for someone like me who read Austen. They made concessions for this prospective from America, sending me out with a man for the first time, alone, at age twenty-one.

My eyebrows stung—they’d been threaded and shaped into perfect crescents. The crimson on my nails and lips felt vulgar. I wanted to pull out the pins in my French braid, let my hair loose.

You ask to meet with me and you stare at your potato chips as if you don’t recall 1989. The snack bag of chips has spilt its contents on the table. Your hair is gray and the glasses outsize. I recognize the brand of jeans and shoes.

The Prospective purchased a movie-theater-sized sack of crispy potato wafers flavored with red chili powder. I politely declined when he offered to buy me one. We settled into our seats early, watched trailers for yet-to-be released movies and a series of product advertisements. A condom ad appeared on-screen; I averted my gaze, counted the the shiny buttons embedded on the outside seams of his jeans. I studied  his sneakers.They appeared gray in the theater’s light, not white. Two children is enough, an actress sang.

At the end of the evening the hired car driver who brought us to the theater took us back.

Questions thrummed in my head. The Prospective, in a post-celluloid trance, asked to be dropped off before me, blaming jetlag for his tiredness.

I thanked the driver when I got home, offered him a tip. The driver said the girl yesterday wasn’t as polite or as generous.

You ask to meet with me and you pulverize the chips with your fingers.

The Prospective’s parents called and said their son would like to marry me before he returned to America.

I asked my parents why a twenty-nine-year-old would choose me. What criteria did he use? Shouldn’t he have asked me what I wanted? I didn’t know what I wanted, did he know what he wanted? They said I asked too many questions, made wedding arrangements.

Six days later, The Prospective’s parents called to say he’d met this girl on a bus, “in true Bollywood style.” He married bus-girl on our wedding date.

You fold and refold the check the waitress has placed on the table. It disappears in your oily palm.

You asked to meet with me to talk about my son, twenty-two, still in college, and your daughter, a high-maintenance twenty-eight with a four-year-old child.

What do you think I’ll say?

Sudha Balagopal’s recent short fiction appears in Pidgeonholes, JMWW, Vestal Review and Nottingham Review among other journals. She is the author of a novel, A New Dawn. Her work has been nominated for the Pushcart Prize and Best Small Fictions and appears in the Wigleaf Top 50, 2019. More at www.sudhabalagopal.com. 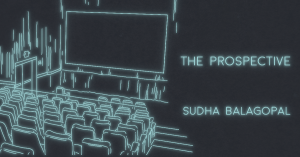 Read Next: OPEN TO AN OCEAN by Tommy Dean