THE SCHWINN by Rob Kaniuk

Mike showed up yelling and hollering about “the perfect gift” for Murph’s 40th birthday. He insisted everyone eat dinner and he’d give my dad his gift after we all had cake. Brylcreemed white hair, D.B. Cooper glasses, and one of his teeth, rimmed in gold, that twinkled when he smiled. It was a sly smile that was there whether he was handing me a butterscotch or crushing my hand purple in a handshake. He lived in a cabin, kept goats to maintain his lawn, and always had a paper bag filled with quarter sticks of dynamite.

Mike was nuts, but he was our nut and we loved seeing his white Ranger kicking up dust unannounced.

Since his crazy had been well established, and he talked about this gift very loudly while we all ate, a crowd followed him to the back of his truck.

He pulled out a brown grocery bag.

“Here you are, Murph,” he said, handing it to my dad with a touch of evil in his grin. “Happy birthday, from one Polack to another.”

My dad never said it, but he was afraid of Mike. He held the bag in front of everyone and couldn’t hide the look of inevitable embarrassment.

“You’re not getting out of this one.”

“Take it out, you nervous bastard–it ain’t gonna bite.”

Mike snatched the bag from my dad and poured it out on the tailgate. The goat’s head popped out first, then all four hooves. Mike roared laughing which made everyone else kinda laugh in support of his insanity. Murph laughed a what-the-fuck laugh, holding the head by a single horn, while my sister and I hid our faces and convulsed in quiet laughter at his inability to hide his discomfort.

“That’s Shoeless Joe. Broke his leg in a damn gopher hole yesterday, so I had to shoot ’im. Perfect timing, really. Saved me a few bucks on a case of Coors.”

“Say it ain’t so, Joe.” Murph backed away from his “perfect gift.”

“Robbie, Colleen, I got you something, too–” he said and slid the head aside and threw a hind leg for my dad to catch. He then grunted as he pulled a Schwinn out the back of his truck. The tire knocked the head of the goat on the ground. Mike grabbed it by the horn, put it back on the bloody tailgate.

It was a women’s model Schwinn with the low bar that looked like it survived the scrap drives during The War.

We thanked Mike for his gift, and he laughed a Camel-non-filtered laugh and squeezed my hand into submission.

The red clay cliffs at the edge of the campground were 30 to 40 feet above the beach at Elkview Shores. Every drop of rain washed a little bit of that clay into the Elk River. This left large canyons in places where the water funneled. One of the little canyons was right in front of my dad’s trailer. To fill the giant void, people threw large metallic trash items into the chasm. Lawnmowers, refrigerators, steel lawn furniture–anything that promoted rust and filled the hole. Once the trash started to wash down to the beach, they abandoned this approach and decided to grab shovels and go ‘Trailerpark Corps of Engineers” on the problem. All of this trial and error happened before I was born, so by the time Coleen and I were beating around the campgrounds, there were tons of rusted metal trash in the various points of erosion and a four foot mole-hill that ran parallel to the river. The mole-hill ran the whole length of the park and acted as a swale to guide the rainwater from the rest of the park to one area where it would drain through a pipe and into the river below.

I couldn’t tell you about that when I was growing up. All I knew was that we had a half-mile-long mound that was built for two things: laying on our backs at night to get lost in the stars, and for jumping our bikes during the day.

I’d ride the rusty Schwinn up and down that campground and ghost ride it into the bushes so the other kids didn’t think I took my post-war relic seriously. But I did. It was, as Mike said, a damn good machine. Everyone made fun of it, and they tried like hell to break it, but they couldn’t. Colleen and I tried, too. Even the older kids couldn’t break it, and they could break just about anything. Buried in sand, ridden half-submerged, sent riderless, flying over the levee countless times. It was the AK-47 of bicycles.

Crazy Mike’s Schwinn got respect in the end. After everyone else’s Huffys broke and got replaced, the crappy Schwinn was still around. If it was 30 pounds when we got it, it must’ve weighed a hundred when we were done from all the sand that found its way into the frame.

I like to think there’s still a kid riding it down the boat ramp into the water and he’s laughing. He and his friends can’t stop laughing about the rusty old women’s bike they found in the woods where the weirdos hang out. And they’ll never admit how damn cool that bike is. But they know.

Rob Kaniuk has been described as a dropout, a good for nothing junkie and a well rounded waste of potential. He works as a union carpenter in the Philadelphia area and his favorite past-time is sitting on the porch with his niece and nephew, telling stories. 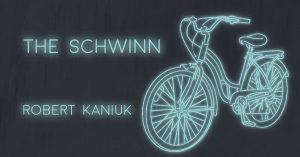 Read Next: THE BEEP by Jason Schwartzman