Once upon a time, something truly devastating lanced out of the sky and struck the protagonist, turning him into a tragic hero. He was dead and born again in an instant, a demigod with a one-line history of having killed his whole family in a madness borne of squabbles between gods. He went on to perform twelve labors beyond human capability. He married a new wife and ascended to Mt. Olympus, a god-immortal.

Or, once upon a time, there was a woman whom the earth swallowed. In fact, it may have swallowed a whole town, but then she climbed out of the chasm, and was awakened, a goddess all along, just asleep before, needed by the world in her new, better, more powerful form. And what of the town that fell into the chasm? It is only the backstory.

When suffering scraped me raw, did it empty me of something? Did golden, liquid power pour in to displace what was there? Did wings spring from my back, spreading wide from telephone pole to telephone pole, ready to bear me off on a quest? Did I become a weapon?

On our search for salvation, a psychic told us about Michael the Archangel. I knew about him, but had never really considered him before. We could call him Mike, she said, and talk to him anytime, driving in the car or wherever. I see him now, in a flash of lightning, brandishing his sword aloft, illuminated in the darkness—muscular chest and wings outspread, a face full of confidence and potency. Whenever he appears, an 80s power ballad plays—maybe “Holding Out for a Hero” or “Livin’ on a Prayer”—and other angels roll their eyes, but they secretly like it, and he has the goods to back it up. And maybe, now, I’m beside him, glowing golden with my own set of wings, filled with a power I only half recognize.

She also told us we’d live near the ocean one day. Maybe we will.

When the scans were bad—when each one, despite everything, showed a growing tumor, our current house seemed to me like it might be cursed.

Later, when he could get up from the couch without his legs giving out, when he was feeling better, it seemed to teem with life. Each garlic clove I bought from the supermarket sprouted immediately. The crocuses and paperwhites outside pushed through the stony ground ahead of schedule. I felt possibility running through all of us. I wondered if the green insistence of it would pulse within me and give us a miracle child. The child would be all our love, hope, and persistence—our future made manifest, a middle finger to cancer and all that came with it. What a terrible burden for a baby. But, no, it would not be that. It would be joyous. A whole life placed between us and death. A whole person more to love. The little person we dreamed of before, and have not quite given up.

I have dreams for us, but he is not back to normal, and life is not normal. The days are long and sometimes they require of me so much that there is nothing left at the end. My body is numb to feeling and touch. In the “Sleeping Beauty” story, when the whole kingdom went to sleep together, waiting for the prince, was it really a curse? Wouldn’t a shared sleep—one finally long enough to make up for the all the sleep that was eaten away by stress, children, and illness—wouldn’t it heal? It seems to me that if I could have a sleep like that—a long one, with all my loved ones asleep too—I might feel better.

Peace and danger are still at war in my life, and only a thin wall separates them. Things are better, but with any ping of my phone, with any change in medication, with a change in the cells of the brain, with a shift in scar tissue, a sudden swelling, with an illness caught by chance, with a tree falling through the night, with a car that slams into us without notice, the chasm could engulf our entire existence, and I don’t know who or what could crawl from the pit after that.

The apocalypse is happening around us all the time. Someone’s life, as they know it, is ending. With the spread of a virus that has hushed the world, many people are being swallowed by whales, now. The asteroids have fallen indiscriminately, the oceans have risen angrily, and the sun has died. I still feel the fear, and sometimes, it tightens around me like a boa constrictor, but I’ve had practice living with it. Sometimes, this seems like a superpower, and sometimes, it seems like a festering wound. I pray, and my prayers are not just for my family. The prayers are articulate hope, spoken against inarticulate dread.

To drown the dread, I go to the beach where my grandparents used to have a house overlooking the ocean. The cold wind climbs down my lungs. Now it’s the wall between me and my grandparents that feels paper-thin, and I sense them on the other side, can almost hear them, touch them. The ocean is there, and the sand. Something inside me loosens and warms, even in the cold. I can remember sleeping downstairs in their house, listening to the continuous speech of the waves and feeling comforted and afraid at the same time because of the imagination of childhood, that opens doors without being sure of closing them.

I take a pebble from the beach: smooth and cold in my palm. I bring it home to add to other talismans I’ve collected. I perform all the discreet magic I can to keep my family alive. We all do.

Emily Livingstone is a writer, teacher, mom, and partner to a kickass man trying to recover from brain cancer. Her work has appeared in Atticus Review, Gravel, Necessary Fiction, The Molotov Cocktail, Jellyfish Review, Cabinet of Heed, and others. She writes in Massachusetts in tweets @Emi_Livingstone. 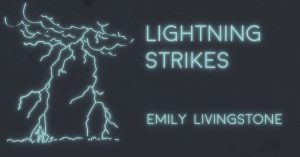