Caroljean Gavin’s work has appeared or is forthcoming from places such as Barrelhouse, Bending Genres, The Conium Review, and Pithead Chapel. Currently she is working on a novel, a story collection, and putting together/editing an anthology of short fiction based on the jokes of Mitch Hedberg. Find her on Twitter @caroljeangavin. 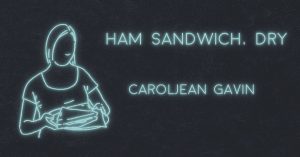 Read Next: FOOTNOTES by Erin Cork

x-r-a-y magazine
THE MOON IS SAD by Kyra Baldwin
A WEB, A TREE by Eileen Tomarchio