THE MOON IS SAD by Kyra Baldwin

See, the sun fucked the moon and the moon is sad now. The moon is already a depressive character because the moon is Vitamin-D deficient. The moon wanted to get a SAD lamp to remedy this, but the impassive physical laws of our universe said nuh-uh moon, because a SAD lamp in the sky would just look like another moon.

“There can’t be two moons,” they said.

“Why not? I’m loooonelyyyy,” replied the moon with comical sadness.

“Because we’ve already set the gravitational pull of Earth to just One Moon.”

“Does either Jupiter or Mars have life?”

“Nobody gets everything, Moon.”

And the impassive laws of the universe walked away, except they also stayed exactly there and didn’t change at all.

“But I don’t even get to experience life. Earth gets all the life,” sighed the Moon into the black void. There was no one to talk to.

Moon would talk to the stars, but the stars are all friends with the Sun. And Moon fucked the Sun and now they ignore each other. It happened just last year, in that odd 4 a.m. hour where the Moon and the Sun are equals in the sky. After billions of years, Sun looked at Moon in its harvest gown and thought Moon looks pretty good right now. And so the Sun fucked the Moon and came shooting stars. Ew. Sun made Moon laugh by describing what earth is like during the day. “Sweaty.”

The next day at 4 a.m., Moon waited restlessly for Sun to come back. So many people had already loved Moon and left (Neil Armstrong, Buzz Aldrin, Harrison Schmitt). Moon didn’t think it could take losing any more love. But when morning came up over Australia, Sun wouldn’t even look at Moon. Sun ignored Moon and just stared out at Sagittarius A. It wanted something bigger and sadder than Moon could ever be.

So that’s how the Moon and I got to talking. Moon said we look alike because my face is round and doleful too. I told Moon that it’d be really cool to control oceans and menstrual cycles. Moon shrugged and said it’d be cool to go in an ocean and have a menstrual cycle.

Kyra Baldwin has been published in McSweeney’s Internet Tendency, Reductress, and The Squawk Back. She was a  SmokeLong Quarterly Award for Flash Fiction Finalist. Find her on twitter @kyra_baldwin. 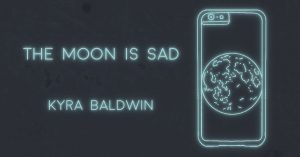