A WEB, A TREE by Eileen Tomarchio

Up close, they were groves, nebulae, Medusa’s head of snakes. Two ragged thatches, one on each of my mother’s outer thighs, a Rorschach pair. Seen in full only when I lifted her covers as she snored and lay beside her. By day, she had her ways of hiding them, fooling the eye. Let-out hems lengthened with ribbon, ricrac, lace. Concealer sticks and opaque hose in rainbows of flesh tones. Napkins over-draped on her lap at barbeques. Napkins that slid off after too many daiquiris like a magician’s reveal, my mother’s cue to rise by an invisible thread and tango with the breezes before my father dragged us home. As long as she slept, I could touch her at will. The thatches felt nubby, like the silk pillows she monogrammed for horse-farm wives. No name I could connect by penciled line to the hairless figures on my worksheets. Remnants, I guessed, from when humans still needed their appendix to digest apple seeds, their coccyx to keep from always falling to earth. They made me think of strange women in my dreams—ancient grandmothers, aunts and great-aunts who terrorized with hugs. They made me think of curses and bruises. I crayoned marks on my dolls’ legs and my own, certain I could draw out whatever buried shame my mother carried around and make it mine.

By my teens, they were everywhere. The backs of knees at checkouts, the flanks of ladies in visors at craft fairs. The noses and arches of my mother’s boyfriends who kept me company while she sewed sober enough at night to grow my college fund. Those days, she wore cut-offs and got tans and pined for old modesties. We’d knit legs on the couch and she’d trace them, my veinlets—scattered and ready to forest. In truth, I wanted a tally. I wanted to ask When? Since I couldn’t, I knocked her hand away, told her to keep it the fuck to herself. After the fourth in a six-pack, she was spouting, slurring: Never wait tables. Never cross your legs. Don’t sleep with your mouth open or they’ll crawl inside. Sometimes I volunteered to deliver Mom’s sewing jobs to the horse farm wives. Those women who never wore Sheer Elegance or knee-length anything or invited me inside as they wrote their checks against the posts of their porticos. At night, I dreamt of spiders spinning, seeding babies under my skin.

Years later, still single, I got tired of my concessions. The swim-skirts and sarongs packed for company retreats to beachfronts. A closet of midis, maxis, peasant frumpery from Dress Barn trying to pass as Free People. The procedure was out-of-pocket, a shallow priority of my pale-skinned cause. It was painless, surprisingly. Little needle pricks at splinter-depth. I imagined it as more a severing than a rooting out, soundless and slow-motioned as a felling before ground is struck. What I was left with seemed less like vanity than… what? Shamelessness? Whether one or the other, I didn’t know what to do with it, not at all. Will they come back? I asked the doctor. He said it’s always possible, that blood is stubborn. Sometimes in dreams, I’m with my mother in her last days when she couldn’t walk anymore, lifting her housedress to massage the pliant bark of her thighs, feeling a waft of cobwebs, the stone of her thatches’ gaze, my phantom daughter in the room somewhere, hating me.

Eileen Frankel Tomarchio works as a librarian in a small NJ suburb. Her writing appears in Longleaf Review, Pigeon Pages, Barrelhouse online, and is longlisted in the 2020 SmokeLong Quarterly Award for Flash Fiction. She holds an MFA from NYU Film. You can find her on Twitter at @eileentomarchio and Instagram at @gondaline26 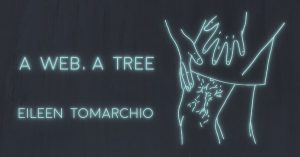 Read Next: WE ETERNAL BEINGS by Jody Sperling