Janice stopped at the back door when she heard footsteps behind her. She turned to see her husband in the kitchen doorway.

“Where are you sneaking off to?” Rob asked, one corner of his mouth upturned.

“Just getting a little fresh air.”

“Nope,” he protested. “This is your family. If I have to stay for Sober Thanksgiving, so do you.”

Janice sighed. “I wish everyone would stop calling it that. Like this is all a big joke.”

Rob slid onto a stool and plucked a leftover dinner roll from the plate that sat between the platter with the remains of the turkey carcass and the bowl that held her aunt’s not-so-famous sweet potatoes, only two polite scoops missing from it.

“You’re right.  I’m sorry,” Rob popped a hunk of the roll into his mouth.

Rob chewed the roll for a moment before reaching out his hand. When she slid her gloved hand into his, he pulled her close. “I believe she’s really trying,” he said.

Janice pulled back and looked him in the eye. “Didn’t you see her at dinner? How happy she looked? I thought she’d just float away; she looked so unburdened.”

Rob smoothed back the frizzies that had sprung loose from the twist Janice wore her hair in. “Your mother has never seemed all that burdened to me.”

Janice bit her bottom lip and looked out the kitchen window.  The snow was coming down harder.  “I saw a light in the treehouse,” she said.  “I think Doug’s hiding out there.”

“Probably for the best,” Janice sighed.

“Go on. I’ll save you the last piece of the apple cherry pie.”

Janice kissed her husband’s cheek and squeezed his hand once more.

Outside she turned her face upward to feel the snowflakes gather on her cheeks and eyelids. The chill soothed her. She made tracks to the big old oak that held the treehouse Steve had built for them the summer before he married their mother. Throughout their childhood, it had been a pirate ship, a castle, and a clubhouse. They’d read comic books up there and hid their most treasured possessions within its four walls.

Peeling off her gloves to get a better grip on the boards, Janice climbed up and poked her head through the opening in the treehouse floor. A light shone in her eyes.

“Jesus, Doug, are you trying to blind me?”

“Jan Jan,” Doug said. “Didn’t know who was invading my castle. Come to join the party?”

Janice pulled herself up through the opening and crawled on her hands and knees until she could sit leaning against the wall next to her big brother. “Are you drinking up here?”

“I thought you’d be glad that Mom quit drinking.”

Doug pulled a flask out of his coat pocket and took a swig. “I’m thrilled. But when I moved out, I swore I was done letting her ruin things.”

He offered her the flask. Janice took it but didn’t drink. “Com’ on. I thought we agreed that it would be easier if no one drank on the holidays this year.”

“Why should we make things easier for her?”  He eyed the flask.

“And then proceeded to spend the next few decades trying to ruin it? Is the irony of this Thanksgiving so totally lost on you?”

“I was kind of looking forward to a nice, normal holiday for once,” she admitted.

“Nice and normal.  That’s all you ever wanted.”

“It doesn’t exist. Like Santa Claus. Or sobriety. You and Rob though, that’s normal. That’s nice.”

“You could have that too. What happened with Lucy? She was sweet and smart. I liked her.”

“None of your business.” Doug reached over and removed the flask from Janice’s hand. “She was too pushy. Kind of like you actually.  Couldn’t date my sister.”

“She was worried about you, you mean?” Janice watched him take another swig from the flask.

“She worried about everything.”

“Did she ever worry about how much you drink?”

Janice sighed. She looped her arm through his and rested her head on his shoulder. She thought of the times they’d sat just like that when they were kids, when Steve would send them out of the house for a while on their mother’s worst days.

“Just, why now?” Doug said after a quiet moment. “Why now, right before the holidays? After all this time? After all the Thanksgivings her drinking ruined, she’s now ruining them by not drinking. Brilliant of her, really.”

After a moment, Janice said, “Maybe she just looked around and saw how alone she was.”

“Steve will never come back. He only stayed as long as he did for us.”

Janice shook her head. “When you love someone, you have a lot of second chances in you.”

“You believe she’s for real this time?” Doug asked.

She turned her head so she could see the snow falling. “If I don’t, who will?”.

The snow was accumulating, and the treehouse was getting colder. The moon shone down on the snow-covered yard, and she was just about to remark how pretty it was when the soft, secretive light of a candle began to glow in her mother’s room. She turned to see if Doug had noticed, but he’d closed his eyes and leaned his head back against the wall. She knew she should try to get him inside. Make him eat something. Make him some coffee. For the moment though, she sat next to him, and tried to put herself in his place, feel his pain, his compulsion to drown it, and asked herself what it would take.

Diane D. Gillette lives, writes, and teaches in Chicago.  Her work has appeared in over 50 literary venues including the Saturday Evening Post, Blackbird, Hobart, and the Maine Review.  You can find more of her published work at www.digillette.com. 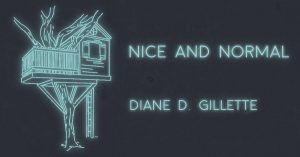 x-r-a-y magazine
A WEB, A TREE by Eileen Tomarchio
THE LIFE CYCLE OF TEMPORAL BIOMATTER ATTACHMENTS by Jemimah Wei