AT THE ANIMAL LEVEL by L Mari Harris

I was not born with this rage.

I don’t remember when it first entered me. (Yes, you do.)

Nor do I remember when I first realized everything I saw was faintly veiled in red: the city streets, the faces of people I passed by every day, my reflection in the mirror as I brushed my teeth. (Are you sure about that?)

Now, I drape this red rage over me like a hooded cape made of velvet and ermine. If I tuck my head just right inside the hood, I cannot see the trim of white that once scampered along a winter’s day. Isn’t that the point—to hide from pain and suffering? Me, I mean. Others, too. How red is tied to beginning, middle, and end: my birth, my shoe in the middle of a street, people gathered at a shocked distance, hands clasped over mouths, those same mouths that the night before tore at a medium rare steak on their plates (a death, but not my own).

Here’s more red for you, born of pain (the rage came later): The corner of Washington & 17th, July, year of our Lord 1993. You are silky soft, lapin-eyed, still smelling of country-girl little bluestem, cornstalk buildings cleaving clouds when you tilt your tender little head and sniff these city smells, concrete seizing heat you feel through new city-girl shoes. Even the grackles and Blue Jays are softer here, trounced by the grinding of delivery trucks and SUVs. This city is too new. Too much. Too, too, too many people panting mad in the heat. Noses twitching like alley rats. This city is too hot in its fur. This day’s dawn, a fabrication, rubicund, but this moment still honeyed, still pure as a cottontail. Until a predator—say a coyote or a man—appears from downwind. Run in those new city-girl shoes as fast as you can. Until you trip, and a tempest rolls in, hovering, heavy, smelling of rot, of sweat, of bile. Kick and claw and bite, throw out all you have. You have tried. No one can accuse you of not trying. Later, after you clean yourself up, relief. It could have been so much worse, such a deeper red.

(Reader, did you see distance is still needed in the retelling, all these years later?)

I will reframe my rage, tuck it between the pages of a book, bury it under a pillow, wrap it in a blanket, in another round of drinks. If depression is rage turned inward, what, then, do I call the simmering of avoidance? Is this why we’re attracted to fairy tales—because we understand what red signifies? —A forest, a copse of trees, a house with a plume of smoke drifting up from the chimney, an open door where more red is waiting to eat us up?

Let’s look at what is red:

I now see I forgot Love, but I’m not sure where it belongs.

For this one I will remain in first person. (I must own this one as my own doing.)

A July weekend, year of my Lord 2000 (what is it with July?—I have concluded it’s red heat, red fireworks, a hand on a boiling pot not watched). A pleasant man sits next to me. We introduce ourselves, talk of books and art, knock back a few shots with barbaric yawps that make the bartender laugh. Here’s red again, a warm flush head to toe (see: Passion, Hunger). A red truck I jump into (STOP). The bartender’s name is Leo. I’m sure red-truck guy told me his name, too, but all I see is Red Means GO. We drive deep into the forest, up the mountainside. I know this terrain well. We pull off onto a dirt service road I’ve passed many times but have never wandered down. It descends steeply, stops abruptly at a stream. My first thought is How beautiful. My second thought is Bears live here. The third thought doesn’t come until the next morning, after I’ve popped my sixth ibuprofen and prayed over the toilet. It doesn’t matter that red-truck guy was a lovely man. It doesn’t matter that I enjoyed this small moment of my life. What matters is the heat I feel rising in my veins (see: Shame, Anger). I’m smarter than this, knowing to always keep myself out of a scent trail.

Days later, one of the local station’s lead stories—video shot in the dappled afternoon light of a patch of tall grass near a stream. Two deputies stand over a blanketed lump, bones of what appears to have once been a foot peeking out. In the background I see a boulder with a peace sign spray painted in blue on it.

I had leaned on that boulder to slip my boots back on.

(How do you wrap your head around this?)  If you ever figure it out, let me know.

I hate to use the word “lucky” to describe how incredibly stupid I still feel for cornering myself with a strange man on a deserted mountain road, but lucky I am (putting the onus on my shoulders yet again).

Why do my actions matter? Because we have made it so. And I hate that about this world.

Some say rage can only be absolved by forgiveness.  My reply is this—I doubt they’ve ever truly experienced rage, then.

Forgiveness is a shade of yellow I’ve never allowed to color my walls.

L Mari Harris’s most recent work has appeared or is forthcoming in Pithead Chapel, Tiny Molecules, Crack The Spine, Cheat River Review, Trampset, Bending Genres, among others. She lives deep in the woods of central Missouri. Follow her on Twitter @LMariHarris and read more of her work at www.lmariharris.wordpress.com. 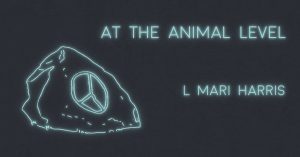